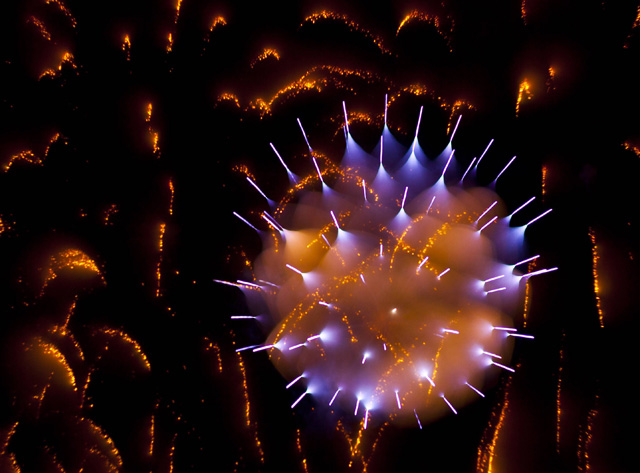 While attending the International Fireworks Show in Ottawa, Canada earlier this month photographer David Johnson had his camera in hand to document the night. When Spain’s entry into the competition begin he decided to try something a little different resulting in the photos you see here which are unlike any long exposure firework shots I’ve ever seen. Via email David tells me how he accomplished the effect:

The technique I used was a simple refocus during the long exposure. Each shot was about a second long, sometimes two. I’d start out of focus, and when I heard the explosion I would quickly refocus, so the little stems on these deep sea creature lookalikes would grow into a fine point. The shapes are quite bizarre, some of them I was pleasantly surprised with.

What’s interesting is that unlike usual firework photos that seem to make long trails across the sky, Johnson’s photos look like flowers with little triangular plumes coming to a point. Pretty amazing.