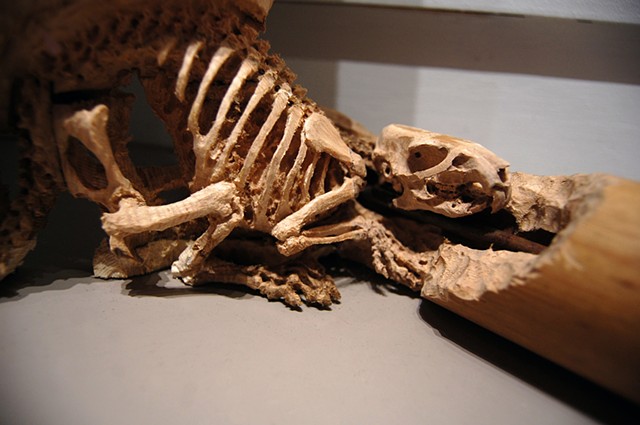 Montreal-based artist Maskull Lasserre (previously) recently completed a new body of work for an exhibition titled Fable at Centre Space gallery in Toronto that ran through January 19th. Lasserre is known for his incredible ability to carve anatomical forms of animals, people, insects and other forms out of inanimate objects such as doors, tables, pianos, and even instruments. In a two part interview with Liana Voia (part 1, part 2) the artist discusses the intent behind his work:

When the remnants of life are imposed on an object, and that’s true especially with the carving work that I do, it infers a past history or a previous life that had been lived, so again where people see my work as macabre, I often see it as hopeful, as the remnants of a life. Despite the fact that the life has ended, at least that life had a beginning and middle as well, so often by imparting these bodily elements to inanimate objects it reclaims or reanimates them in a virtual way.

The objects in Fable included a crow skeleton carved into a chair and axe, a vulture skull carved into two hand planes, a human ear carved into a violin and case, a rat carved into a door and rolling pin, and an incredible rhinoceros beetle taking flight from within an upright piano. You can learn more over on Center Space.