Airborne in the Bronx: Jose the Amazing Photographed by Chris Arnade 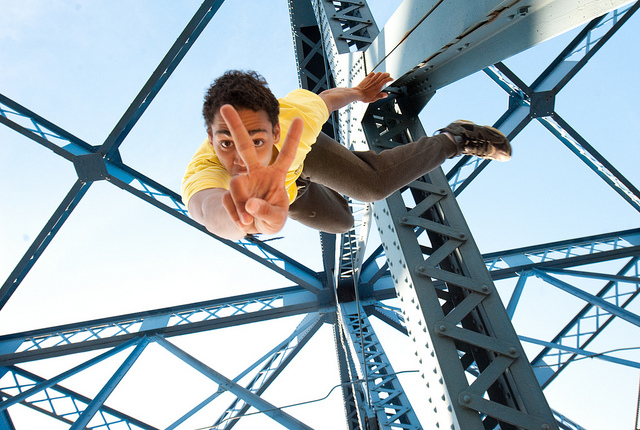 For the last several years photographer Chris Arnade has virtually embedded himself in an area of the South Bronx called Hunts Point, one of the poorest congressional districts in the country, where poverty and addiction has laid claim to countless struggling individuals. His unflinching and candid documentation of addicts and prostitutes in Hunts Point, Faces of Addiction (warning: graphic and occasionally nsfw), has gained international attention.

One individual Arnade has encountered over the years is a young resident named Jose Garcia, who, along with several of his friends, have a penchant for doing wildly dangerous jumps and flips off of high platforms such as broken-down trucks or buildings. The spectacular photos have grown into a small offshoot of his Hunts Point work called Jose the Amazing. Of his first encounter with Jose, Arnade shares:

Last year I was in a desolate part of Hunts Point, talking to a friend. A group of about ten teenagers came down the street, loud, filled with energy, and seemingly marauding (kicking over cones, jumping on and over stationary cars, etc). I have never had a problem in my twenty years in New York City, but that does not mean I don’t stay aware. As they passed, out of the corner of my eye I spotted Jose do a back flip over a hydrant. Amazed, I yelled out to him. He and his friends, who were also warily eyeing me, thinking I was a cop, were planning to run away but his friend Henry had a sprained ankle, so they stood their ground.

Since then I have come to grow very fond of Jose and his friends, and have done many photo shoots together. Big fans of Parkour, Hip-hop, and Anime, they are fighting against an area where the pressures of poverty, drugs, and limited opportunity weigh heavily.

For me it’s another lesson in expectations. All of my accumulated baggage from popular culture signaled for me to get away from these kids and their bad intentions, all theirs told them to get away from the cop who would treat them unfairly. Neither of us did that, and because of that I certainly have learned a bit more about the Bronx.

As often happens with documentary work like this, Arnade occasionally finds himself drawn into his subjects’ lives as he is unable to walk away after setting down the camera. One such person is Jose, who is filled with optimism, energy and possesses an uncanny physical ability, but is now dealing with extreme adversity. While putting together these photographs Arnade mentioned if anyone connected to any form of acrobatics, circus arts, or stunt work in the NYC area might know of a way to help, they can get in touch. Serious inquiries only. All photos courtesy the photographer.