Artists Chadwick Gray and Laura Spector of Chadwick & Spector create detailed reproductions of historic artworks by painting them on the human body. While both artists collaborate on each artwork, Chadwick is generally the canvas while Spector does the painting. The resulting body of documentary photographs form their ongoing body of work titled Museum Anatomy. Via their artist statement:

Museum Anatomy is a collection of documentary photographs of works from museums around the world that have been recreated onto the human body. The artwork goes through a significant process until reaching the final outcome, a photograph of Chadwick, sometimes unrecognizable as a human form, with an elaborate, detailed painting covering a portion of his body. The recreated paintings of these historic portraits recapture the subjects in their own moment in history. The resulting photographs reveal a unification of art combining antiquity, history and technology in a contemporary context.

What initially starts as a bizarre attempt to visually untangle the artwork from Chadwick’s body becomes a strangely rewarding exercise as you look from piece to piece. It’s an uncanny feeling when you think an area of the artwork is a human body part but you eventually realize the opposite is true.

If you want to see some of the pieces up close you can stop by The Big Show at the Lawndale Arts Center in Houston, Texas starting July 12th, or see their first solo show in the U.S. since 1999 at the Georgetown Art Center opening October 4th. All imagery above courtesy the artists. (via juxtapoz) 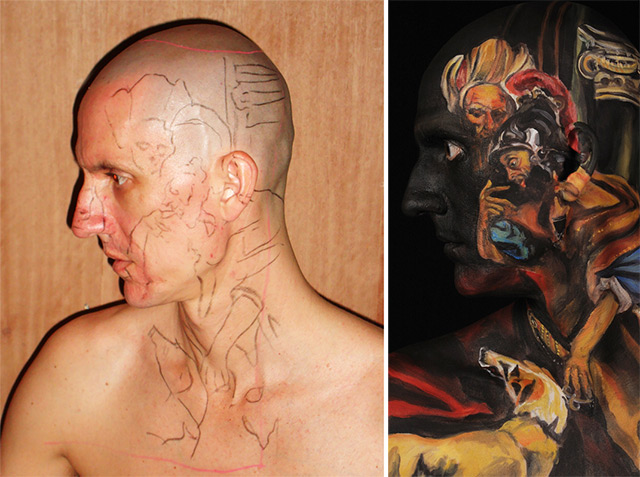 Leda and the Swan, after Correggio Judith with head of Holofernes, after Cranach