Designed by Austrian architect Lukas Galehr for the recently-opened ‘Disco Volante’ pizzeria in Vienna, this fully-functional pizza oven has been designed to look like a gigantic reflective disco ball. And yes, it even rotates. Via Madame Mohr:

According to the clients wish the restaurant should not only carry the atmosphere of a southern Italian pizzeria but also transport the lightness of the “Italo-Disco” era of the 1970s and 80s.

The heart of every pizzeria is the wood fired oven which in this case is a giant disco ball with a rotating mechanism. After the dough is run out the Pizzaioli start the engine and the oven begins to slowly turn with about 1 revolution per minute.

You can see many more photos here and over on iGnant. Photos by Lukas Schaller. (via Dezeen) Back in April we took a peek inside the near complete transformation by fifty street artists of the Les Bains nightclub prior to its demolition. Included in that post was an image of an incomplete work by graffiti artist Le Module de Zeer. The sprawling organic work seems to split the room in two as various forms dominate the walls, ceiling and floor. Watch the video by Yann Rineau to see the piece come together through to completion. For his third and final investigation in his “Paint Action” series Swiss photographer Fabian Oefner (previously here and here) created a series of flower-inspired paint formations titled Orchid. To make the images Oefner poured numerous layers of paint with a top layer of either black or white onto which he dropped a colored sphere. The resulting splash forced the colored paint up and out of the top layer resulting in the crowning splashes of color you see here. While working on the project the Creator’s Project stopped by the photographer’s studio for a discussion about how he works.

Food Sculptures Made with Fruits and Vegetables by Dan Cretu 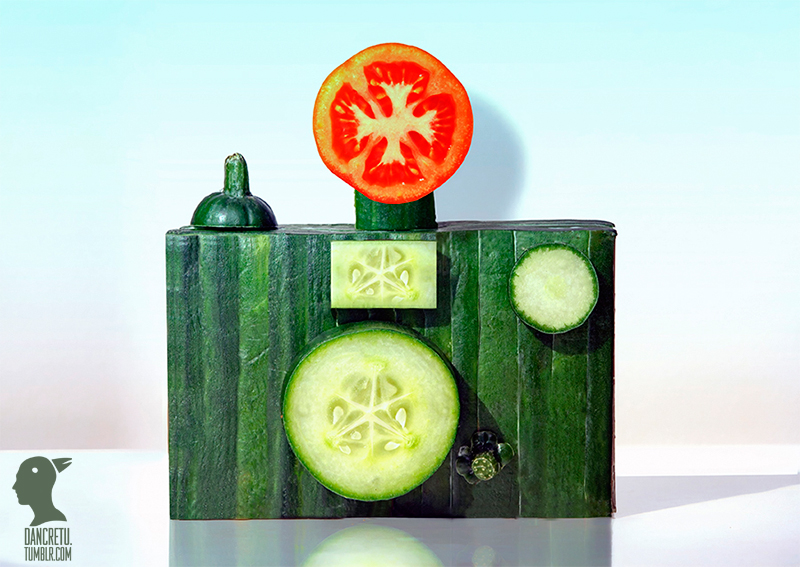 Romania-based photographer Dan Cretu creates all sorts of fun everyday objects like cameras, radios, and bicycles using cut fruit and vegetables. Cretu says the pieces aren’t digitally altered and that due to the organic nature of the medium, each piece has to be constructed and photographed in less than four hours. You can see much more over on Tumblr, and just launched an Etsy shop where you can get prints of his work. Currently on view on the roof of the Madison Museum of Contemporary Art in Wisconsin, ‘Picnic‘ is a new functional sculpture by arist Michael Beitz (previously here and here). The roller coaster meets picnic table is made out of plywood and took the artist nearly a year to build using a special jig the artist says was reminiscent of a medieval torture device. Beitz is known for transforming pieces of wood furniture like sofas, chairs, and tables into twisting and undulating sculptures, many more of which you can see on his website. All photos courtesy Michael Beitz.