Cal Lane works in a series of “Industrial Doilies”, producing works that use contradiction to create an empathetic form. Lane imparts highly industrial materials with touches of delicacy, adding filigree to car parts, oil tanks, and shovels with a blowtorch. Her chosen patterns also exist on another level, their compositions inspired by those used in religious ceremonies such as weddings, christenings, and funerals.

Lane’s use of lace simultaneously hides and exposes the materials in which she chooses to work, revealing and covering up tough materials with delicate pattern. Through this notion, Lane also institutes a sense of humor explaining, “Like a Wrestler in a tutu, the absurdity of having opposing extremist stances is there for reaction and not rational understanding; the rational discussion arises in the search for how one thing defines the other by its proximity.”

Lane has studied painting, welding and sculpture and holds an MFA in Sculpture from the State University of New York. She exhibits works with galleries internationally including ones located in Montreal, Santa Monica, and New York City. All images here courtesy Art Mur. 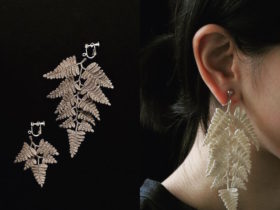