A native of The Netherlands and now based in Australia, Amok Island depicts flora and fauna that can be found in the locations of his colorful murals. The artist’s distinctive minimal style is reminiscent of recent trends in digital design. However, his analog use of flat fields of color and geometric shapes to interpret the nuanced forms of animals and plants is a fresh take in the current mural scene.

Amok writes on his website that if weren’t an artist, he would be a biologist. He takes many of his own reference photos (including underwater), and titles each mural with the name of the plant or animal. The artist describes his passion for the natural world:

The theme of natural exploration and conservation is a strong and constant undercurrent of Amok Island’s artistic practice. His lifelong fascination with nature and her relationships and history with mankind drive the artist’s obvious appreciation and obsession with his subjects and his urge to direct the attention of his audience to them.

Amok has finished murals in twenty five countries and counting, and also creates smaller paintings, which he sometimes editions as prints. You can see more work on his website, as well as on Facebook and Instagram. Collaboration with Georgia Hill and Thomas Jackson in Erskineville, Sydney 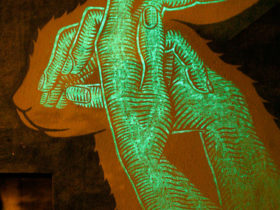