Photographer Mandy Barker creates deceptively eye-catching images to document the pandemic of plastic debris in the world’s waterways. Barker, who is based in Leeds, UK, works closely with scientists to collect trash from our oceans and beaches on the edges of nearly every continent. One research expedition covered the debris field (stretching to Hawaii) that resulted from Japan’s 2011 tsunami and earthquake; she has also explored the Inner Hebrides in Scotland with Greenpeace.

Barker manipulates her findings in Photoshop, mimicking the manner in which ocean water holds these objects in suspension. Swirls of colors and patterns draw in the viewer’s eye, only to realize that these visually appealing compositions consist of garbage that animals have attempted to chew, plastic pellets, tangles of fishing line, and water-logged soccer balls. The artist describes her work in a statement on her website:

The aim of my work is to engage with and stimulate an emotional response in the viewer by combining a contradiction between initial aesthetic attraction along with the subsequent message of awareness. The research process is a vital part of my development as the images I make are based on scientific fact which is essential to the integrity of my work.

Barker is currently a recipient of a 2018 National Geographic Society grant. Her work is on display through April 22nd at Mexico City’s Museum of Modern Art, at Photo London Art Fair in May 2018, at the Triennial of Photography in Hamburg in June, 2018, and at BredaPhoto in The Netherlands in September 2018. The artist’s book, Beyond Drifting: Imperfectly Known Animals, was named one of the ten best books of 2017 by Smithsonian. You can see more of Barker’s photographs on her website as well as on Instagram, Facebook, and Twitter. 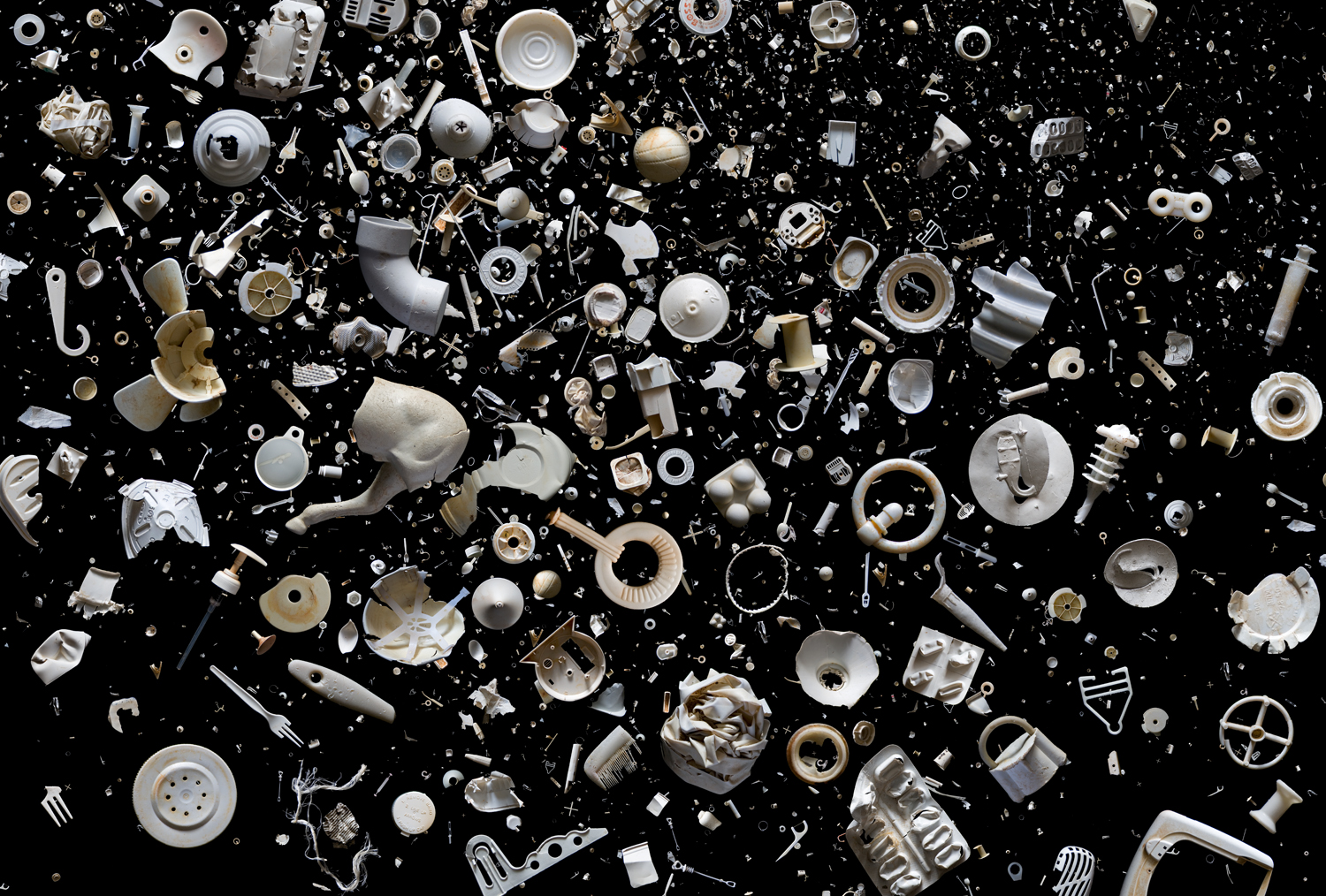 Hong Kong Soup:1826 – Lighter © Mandy Barker. Discarded cigarette lighters make reference to our single-use throw away society. The panda, a national emblem of China represents endangered species and faces away from the group symbolizing mother nature turning its back on man’s inability to take ownership of its waste. Hong Kong Soup:1826 – Spilt © Mandy Barker. 150 tonnes of pre-production plastic pellets (nurdles) spilt from a cargo container during Typhoon Vincente on 23rd July 2012 adds to Hong Kong’s waste issues in its seas and on its beaches. 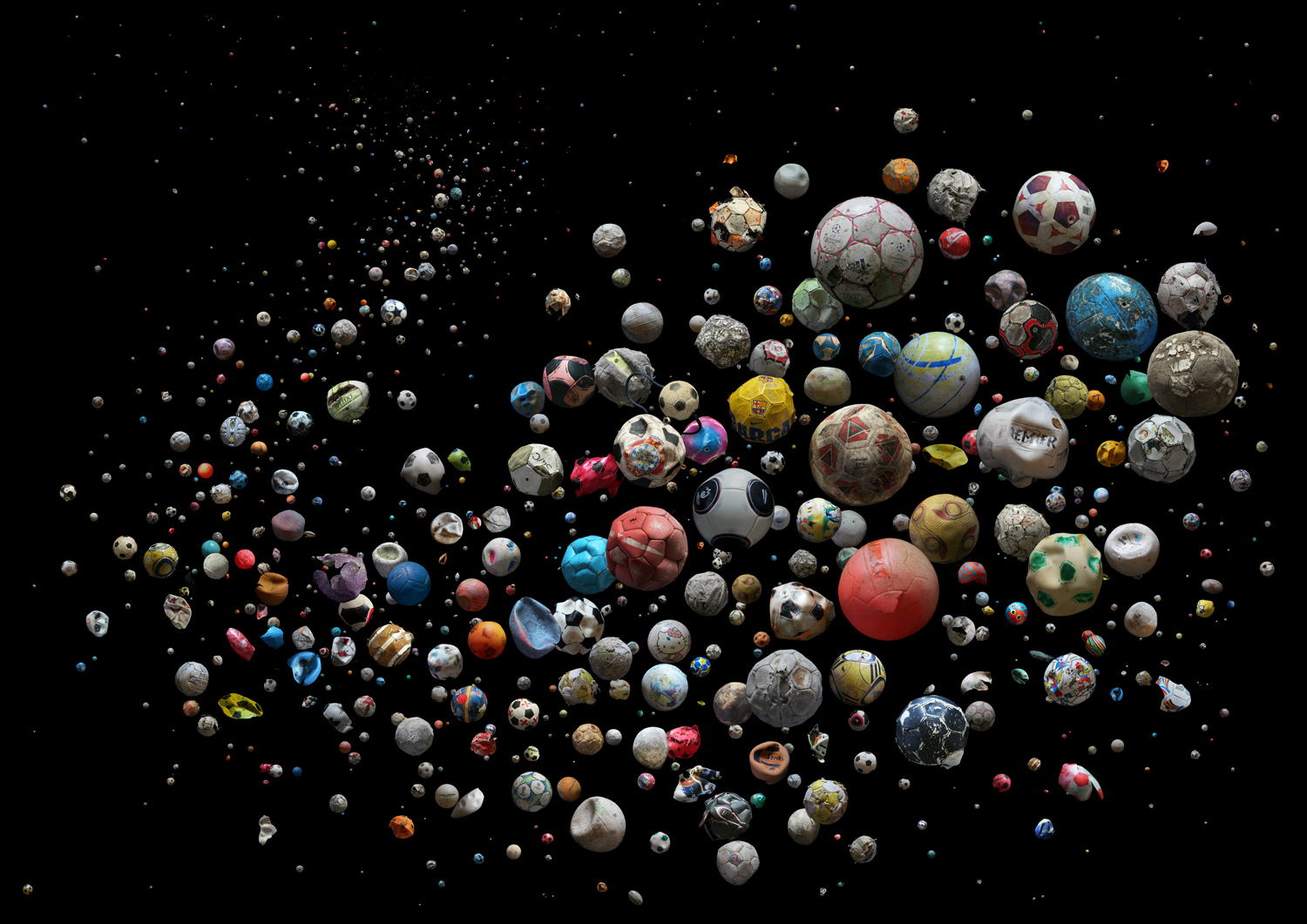 PENALTY – Europe © Mandy Barker. 633 marine plastic debris footballs (and pieces of) recovered from 23 countries and islands within Europe, from 104 different beaches, and by 62 members of the public, in just 4 months. PENALTY – The World © Mandy Barker. 769 marine plastic debris footballs (and pieces of) collected from 41 countries and islands around the world, from 144 different beaches and by 89 members of the public in just 4 months. WHERE © Mandy Barker. Ingredients; marine debris balloons collected from around the world. WHERE (detail) © Mandy Barker. Ingredients; marine debris balloons collected from around the world.