This short video from the Cornell Lab of Ornithology documents the spectacular plumage and mating dance of the Vogelkop Superb Bird-of-Paradise. In order to catch the attention of its female counterpart, the male Bird-of-Paradise flips its cape of black feathers into a large ruff that surrounds its head, while also fanning out an iridescent azure blue skirt of feathers from its breast. In a paper published by Timothy G. Laman and Edwin Scholes, this Indonesian bird was recently confirmed as a separate species based on its courtship behavior. You can learn more about the Vogelkop Superb Bird-of-Paradise in another video from Cornell and watch more videos about all things avian on the Lab’s YouTube channel. (via The Kid Should See This) 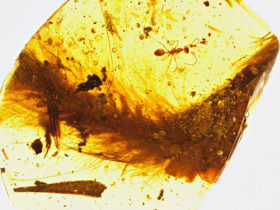