New York City’s historic Fireboat John J. Harvey has been transformed into a dazzling display of red and white marbling in a new piece by artist Tauba Auerbach (previously). Flow Separation is a co-commission by the Public Art Fund and 14-18 NOW, a UK arts program created for the 100th anniversary of the end of World War I. For the new piece Auerbach used the visual language of early 20th-century dazzle camouflage, a technique invented by British painter Norman Wilkinson during WWI to distort a ship’s form and confuse enemies who might be tracking its direction or speed.

Auerbach was also inspired by the pattern created by a wake when an object moves through water, which is referenced in the work’s title. The ship flies a flag that diagrams “flow separation,” a phenomenon that occurs when areas of fluid in a wake move backwards and create eddies. To imitate this form for the design of the boat she floated inks on a fluid bath and transferred this process to paper.

For the last four years, 14-18 NOW has commissioned four artists to create Dazzle Ships in the UK, including Carlos Cruz-Diez, Tobias Rehberger, Ciara Phillips, and Sir Peter Blake. Auerbach’s vessel will be the last work in the series, and the first boat to appear in the U.S. The ship will be available for free trips through September 23, 2018, and on view through May 12, 2019. You can visit the boat at Brooklyn Bridge Park, Pier 6 until August 12, 2018, at Hudson River Park’s Pier 25 from August 13 to September 23, 2018, and at Hudson River Park’s Pier 66a from September 24, 2018 to May 12, 2019. You can find more information about tickets and locations on the Public Art Fund’s website. 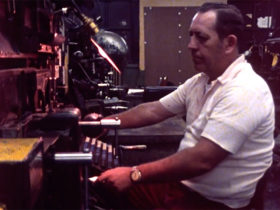