As 2018 draws to a close we decided to take a look back at the most popular artworks, photographs, and yes, hydraulic press pieces we’ve published over the last 12 months. Although 2018 was the year Banksy shredded a painting in front of a live audience, hundreds of other incredible feats of films, art, and design have also caught our attention, including Julie Gautier’s beautiful choreographed video inside the world’s deepest pool, the concentric earth-based mandalas of James Brunt, or our continued admiration of Reuben Wu’s drone-assisted landscape photography. Take a look below to see top posts from this past year, from our tenth most viewed piece, to the design object that takes the spot at number one.

10. The Surprising Result of Crushing Non-Newtonian Fluids and Crayons in a Hydraulic Press

This year we discovered our obsession with hydraulic press videos, specifically clips from Finnish factory owners Lauri and Anni’s Hydraulic Press Channel. The pair sets their press to exert over 2,175 pounds of pressure per square inch—smashing crayons, cheese, soap, and other semi-malleable objects into unrecognizable and often colorful tubes that spring out from the every direction.

9. Foods Distorted Through Liquid and Glass in Photographs by Suzanne Saroff Using glass cylinders and a variety of vessels, photographer Suzanne Saroff fractures the perspective of foods like eggplants, fish, and ripe bananas. The unique viewpoints shorten or elongate the provided edibles, creating distorted scenes that produce a creative glimpse at common fruits and meats.

8. Photographer Jonathan Higbee Discovers a World of Coincidence on the Streets of New York Street photographer Jonathan Higbee walks the street of New York City prepped to capture unique and coincidental moments. Often graphic elements from vans, murals, and signage will be the key features that interact with everyday passersby, like the wide-mouthed shark and what appears to be a frightened pigeon in the snapshot above. Although we covered LEGO projects or products five times in 2018, our most popular piece that looked at the stackable bricks was a campaign developed by Asawin Tejasakulsin, a senior art director at Ogilvy & Mather in Bangkok, Thailand. The designer imaged playful scenarios in which LEGO bricks interact with the real world, such as a whale bursting from the side of a bookshelf, or a fire-breathing dragon heating a pot of soup.

6. Nearly Frozen ‘Slurpee’ Waves Surge off the Coast of Nantucket Our sixth most popular post came just days after the New Year when photographer Jonathan Nimerfroh captured Jamie Briard surfing on partially frozen waves just off the shore of Nantucket. Although the rare phenomenon of slurry-like waves might only be seen once in someone’s lifetime, Nimerfroh has been able to shoot the effect twice over the last few years. British land artist James Brunt arranges and balances rocks, leaves, sticks, and other natural materials he finds within the landscape near his home in Yorkshire, England. After arranging each object into mandala-like spirals and concentric circles, Brunt photographs his creation and allows nature to again take hold of the materials.

4. Banksy Painting Spontaneously Shreds Itself Moments After Selling for $1.4 Million at Sotheby’s

Moments after Sotheby’s sold a previously unseen version of Banksy’s Girl With Balloon for over 1.3 million dollars, the canvas begin to shred itself into strips as it fell through its ornate frame. After the surprising incident, which had been orchestrated by the infamously secretive artist, he took to Instagram for a follow-up statement to the event saying the piece was “Going, going, gone…” We are longtime fans of photographer Reuben Wu, who uses the aide of drones as aerial light sources to create incredible images of natural and manmade landscapes across the globe, including the brilliant blue rivers of molten sulfur in Indonesian volcanoes, and the thousands of glistening mirrors that compose Nevada’s SolarReserve. For his ongoing series Lux Noctis, Wu used light from his GPS-enabled drones to create a halo effect around cliffs and crests which are only perceptible in the resulting photograph.

1. A Paper Memo Pad That Excavates Objects as It Gets Used

And finally, our most popular post from 2018 was a paper product created by the Japanese company Triad, whose main line of business is producing architectural models. Omoshiroi Blocks are stacks of laser-cut paper that when removed, reveal fantastic sites such as Kyoto’s Kiyomizudera Temple, Tokyo’s Asakusa Temple and Tokyo Tower.

Our editors want to extend a thank you for reading all of the pieces we have explored, obsessed over, and covered in 2018. We look forward to the spectacular artworks, science discoveries, short films, and other intriguing visuals that will be created and discovered in 2019! 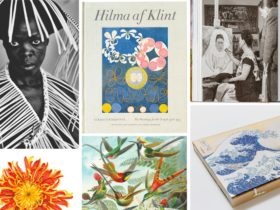