For his horror icons Family: Timorpersonae collection, Wilkinson pays homage to classic slashers and newer terrors including Jason Voorhees, Pennywise the Clown, the Creature from the Black Lagoon, and the demon Valak. For each insect’s zoological nomenclature, Wilkinson creates a Latin phrase that serves as a description of the character or their respective film. For example, his Freddy Krueger “A Nightmare on Elm Street” piece is titled Insomnium ulmusvicus: insomnium from the Latin insomnis (sleep), ulmus (street), and vicus (elm).

For his Family: Insanusmelodiae series, Wilkinson incorporated the faces of iconic Looney Tunes characters into the bodies of beetles and bugs who inherited unfortunate but funny traits from their cartoon counterparts. “Their distinctive characteristics include loud and often odd vocalizations and the very distinctive fast and erratic movements,” the artist wrote in a statement. He added that the “most peculiar aspect of the Insanusmelodiae’s behaviour is their clumsiness. They often meet their end under a falling stone or twig, or after falling from a long drop. Their wings, also vestigial, can produce enough uplift to keep them in the air for a moment or two before they fall.”

To see more of Wilkinson’s buggy mashups, fly on over to his Instagram page. 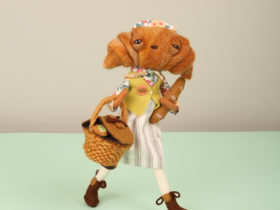