Take an Eerie Walk Through the Empty Streets of Amsterdam, San Francisco, and New York City

With one-third of the world’s population currently under some level of quarantine, the streets of major cities like Amsterdam, New York City, and San Francisco are an unusual and unsettling sight. Film director and cinematographer Jean Counet, who shot “Meanwhile in Amsterdam,” shows the capital city almost entirely deserted. Public transit is empty and a four-minute walk reveals less than a dozen passersby.

Counet tells Colossal that “Meanwhile in Amsterdam” came together like any other film, except that “this time there was no director, and no plan,” he says. “We walked through the old city centre of Amsterdam between 8:30 (and) 13:30 which is normally teemed by walking people and bicycles. What we witnessed felt like a dream. Sometimes beautiful and mesmerizing, sometimes scary and worrying.”

In a similarly bizarre look at San Francisco, stop lights cycle from green to red with no cars passing through and businesses are boarded up. One with a psychedelic facade even has signs that read “We will survive” and “We will get by,” a hopeful gesture derived from the city’s musical legends that directly contrasts the nailed plywood covering the windows.

To see how the global pandemic is affecting public life in New York City and Rotterdam, check out the videos below. (via Kottke) 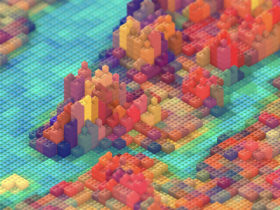