In a neighborhood of tech giants and startups, the San Francisco Center for the Book is decidedly analog. The nonprofit has been a hub for printmaking and book arts for Bay Area creatives since it opened 25 years ago, offering about 300 workshops and classes in papermaking, letterpress, binding techniques, and a range of other processes to thousands of students each year.

Beyond wanting to provide a space for local artists and those interested in the practice, though, one of the center’s tenets is community engagement, a commitment that manifests in the spectacular day-long Roadworks festival. The annual event, which was pared down in 2020 due to COVID-19 precautions, began in 2004 as a way to expand the organization’s footprint beyond its own walls, but it wasn’t until 2013 that it grew into the dramatic occasion it is today. Roadworks celebrated its 18th year this September and brought back its prized activity: printing dozens of linocuts with a 1924 Buffalo Springfield steamroller. All images courtesy of Roadworks, shared with permission

Each year, the center brings in the seven-ton machine from Roots of Motive Power to produce a series of 42-inch square prints in the middle of San Francisco’s streets. The process is as monumental as the event, requiring dozens of volunteers and fast-moving hands to create works successfully in the midday sun and wind. “It’s an interesting printmaking challenge in that you get to practice once a year,” says Chad Johnson, the center’s studio director and a resident instructor who’s been at the helm of Roadworks in recent years. “There’s no replication of all of the conditions except for when you do it.”

The actual process utilizes the street as the base of the press, with an insulating rubber mat on top to counter any debris. A piece of MDF particle board—the team prefers this material to plywood because it has no grain and can distribute pressure evenly—marked with a taped registration system sits on top. Once Johnson inks the plate with the yellow- and purple-tinted pigments specific to Roadworks, he has to quickly position it on the ground and have two others cover it with paper. “The only other trick is keeping the plate wet up until two minutes before. There’s no amount of ink that I can get on it that won’t dry in the wind and the sun,” he says.

After that, the rest is similar to the etching press, although it happens on a much greater scale. The team lays down a plastic tablecloth to prevent steam leakage on the paper, then a wool blanket, and finally a thick rug that serves as an insulator from the massive machine. After two rolls, the team peels off the layers and reveals the finished prints. Roadworks “has the ability to broaden the range of outreach by the sheer fact that it’s a steamroller,” Johnson shares, sometimes printing “Godzilla, sometimes a tree, sometimes a plant.” Most years, the group produces between 30 and 35 pieces within a few hours, although 2021 saw its largest collection of 38. Alongside the larger prints created by a trio of committee-selected artists, the festival also sells linocut kits prior to the event that allows community members to carve their own works and see them realized day-of. “The idea was to get people excited about printing on a grandiose scale, and I think for me, that’s still really an amazing, powerful thing,” Johnson says, noting that these projects also garner essential funding for the nonprofit.

Although this year’s prints are sold out, the center is selling totes that feature a 2004 steamroller design by Rik Olson, a local artist who’s participated in the festival for nearly two decades. You can see more photos from Roadworks 2021 and watch for information on next year’s event on Instagram. 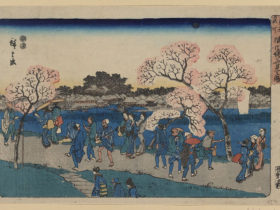