6,000 Strips of Washi Tape Intersect in a Kaleidoscopic Installation by Artist Emmanuelle Moureaux 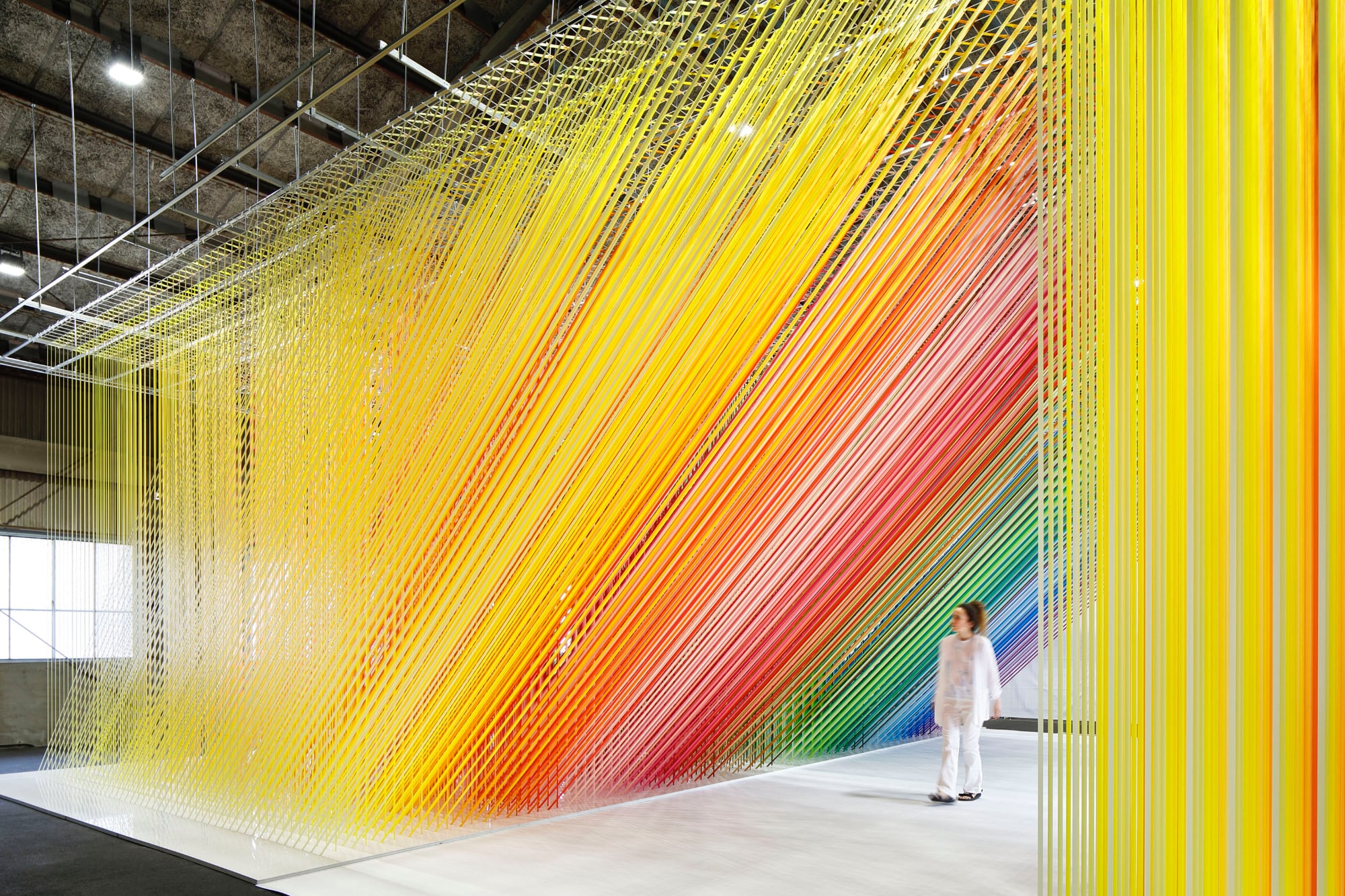 All images by Daisuke Shima, courtesy of Emmanuelle Moureaux, shared with permission One hundred colors and 6,000 strips of masking tape later, Tokyo-based French architect and artist Emmanuelle Moureaux (previously) has constructed an elaborate installation of intersecting lines in Kurashiki, Japan. The immersive work, which was a commission from the brand mt, extends from the factory floor to ceiling in a crisscrossing mishmash of diagonals and pigments. To complete the piece, which is part of Moureaux’s 100 Colors series, the artist fastened 15-millimeter tape in a vibrant, rainbow gradient throughout the space, leaving a tunnel-like walkway for visitors to pass… All images © Emmanuelle Moureaux In an effort to merge the past, present, and future in a single work, Tokyo-based French architect and designer Emmanuelle Moureaux (previously) hung 168,000 paper numbers in rainbow-like rows to create her latest piece, “Slices of Time.” The suspended project contains 100 hues, in addition to white, that are formed into a vibrant cylinder meant to serve as a visual representation of Earth. “She uses colours as three-dimensional elements, like layers, in order to create spaces, not as a finishing touch applied on surfaces. Handling colours as a medium to compose space, her wish is…

140,000 Pieces of Paper Form a Colorful 'Universe of Words' Installation by Emmanuelle Moureaux 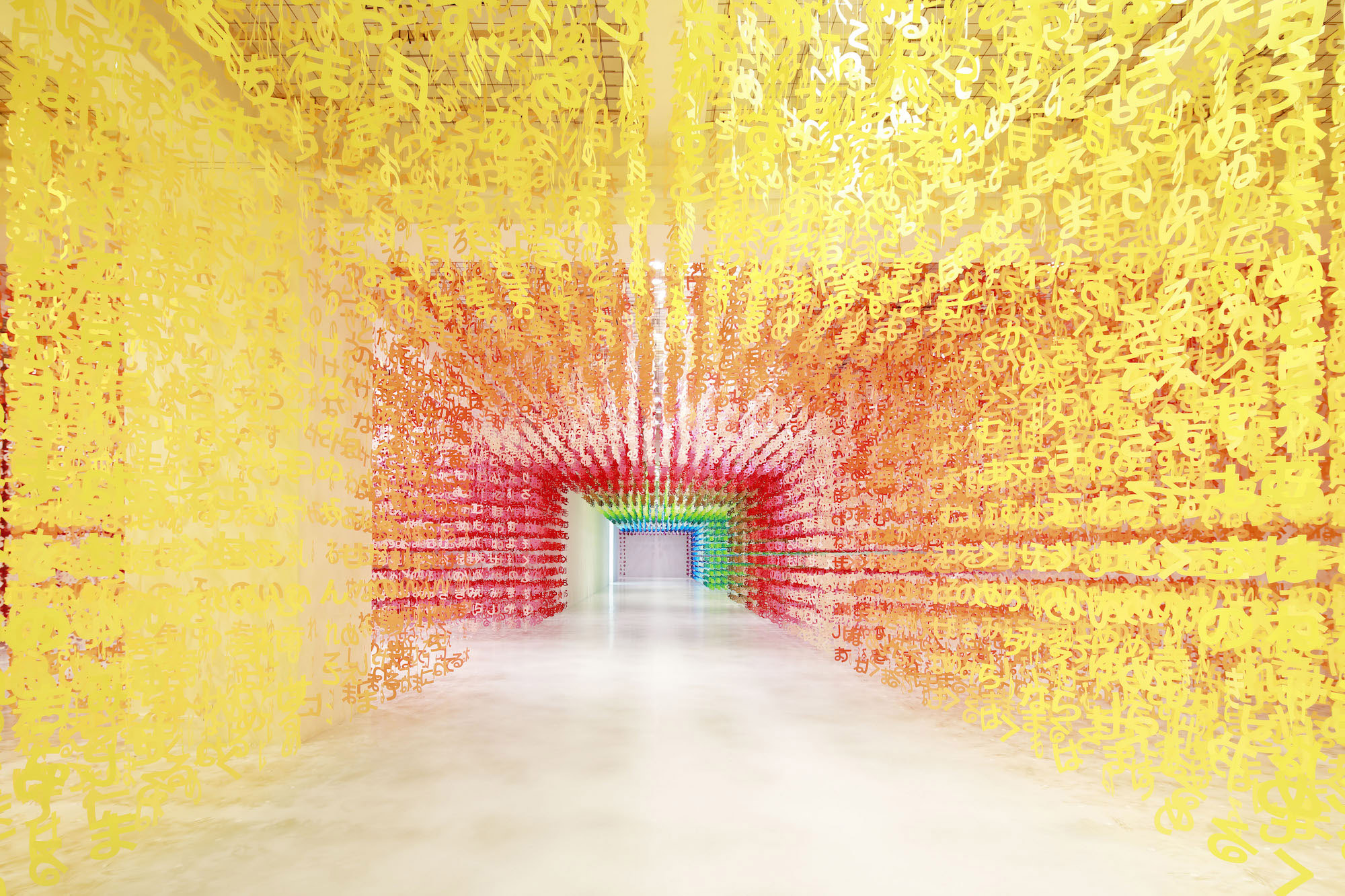 …basic hiragana characters. According to a statement about the installation, Moureaux chose the simple language because of its use during Tanabata. “The universe created by these floating hiraganas evokes an emotion through its stillness and its endlessness.” Aligned in three-dimensional grids by color, sections of the installation were removed so that visitors could immerse themselves in the alphabetical tunnels, viewing them up close while also looking around at the seemingly endless rows of symbols. “Universe of Words” is a part of Emmanuelle Moureaux’s ongoing 100 Colors series. To see more of her artistic and architectural work, follow Moureaux on Instagram…. In celebration of The National Art Center of Tokyo‘s 10th anniversary, French architect Emmanuelle Moureaux was commissioned to fill the institution’s 6500 square foot exhibition space with her vision of the decade to come. Unsurprisingly, Moureaux, whose practice often involves layering color within space, decided to transform the white cube into a rainbow forest filled with more than 60,000 multi-colored numbers arranged in three dimensional grids. The installation, Forest of Numbers, is composed of 10 layers, each to represent the next 10 years. Figures through 9 create the 4 digits needed for each year. The numbers are also divided into…