1,440 Portraits Emerge from a Single Ink Drawing in a New Animation by Jake Fried

In an impressive feat of dedication and patience, artist Jake Fried (previously) spent seven months creating Brain Wave, a hand-drawn animation using only ink and white-out. Fried reworked the same black-and-white drawing 1,440 times, scanning each new iteration into Photoshop and sequencing the drawings to play at 24 frames per second. He then added an original music track that frantically connects the hundreds of drawings into one 60-second video. Centered both literally and narratively around a single, ever-changing face, the short animation takes the viewer through a wide range of emotions, settings, and themes. Because every frame is a new… Animator Jake Fried (previously) is known for his hand-drawn ink and white-out films that incorporate dense imagery and symbolism across a rapidly changing field of view, all photographed frame by frame through nearly 1,500 layers. His latest piece, Paper Trail, introduces a collage-like feel through a lovely layering technique. You can see many more of his films on Vimeo…. Here’s the latest experimental piece from artist Jake Fried (previously) who works with layer after layer of ink, gouache, white-out and coffee on a single canvas to create his bewildering, psychedelic animations….

Down Into Nothing: A New Hand-Drawn Animation with Ink, Gouache, White-out and Coffee by Jake Fried 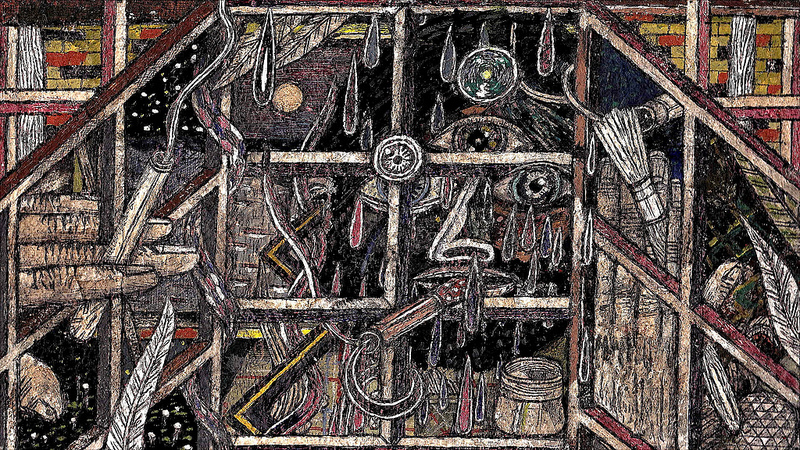 Animator Jake Fried (previously here and here) is back with another one of his super trippy layered animations titled Down Into Nothing. Fried paints and draws with endless layers of white-out, coffee, ink, and gouache which he photographs frame by frame to create each of his videos. Watching Fried’s earlier work it’s amazing to see how far this technique has progressed both in style and in the sheer amount of detail he manages to cram into every frame. Jakes tells me that the surface becomes gradually uneven as he works and some of the unseen bumps and grooves from earlier… Behold the latest work from animator Jake Fried (previously) who works with layer after layer of ink, gouache, white-out and coffee to create deeply textured and truly psychedelic animated shorts. Fried lives and works in Boston where he is primarily known for his painting, but has recently begun focusing on these experimental animations he refers to has “moving paintings,” many more of which you can see on his website…. Boston-based animator Jake Fried just released his latest psychedelic animation, The Deep End, which was drawn entirely with ink, coffee, and white-out. The animation is continually layered on top of itself as forms morph, bend and transform across the screen. I can’t help but wonder how thick the final canvas is with so many layers of illustration. If you were as blown away by this as I was, you’re in luck: see some of his earlier animations such as Sick Leave and Waiting Room….