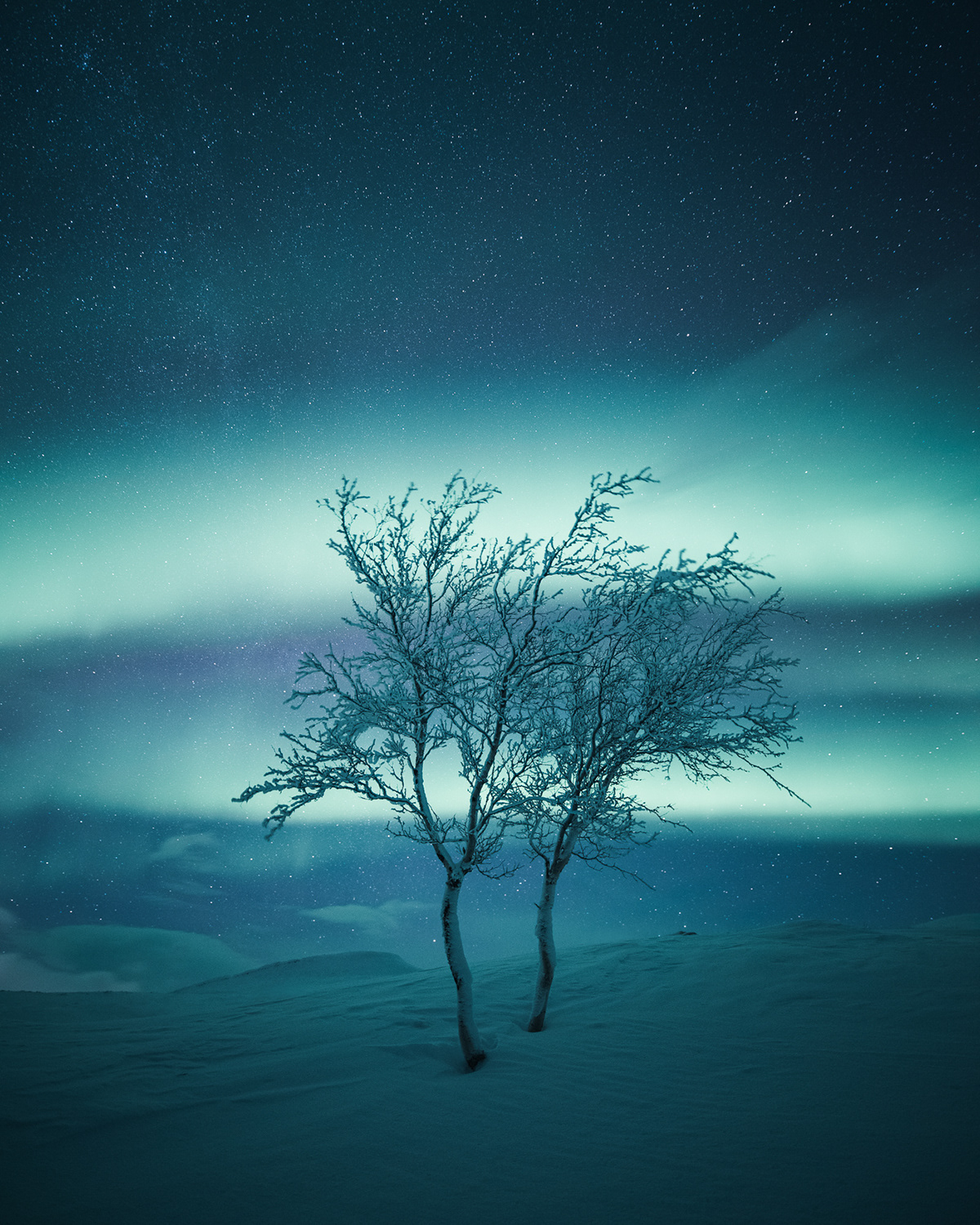 All photographs © Mikko Lagerstedt and shared with permission of the artist Photographer Mikko Lagerstedt (previously) has once again captured the quiet beauty of his native Finland with a recent series centered around trees. Ethereal skies, virgin snow, and seemingly isolated pockets of nature serve as backdrops to twisted trunks and outstretched branches. Taken from Lapland to Southern Finland, the images speak to qualities of beauty and of resilience. Lagerstedt was first inspired to capture these dreamy landscapes when he witnessed one first-hand while en route to a relative’s cabin. His images often showcase nature with little to no sunlight…

We’ve long been drawn to self-taught photographer Mikko Lagerstedt’s (previously) dreamy composite photos of Finland and Iceland at night. In his long-exposure images, meteors are seen streaking through the sky and frigid waterfalls appear like mist. Lagerstedt composes and edits all of his images in Lightroom and Photoshop and shares numerous tutorials on his techniques through his website. He most recently returned from a photoshoot at a deserted Yyteri Beach in Finland, more of which he shared on Instagram…. 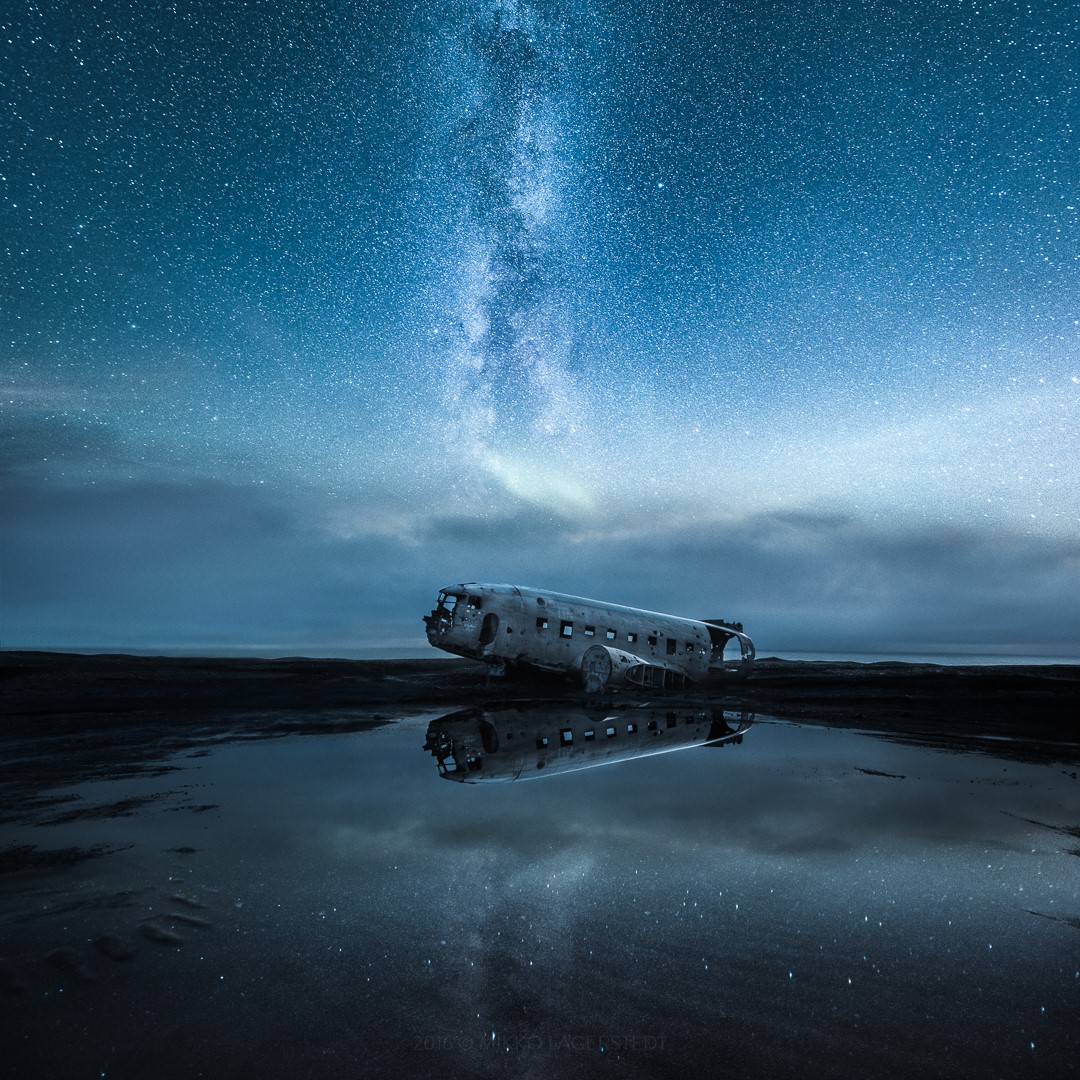 Spending an entire evening under the stars in near pitch darkness, photographer Mikko Lagerstedt (previously) captures spectacular landscapes of frozen tundra and misty mornings of Iceland and his native Finland. With a camera mounted on a tripod he takes a multitude of exposures as the light gradually changes. Certain elements are then stitched together digitally and enhanced with Photoshop and Lightroom—a process he candidly shares in tutorials and presets he sells on his website and blog. The resulting images are a result of hours of photography, editing, and a keen sense of color and composition to create heavily modified images… …at Night, 2014 Self-taught photographer Mikko Lagerstedt (previously) is drawn into the night where he often finds himself camped next to his tripod, waiting hours for an exposure of a frozen coastal scene or a dark and brooding forest. Many of his images are composites of two photos taken from the same location, a shorter exposure of the sky merged with a significantly longer exposure of the ground which is then manipulated in Lightroom. Lagerstedt is extremely open about his process, sharing tutorials and blog posts about how he works on his website. You can also follow him on Instagram…. One night while walking the streets of Porvoo, Finland with a camera in hand, photographer Mikko Lagerstedt (previously) captured the silhouette of a large cat off in the distance lit feintly from behind by a street lamp. Struck by the image, he conceived of a new series called Night Animals, where all kinds of wildlife would prowl the streets of this small Finnish town at night. As much as I want to tell you he raided the local zoo to liberate an ostrich, the images are all composites of two photos, an animal and backdrop, both shot by Lagerstedt. If…

From the Edge of Finland: New Photos by Mikko Lagerstedt Photographer Mikko Lagerstedt first taught himself to use a camera in 2008 and has since fallen in love with the medium, having captured hundreds of dreamlike images of the Finnish landscape he calls home. This latest body of work called Edge was taken exclusively in Finland over the last few weeks and captures perfectly his somewhat unsettling approach to landscape photography that can be equal parts beautiful and just plain eerie, with strange figures lurking just on the horizon. You can follow Mikko’s photography on his blog, via Facebook and on Behance….