All images © Mattias Adolfsson Mattias Adolfsson’s (previously) impeccably detailed illustrations demonstrate his propensity for a controlled frenzy that borders on the chaotic but never quite passes the threshold. The Swedish artist creates fantastical drawings of city blocks, bizarre collections of writing utensils, and intricate menageries of deceased animals that merge science fiction, whimsy, and the absurd. While some of the muted artworks feature a central narrative, like the sea-bound ship below, each of his incredibly intricate pieces are impossible to consider with a single glance, in part because they cover the entire sketchbook spread. For more of Adolfsson’s sprawling… 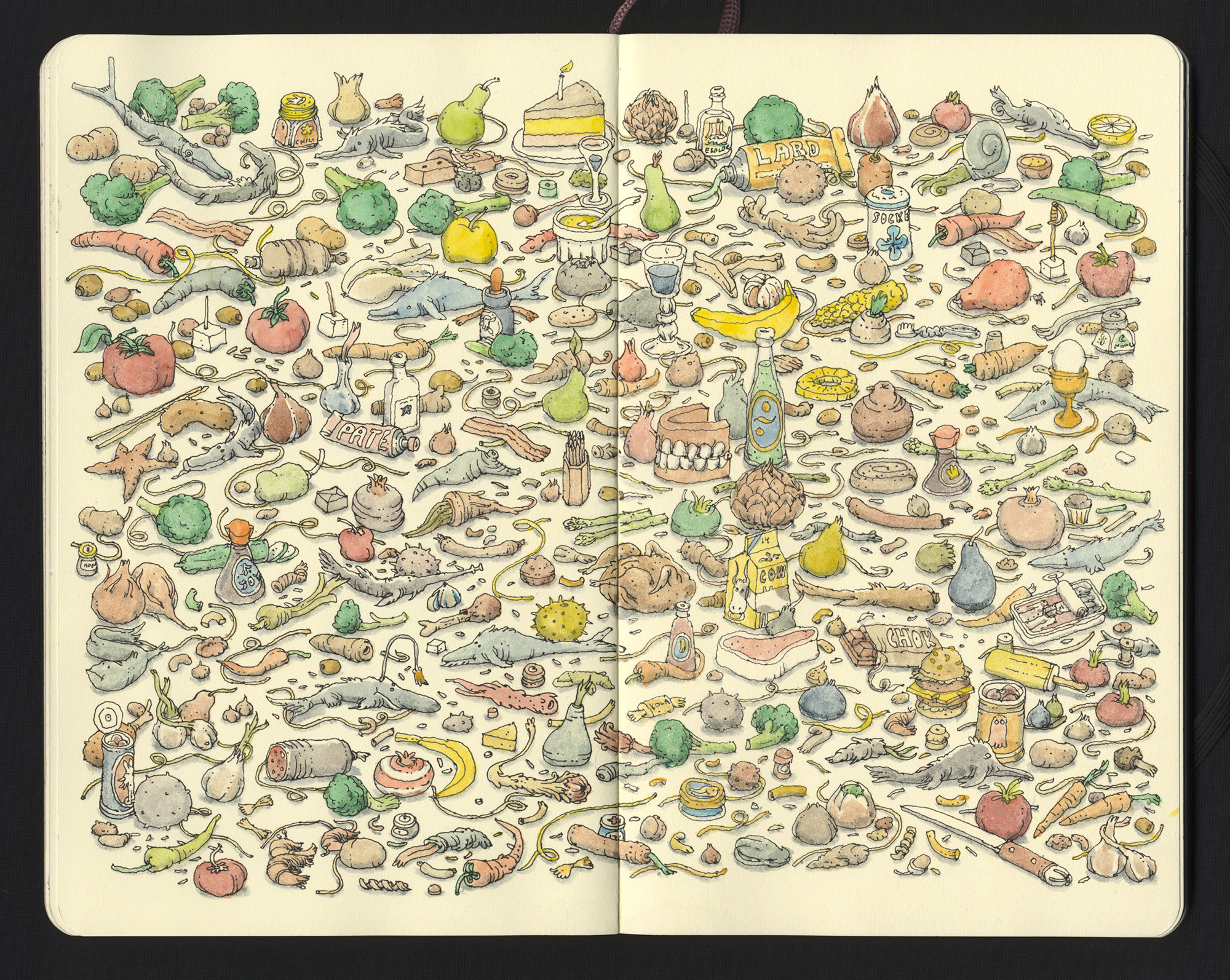 Like a mad hybrid of Where’s Waldo meets Dr. Seuss—with healthy doses of absurdity and science fiction—Swedish illustrator Mattias Adolfsson (previously) fills his sketchbooks and canvases edge to edge with his manically dense drawings of… well, just about anything you can imagine. Around the framework of a known destination such as a small village or the interior of a church, the artist populates nearly every square inch with bands of unruly characters, Rube Goldberg-esque contraptions, and overly complex spacesuits. The purpose of everything seems to be a mystery, but the time spent trying to understand it all is always rewarding,… Exploring sketches and artworks by freelance illustrator Mattias Adolfsson (previously here and here) is an exercise in discoverey with a twist of insanity. The pieces are almost impossible to take in all at once, and represent a collection of bizarre stories, exaggerated characters, and manical devices, all byproducts of Adolfsson’s uniquely dense imagination. Collected here are some posters and sketchbook spreaders from the last year or so, but you can see plenty more in his Flickr stream and in this 2013 interview with Nonsense Society. He also has prints and other items available in his Etsy shop…. Within the sketchbooks of Swedish artist Mattias Adolfsson (previously), strange comic book robots are seen running amok, fantastic steampunk-esque machines sputter to life, and airplane pilots find themselves facing interfaces encumbered with thousands of switches, dials, and tubes. It’s a world that is absurdly complex and meticulously drawn using only a finely controlled pen and a few brushstrokes of color. Above are just a few of my favorites among Adolfsson’s prolific outpouring of work which you can follow on Flickr and Behance. He also has a number of original works available on Etsy including a new accordion fold picture book,…