All images © Zim & Zou These intricate paper ships crafted by Zim & Zou (previously) form a collective perpetually in search of alternate realities as part of “Exodus.” From their layered propellers to their waving pennants, the bright pink, blue, and purple aircraft are constructed entirely by hand. Each body displays multiple geometric patterns created with cut and stacked paper that match the rest of the fleet. The Dordogne, France-based artistic duo calls this personal project “an ode to travel. Thrown in an endless movement, the aircraft colony crosses time and space toward an unknown outcome. Like birds stuck… Paper artists and collaborators Zim & Zou (previously) were invited to create miniature worlds inspired by previous Nobel Prize winners in Literature. The tolerance-themed traveling exhibition Sharing Worlds was organized by the Mohammed Bin Rashid Al Maktoum Knowledge Foundation. The French duo built pieces based on Kristin Lavransdatter written by Sigrid Undset (published in 1920), and One Hundred Years of Solitude written by Gabriel Garcia Marquez (published in 1967). Using their own classic style, the pair created colorful scenes packed with geometric details. Their interpretation of Kristin Lavransdatter was created as an ode to 14th-century Norway with a technicolor city… 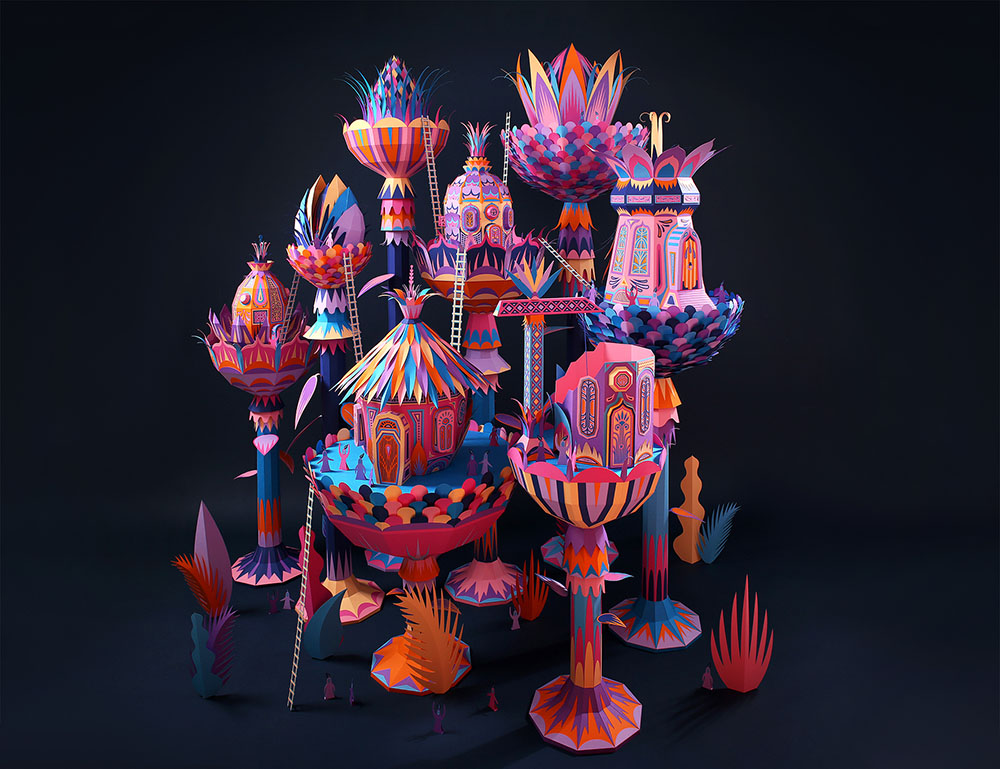 Papercraft duo Zim & Zou (previously) are back at it with one of their most grandiose installations yet for Hermès in Dubai. Each piece is a miniature paper village populated with tiny characters, one centered around towers of fungi, the other based around blooming lotus flowers. Lucie Thomas and Thibault Zimmermann, the names behind Zim & Zou, specialize in designing and building installations out of tangible materials for advertising, product display, and as part of personal artistic pursuits. You can follow more of their recent work on Instagram and Behance…. Master paper crafting duo Lucie Thomas and Thibault Zimmermann of Zim & Zou (previously) continue to create some of the most eye-catching paper illustrations around. The two French designers focus mostly on handcrafted objects made from materials like paper, thread, wood, and leather for one-of-a-kind window displays, editorial illustrations, and posters. Some of their most recent projects include a lovely poster commissioned by the Bill & Melinda Gates Foundation to encourage childhood vaccinations as well as work for the SXSW Film Festival and Hermès Maison Shanghai. See more on Behance…. It’s been over two years since we last featured the work of French duo Lucie Thomas and Thibault Zimmermann of Zim&Zou (previously here and here). The pair of graphic designers create paper sculpture, installations, and illustrations for leading luxury brands, books, magazines as well as their own edification. Collected here are a number of works from the last few years and you can explore much more over on their website and on Behance….

This neon colored mutant hamburger is a new project from French paper-craft extraordinaires Lucie Thomas and Thibault Zimmermann of Zim and Zou (previously) . The piece was made for the February cover of Icon Magazine, and you can see much more over on Behance….