…child who takes refuge in a strange house. Fans of filmmaker Daisy Jacobs and artist BLU will recognize some of the methods used in Cociña and León’s work, including classic stop-motion techniques and painting directly on the walls of the set. Characters shift constantly, whether between two and three dimensions as they morph from murals into sculptural creatures or as they contort their bodies from life-sized forms to massive heads and from human to animal. Cociña and León, who are from Chile originally, have been collaborating since 2007 and lead the Santiago-based production company Diluvio. You can stream The Wolf…

Last year may not have been the most prolific for Italian street art legend Blu (previously), who besides releasing Minima Muralia, a 288-page collection of 15 years of murals, completed only two officially announced murals. His latest piece titled Capita, was recently shared on the elusive artist’s only official communication channel Blublu.org. The mural was painted in Rome’s Rebibbia neighborhood, and was realized in collaboration with Comitato Mammut, a self-managed civic organization. Painted using artist’s intricate illustrative style, the image depicts an imaginary amusement park water slide attraction as a sharp critique of the social injustices of capitalism. The slide…

Minima Muralia: A Collection of 15 Years of Murals by Street Artist Blu The newly published book Minima Muralia condenses more than 200 larger-than-life murals painted by Blu (previously) into one 288-page collection. The compendium covers every piece made by the Italian street artist over the last 15 years, including backstage shots and unreleased works pulled from his archive. A special edition of the book has also been released, featuring a 32-page zine, two posters, and a specially-designed book casing. You can order both releases on Zooo Print & Press. In addition to putting out this recent compilation of his works, Blu has also painted a new mural in the town of La… La Cuccanga, 2017 From climate change to capitalism run amok, street artist Blu (previously) pulls no punches in his soaring multi-story murals on the streets of Italy. While mixed with a healthy dose of sarcasm and humor, the inspiration behind each artwork is anything but funny as he translates searing critiques into aesthetically beautiful paintings. For instance a 2016 piece criticizing housing problems in the Celadina district of Bergamo, Italy depicts cramped residents as a brightly hued rainbow but leaves a small group of authorities in the lower right completely devoid of color. Collected here is a selection of murals…

New 'Green Giant' Mural by Blu on the Streets of Naples Street artist Blu was recently spotted in Naples, Italy putting the finishing touches on this giant green prisoner tearing free from his uniform. The unannounced artwork is supposedly an allusion to the building it’s painted on, a former prison site that is being converted into an open community space. As usual, Blu painted the piece entirely by hand, using ropes to dangle from the side of the building without scaffolding or cherry pickers. See more views on StreetArtNews….

A Dire Evolutionary Timeline by 'Blu' on the Streets of Italy 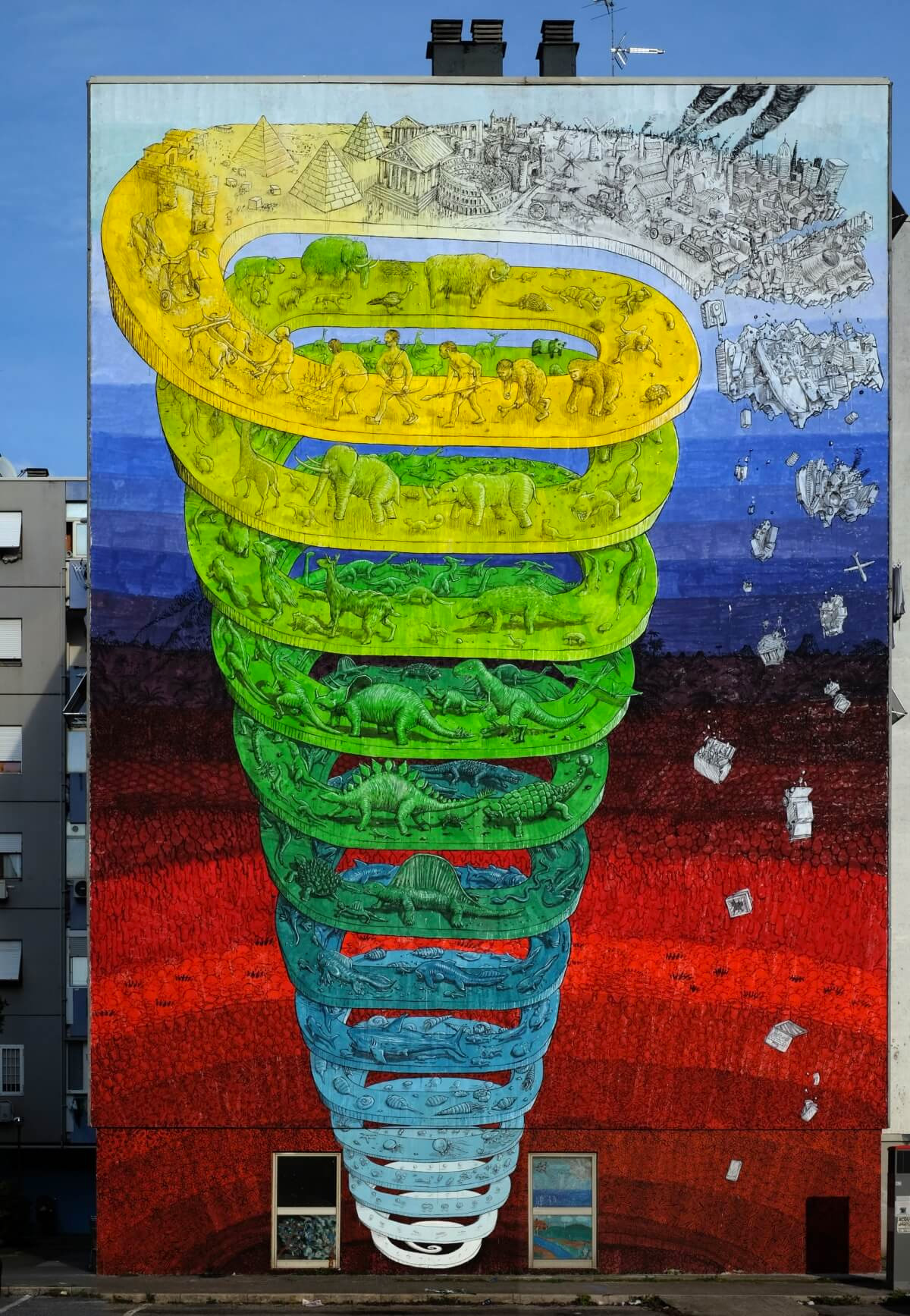 Artist Blu (previously) recently finished work on this staggering mural in Italy depicting a timeline of natural history from the tiniest single-cell creatures at the bottom, through the evolution of dinosaurs and mammals, up to the age of humans. The rainbow-hued evolutionary path eventually crumbles under its own weight, devoid of color, with images of industry and war. You can see a few more views on StreetArtNews….