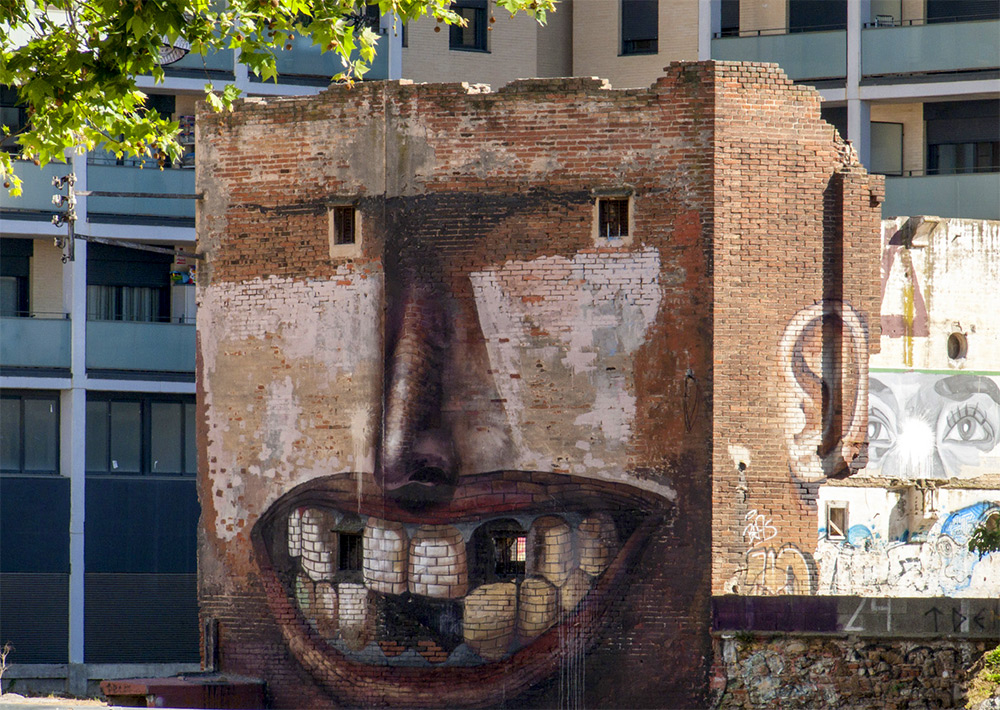 Photo © Joab Jackson Here’s a fun piece by Penao that appeared last year in Barcelona. The artist utilized windows and holes in the side of an abandoned building to create a maniacal face. The mural is part of the Murs Lliures project that helps pair artists with available urban spaces for the creation of public art. If you liked this, also check out more facade faces by Nomerz. (via StreetArtNews, Digerible) Photo © Brodbus Photo © BCN… Since 1997 Brazilian artist Andre Muniz Gonzaga has been turning haphazard, porous, or cracked surfaces into bizarre, misshapen faces in his unique style of street art portraiture. His site-specific paintings have appeared around the world this year in places like Senegal, Portugal, Berlin, Amsterdam and of course his native Brazil, and he’s also known for much more elaborate and polished graffiti murals. You can see much more of his work over on Flickr, and if you liked this also check out the work of Nomerz. (via hi-fructose)… Street artist Nomerz (previously) has been busy lately, cranking out at least four new large-scale pieces in the last few weeks. I really enjoy his blending of graffiti, architecture, and found objects to create each piece….

The Whimsical Street Art of Nomerz I’ve seen a few photos of works by street artist Nomerz floating around for the past year or so and realized it was time to do a proper feature on him here. With a double dose of wit and color Nomerz transforms derelict buildings, towers, and crumbling urban spaces into whimsical, quirky faces in locations around Nizhny Novgorod, Russia. Skip to 0:45 in the video above to watch him create one of his recent pieces, The Fire in the Eyes….