…daily. Once again using one of his most recurring images, a soaring bird, Pejac created an atmosphere of reachable yet fictional freedom. The final piece, Hidden Value, also uses an element that artist has introduced in his previous work: a peeled off corner of an existing object suggesting an alternative reality. Working with people whose everyday life is stripped of life’s basic pleasures, Pejac wanted to provide some sense of luxury to the bas… …magery, such as patrolling helicopters with a spotlight, or a lonely stag, Pejac combines these visuals into a dynamic image that depicts a wild animal caught in the open by an unknown authority. Using fastidious shading and light effects, he uses the unorthodox composite wood medium to create a powerful effect of objects flying around the animal as its surrounding crumble around it. Once again putting a focus on the careless and ignorant bearing…

Waterline: Pejac Unveils New Drawings to Be Exhibited in a Floating Gallery on Paris’ Seine River …ced this new show titled Waterline. To exhibit this selection of new work, Pejac found an old péniche boat that will be transformed into an unconventional floating art gallery from June 20-24th, 2018. Moored right next to Notre-Dame cathedral, this vintage vessel will host his most intimate show to date, presenting a large series of accomplished studio drawings. Works on paper are a crucial part of Pejac’s creative process and are usually the firs… …ime, where he has created two arboreal artworks in Bushwick and Chinatown. Pejac formed Fossil, in Brooklyn’s Bushwick neighborhood, using a brick-sized stencil to spray paint carefully placed shadows on a brick wall. This illusion of bricks sinking back and surging forward creates a pixelated tree. Chinatown’s Inner Strength is fully hand-painted, depicting a cherry blossom branch growing out of a security gate and surrounding by flying swallows…. …l’oeil paintings scattered through the streets of the district of Uskudar. Pejac’s newest series brings an urban resource into the studio rather than having the artist travel out. Utilizing pressed wood as a pseduo-canvas, Pejac draws with black ink and pencil to produce soft deer, birds, and flowers in the works’ foregrounds. These natural elements showcase the wooden medium’s origin, highlighting how natural environments are continuously being c… 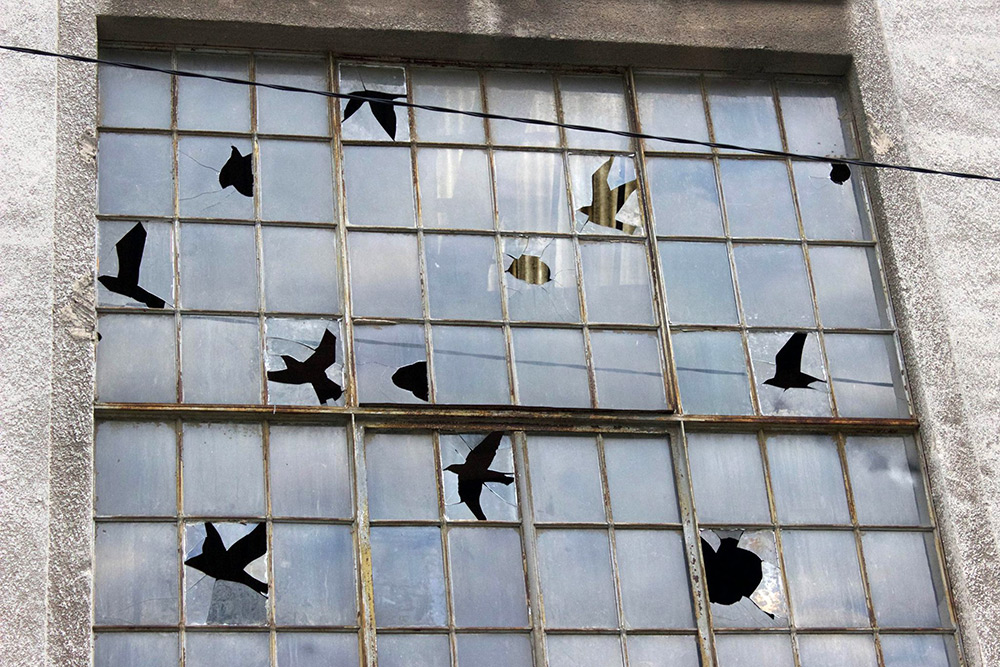 All photos by Sasha Bogojev Barcelona-based artist Pejac (previously) was recently in Rijeka, Croatia where he completed a number of new artworks as part of a residency with the Museum of Modern and Contemporary Art. His most impressive new intervention appeared in the windows of an abandoned power plant where the artist utilized the cracked glass in old windows to form a flock of birds escaping the aim of a boy in silhouette holding a slingshot….

Gravity-Defying Shoes Installed on the Streets of London by Pejac …All photos by Gary Van Handley. For his first ever public intervention in London, street artist Pejac (previously) created four installations of sneakers hanging from lampposts with a slight twist: the shoes dangle up instead of down. The head-scratching installations titled “Downside Up” can be found around East London and are a teaser ahead of a solo show that opens next month….