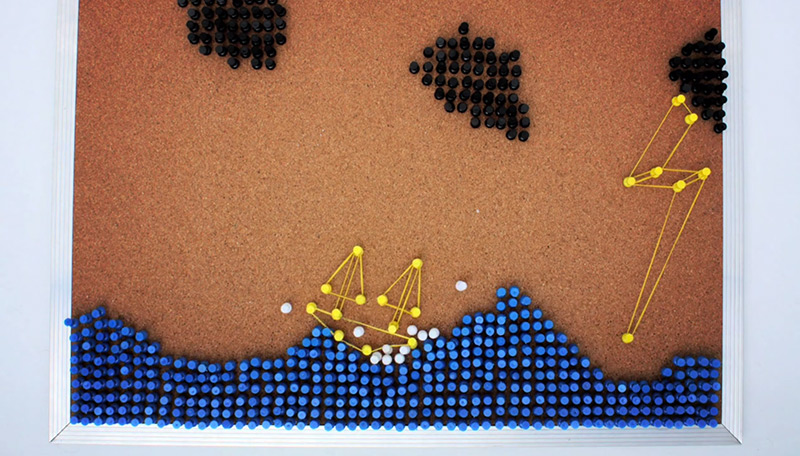 Paint Showers is beautiful animated short directed and animated by LA-based Miguel Jiron. Filmed back in 2011, the piece was made by photographing sequences of paint drips and splashes which were then set to sounds of rain creating an otherworldly thunderstorm of paint. You can see much more of Jiron’s animation work right here. (via Vimeo Staff Picks)

Since 2008 Hungarian/German graphic designer David Szakaly has been churning out some of the most dizzying, hypnotic and wholly original gifs on the web under the name Davidope. His blend of twisting organic forms, flashes of black and white, and forays into pulsing technicolor shapes have inspired legions of others to experiment with the medium, many of whom have been featured here on Colossal. It’s hard to determine the scale of Szakaly’s influence online, but a simple Google image search for “animated gif” brings up dozens of his images that have been shared around Tumblr hundreds of thousands of times.

Szakaly began experimenting with the vector animation program Macromedia Flash back in 1999 where he used the software to create presentations, banners, and other creatives for clients. It was nearly a decade later when he decided to dedicate more time to experimenting with motion graphics and found that Tumblr was a great platform to share his quirky gifs. While he still works in the corporate world on other digital projects, he has also found commercial success making animations for clients around the world. Though it’s his personal work that really stands out. If or when gifs end up on gallery walls, it will be hard to deny Szakaly’s role in getting them there. Artist Caleb Wood created this impressive animation that he drew frame by frame on a wall at Prøve Gallery in Duluth, Minnesota. Titled Plumb, he refers to the piece as a “gallery animation installation.” Wood graduated from RISD in 2011 with a BFA in Film, Animation, and Video (a department headed by Dennis Hlynsky) and has gone on to show his work internationally. You should also check out his other recent animation project Goodbye Rabbit, Hop Hop.