Artist CW Roelle lives and works in Providence, Rhode Island where he creates dense and detailed illustrations using carefully bent wire. While taking a life drawing course in 1997 Roelle was suddenly overcome with the urge to bend the lines he had already committed to paper. That night, and for many nights after, he began to recreate his line drawings with metal wire. You can see much more of his work over on Facebook, and he has some pieces available at 13FOREST. (via faith is torment) 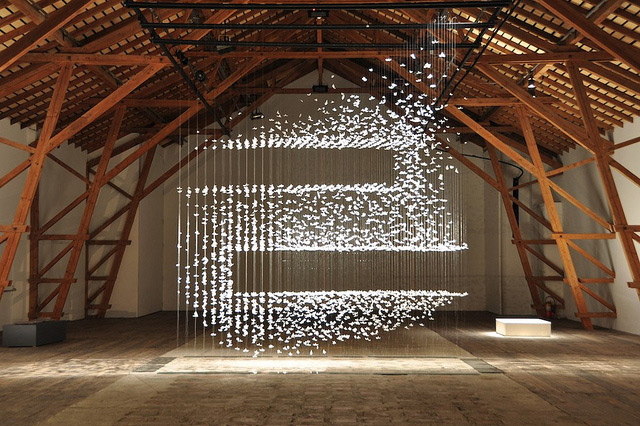 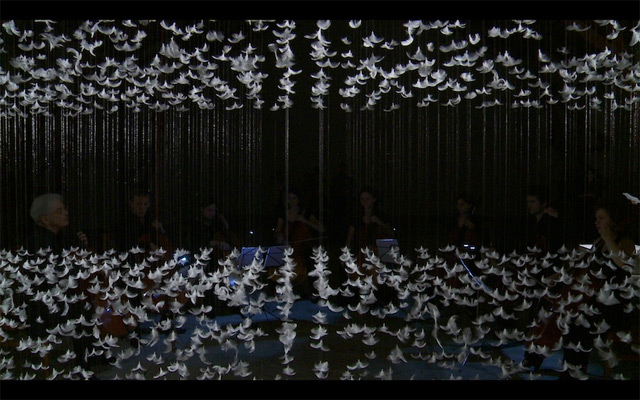 I’m really enjoying these suspended installations by French artist Isa Barbier who uses feathers hung on filament to create abstract geometric volumes. These two works above are definitely my favorite but you can head over to Documents d’artistes to see much more. (via jean-louis pitteloud) 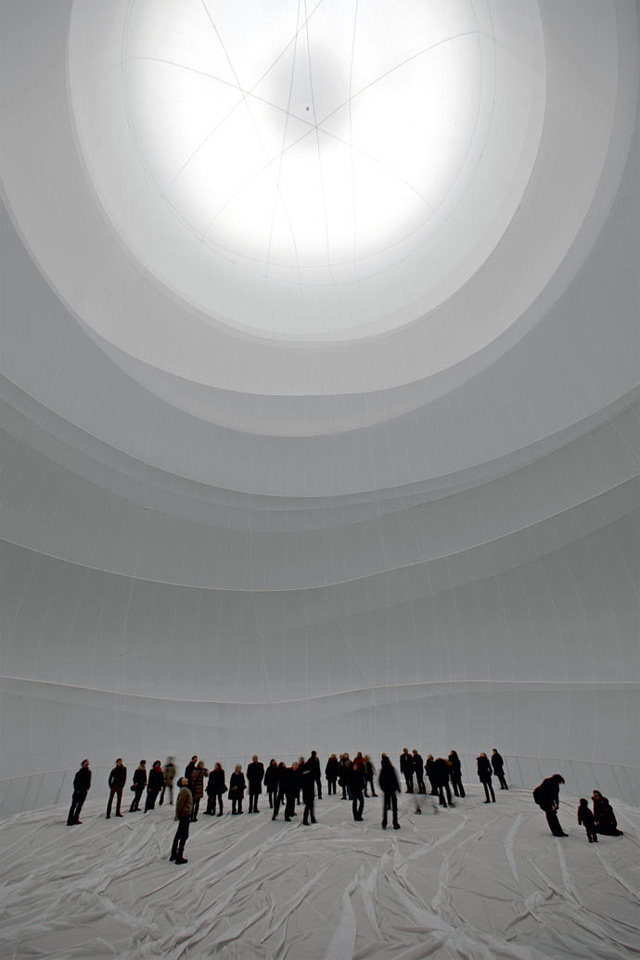 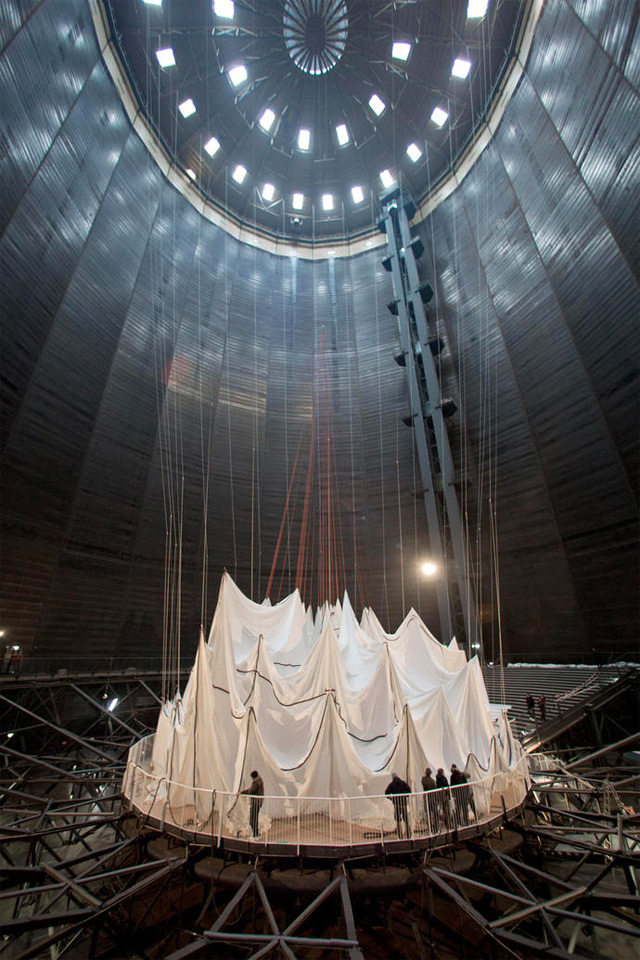 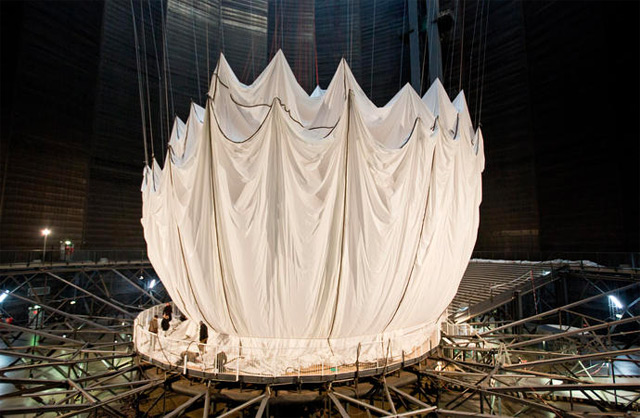 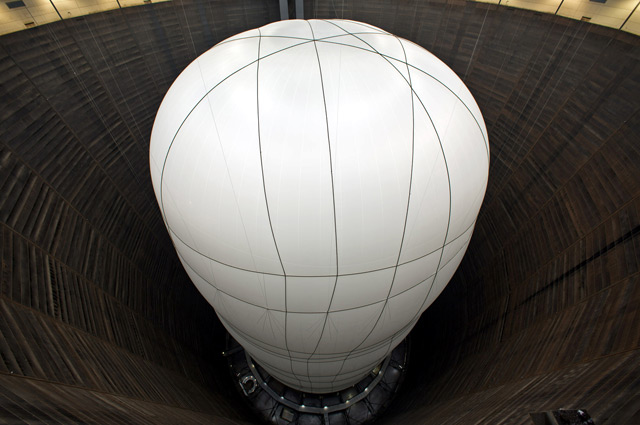 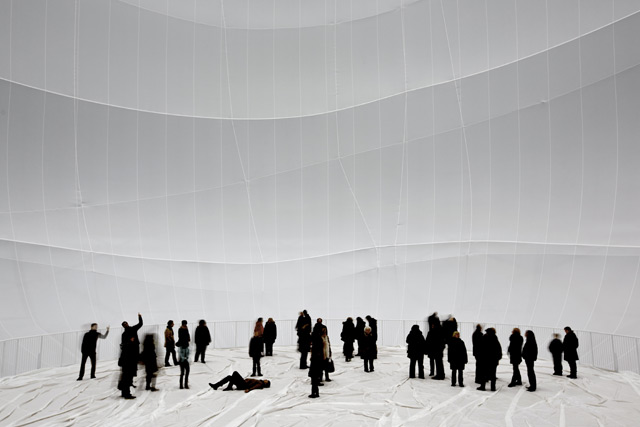 Big Air Package is the latest project from artist Christo installed at the Gasometer Oberhausen in Germany, a facility that still holds the record as the largest disc-type gas holder in Europe that was converted into an exhibition hall in the 1990s. Big Air Package is the largest ever inflated envelope without aid of a skeleton (Gasometer Oberhausen bills it as “the largest indoor sculpture in history”) and reaches 90 meters high, with a diameter of 50 meters and a volume of 177,000 cubic meters. The work was conceived in 2010 and is Christo’s first major work after the passing of his wife and artistic partner Jeanne-Claude in 2009. Via the official press release:

Big Air Package, Project for Gasometer Oberhausen, Germany was conceived in 2010 by Christo and will be on view from March 16 to December 30, 2013. The sculpture, which is installed inside the former gas tank, was made from 20,350 square meters of semitransparent polyester fabric and 4,500 meters of rope. The inflated envelope is 90 meters high and 50 meters in diameter. It has a total weight of 5.3 tons and a volume of 177,000 cubic meters. […] The “Big Air Package” nearly spans the distance from wall to wall of the Gasomter, leaving only a small passage to walk around the sculpture. Two air fans creating a constant pressure of 27 pascal (0.27 millibar) keep the package upright. Airlocks allow visitors to enter the package. Illuminated through the skylights of the Gasometer and 60 additional projectors, the work of art creates a diffuse light throughout the interior. Inside the sculpture, an extraordinary experience of shape, space and light is provided.

Christo says that “when experienced from the inside, that space is almost like a 90-meter-high cathedral,” which is easy to see just looking at these incredible images. The installation opened this weekend and will remain on view through December 2013. You can see many more photos courtesy Wolfgang Volz here. (via farewell kingdom) Hong Kong-based artist Johnson Tsang creates fascinating stainless steel sculptures containing the faces of people that seem to peer out from cascades of frozen liquid. If something seems familiar about these, it’s likely that you stumbled onto his 2002 ceramic work of kissing faces made of poured coffee that has been widely shared online. You can see dozens of the artists works over on Facebook—fair warning, some are exceptionally bizarre such as a human dinosaur, and a cup kissing a saucer. (via my modern met)

Good Vibrations: An Intricately Carved Cabinet Looks Like a Digital Glitch [Updated: It's a 3D Rendering of an Upcoming Piece] 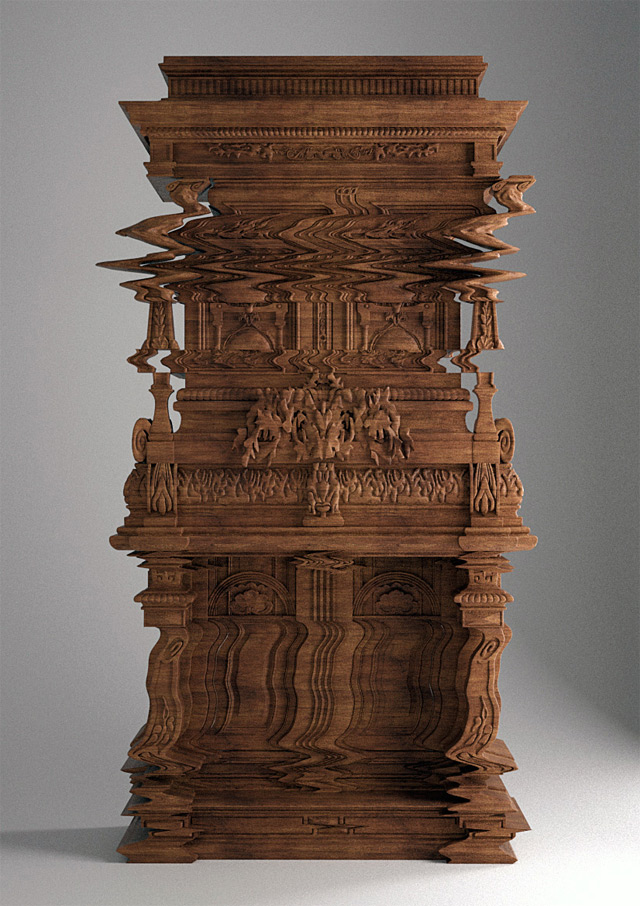 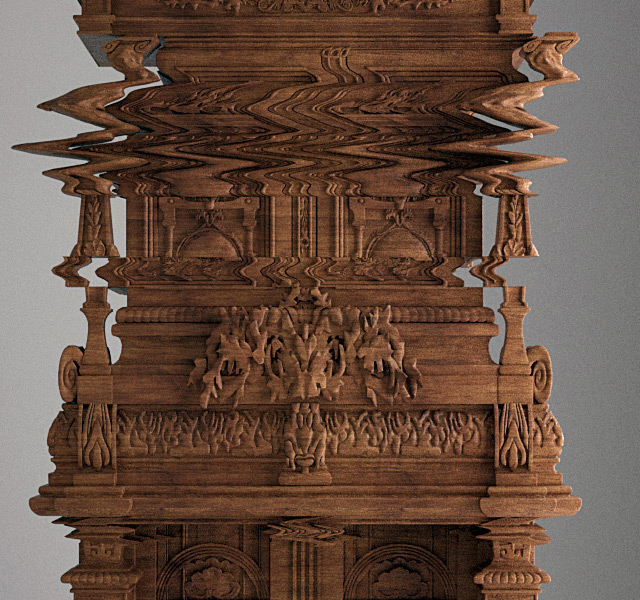 Don’t adjust your web browser, this isn’t a corrupted photograph of a fine piece of Italian furniture (although it may unfortunately be a digital rending, read below). In actuality this cabinet was created by architect Ferruccio Laviani to look just as you see it, like a wavy digital glitch. Titled the Good Vibrations Storage Unit the piece will first appear at Italy’s annual interior show Fratelli Boffi. I’d love to see it from a few different angles, but incredible nonetheless. (via mocoloco)

Update: There has been a healthy amount of skepticism whether or not this is the real deal or a 3D rendering. Having not stood in front of the piece myself I guess we can only defer to the design firm and hope more images of the piece are released soon. One person wrote in to point out that there may be evidence in the photo itself of a repeating pattern which would be the telltale mark of a digitally rendered image. More if I find out.

Update: According to Studio Laviani the image is a rendering, however a final piece of furniture is supposed to be on display in April, so stay tuned.

Even after living here for 14 years I’m always struck by the juxtaposition of Chicago’s towering steel skyline against the brutal midwest winter as it transforms the lakefront into an arctic landscape. Dave Gorum, co-founder and creative director over at Carbonmade, went out last week and shot some footage of the densely packed ice chunks as they sloshed around in Lake Michigan off Lake Shore Drive and then converted them into these great gifs. You can see more over on his Tumblr.