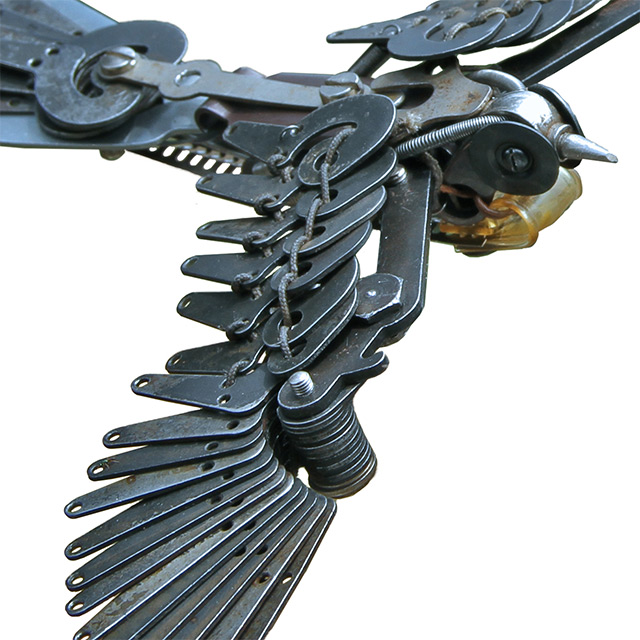 Artist Jeremy Mayer (previously) just completed this beautiful set of swallows using assembled typewriter parts. The pieces required Mayer to find multiple sets of identical parts adding a significant amount of time to sourcing materials, but as a happy accident the artist also discovered his design allowed for the wings to partially retract. If you're unfamiliar with Mayer's work it might surprise you to know that he doesn't use solder or glue (or even objects that haven't originated from a typewriter), but instead assembles everything using only native parts. You can follow his progress for this and other projects over… You’re walking down a street in Brooklyn, gnawing on a piece of gum that’s past the point of flavorful.. In a hurry, you spit it on the ground without a second thought and continue about your day. Hours later, a mysterious woman arrives, surreptitiously collecting the sticky gum from the sidewalk and dropping it into a clear plastic bag which she then carefully labels. Flash forward a month later: you’re walking through an art gallery, and there, mounted on the wall, is a familiar face staring back at you. Astonishingly (or terrifyingly), it’s a 3D print of your face generated…

Underwater Reefs and Landscapes Made of Paper by Amy Eisenfeld Genser Connecticut-based artist Amy Eisenfeld Genser (previously) recently completed a new series of coral reefs that she painstakingly recreates using rolled bits of paper and acrylic paint. Ahead of her upcoming exhibition at the Architectural Digest Home Show, Genser sat down with All Things Paper for a brief interview. An excerpt on her process: These days I usually work with Thai Unryu [mulberry paper], but I have hundreds of papers in my studio from all around the world. I treat the paper almost as a pigment, layering colors one on top of the other to create different colors. My pieces are… If you ask Melbourne-based artist Daniel Agdag what he does, he'll tell you that he makes things out of cardboard. However this statement hardly captures the absurd complexity and detail of his boxboard and PVA glue sculptures that push the limits of the medium. Agdag is an award-winning creator of stop-motion films and this new series of work, Sets for a Film I'll Never Make, feature a number of his structural experiments which he refers to simply as "sketching with cardboard". Miraculously, each work is created without detailed plans or drawings and are almost wholly improvised as he works. You…