Artist Ernest Zacharevic (previously) has been quite busy the last few months with stops in Italy and locations around Malaysia where he just finished a month-long residency in Ipoh. He completed several large murals depicting locals and their way of life, but also painted a few of his signature pieces that humorously depict children or animals interacting with elements of buildings or other nearby objects. Above is a collection of pieces stretching back to December of 2013, but for more of his recent work in Malaysia head over to Arrested Motion. Kuching, Borneo, Malaysia Johor Bahru, Malaysia Johor Bahru, Malaysia…

Jousting Painters on the Streets of Singapore by Ernest Zacharevic A great new piece by artist Ernest Zacharevic (previously here and here) on the streets of Singapore. The artist made several stops in Europe this year with his trademark photo-based murals showing up in Italy, Lithuania and Norway. Zacharevic says of his art: Most of my work is photography based and site-specific, so I photograph my subjects and later choose angles for painting. Working with children allows more anonymity, I don’t consider my artworks to be portraits of a specific person, rather a universal experience. You can see more of his recent work over on StreetArtNews…. Photo by Julina Rashid Artist Ernest Zacharevic has been busy since first appearing on Colossal last summer with his unique style of street art that often relies on the interaction between physical objects and painted murals. The Malaysia-based artist traveled to Brussels and Panang to create new work, and also completed a series of ads for Toyota about parking lot safety. He also appears prominently in a new book about street art in his native Georgetown….

Interactive Paintings on the Streets of Malaysia 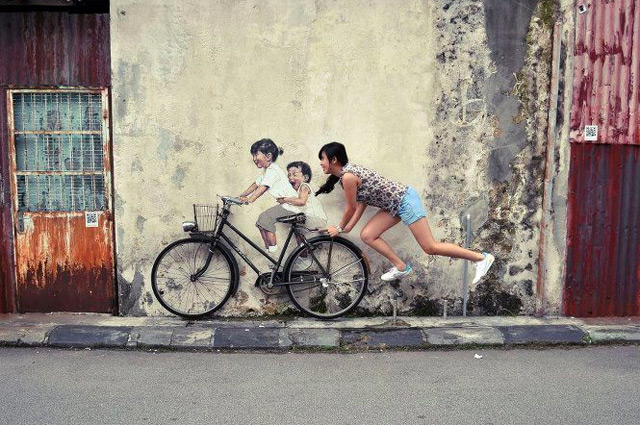 …month. Painter Ernest Zacharevic created four new works where his painted figures of mischievous children are seen interacting with their physical surroundings: an old bicycle, a motorcycle, or even windows on the side of a building. His most popular piece of two small children on a large bicycle has become a major destination in the city with dozens of people stopping to take creative photos. I want to thank Annie and Ross of the very fine AsiaDreaming blog for providing many of the photographs for this post. The rest you can see on Zacharevic’s Facebook. (via lustik, art and seasons)…