From small shells and Amazonian beads, Brazilian-Mexican artist Fefe Talavera strings together elaborate masks that fuse ancient mythologies and contemporary urban culture. The mixed-media works are part of an ongoing series—Talavera shares more on her site and Instagram, along with vibrant silhouettes painted in acrylic and her large-scale murals—that embellish expressive faces with stripes, symmetries, and various geometric patterns. Sometimes spanning upwards of ten feet or featuring a long tuft of straw, the masks are an amalgam of color, motif, and material that blur cultural boundaries and the tenuous distinction between humanity and nature.

The São Paulo-based artist tells Colossal that the series “developed when my government opened the doors to cattle ranchers, when forest fires began, putting an end to Indigenous tribes, exotic animals, and trees,” and initial iterations used açaí seeds, shells, and mirrors to explore birth and death through a mystical lens. “When we looked at our reflection in the work, we would be seeing ourselves with respect and love, and it is this look that we should have with the Amazonia,” she says.

Currently, Talavera is working on a larger-scale piece using 20,000 beads, and she has a solo show planned for May 2022 at Paris’s Bandy Bandy Gallery. Brooklyn-based designer Charlie Baker wrangles unruly branches and twigs into large-scale sculptures and installations that highlight the natural curvature of his foraged materials. Whether cloaking a perfectly round sphere in wood or constructing a treetop nest built for people, he envisions discrete spaces, which are sometimes marked with hidden passageways and windows, that tame the gnarly, knotted wood and present it anew. “I like the sense of motion the curvy pieces create because, to me, it gives a sense that the artwork is living, growing,” he says.

Baker has a background in landscape design, a parallel practice that continues to influence his work. “I am constantly considering how my creations interact with their surroundings, how they tie in with nature. With my artwork, it’s no different,” he tells Colossal.

The designer was recently interviewed by Wired, which travels with him from his studio to the forests of Long Island where he gathers materials. Currently, he’s working on a few projects, including an elaborate kitchen garden, a children’s tree platform, and smaller sculptures, which you can follow on his site and Instagram. 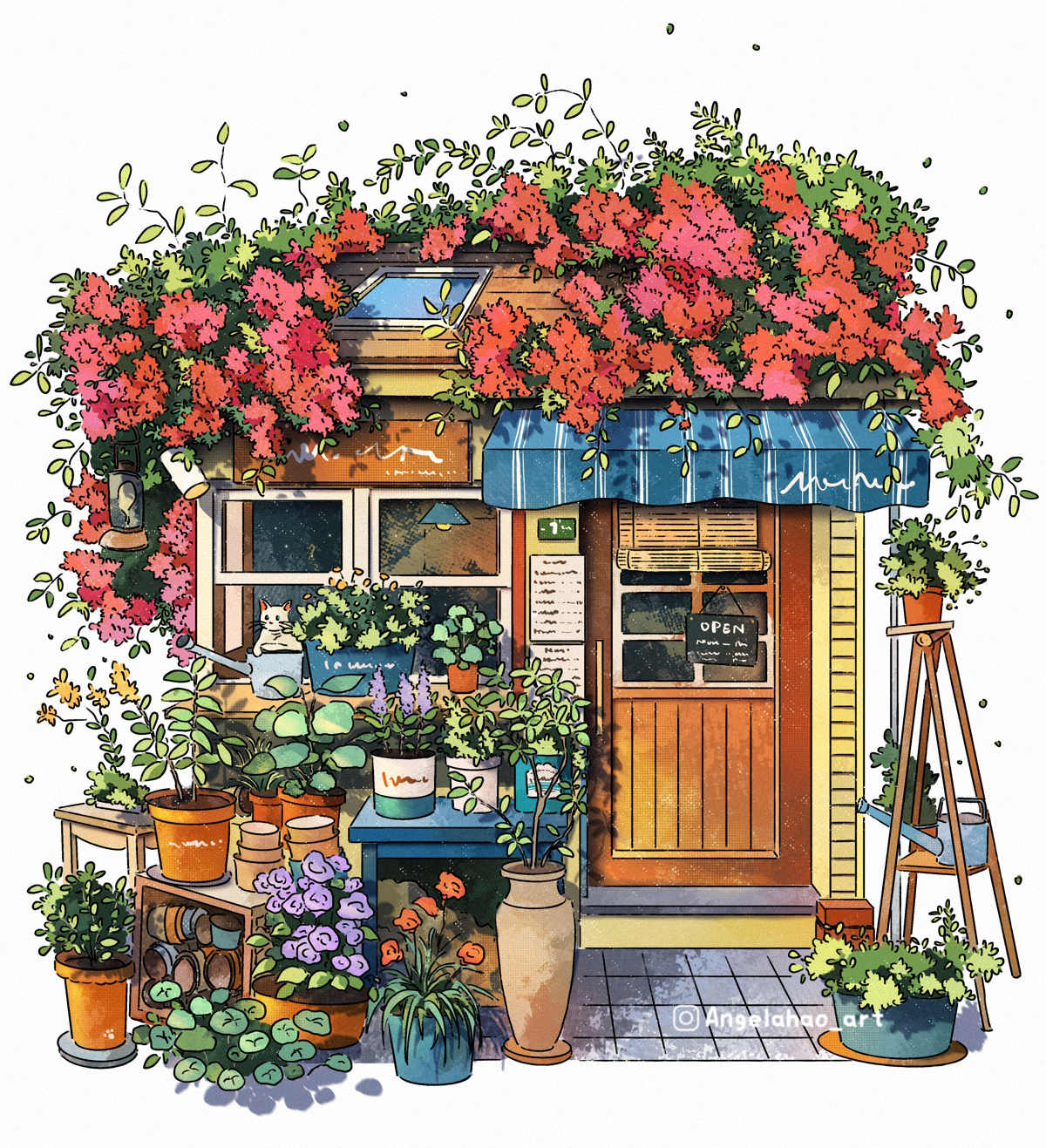 Whether adorned with used books, houseplants, or groceries, the tiny shops and corner stores that illustrator Anglea Hao draws are infused with whimsy and admiration for everyday architecture. The digital renderings are part of Hao’s ongoing endeavor to create 365 unique storefronts—she’s already posted hundreds on Instagram that have grown in complexity and depth—and the subject matter is primarily imagined spaces, although some of the earliest works are based on real spots. Prints of the buildings, which frequently feature vine-laden rooftops, pasted advertisements, and a recurring white cat, are available in her shop. 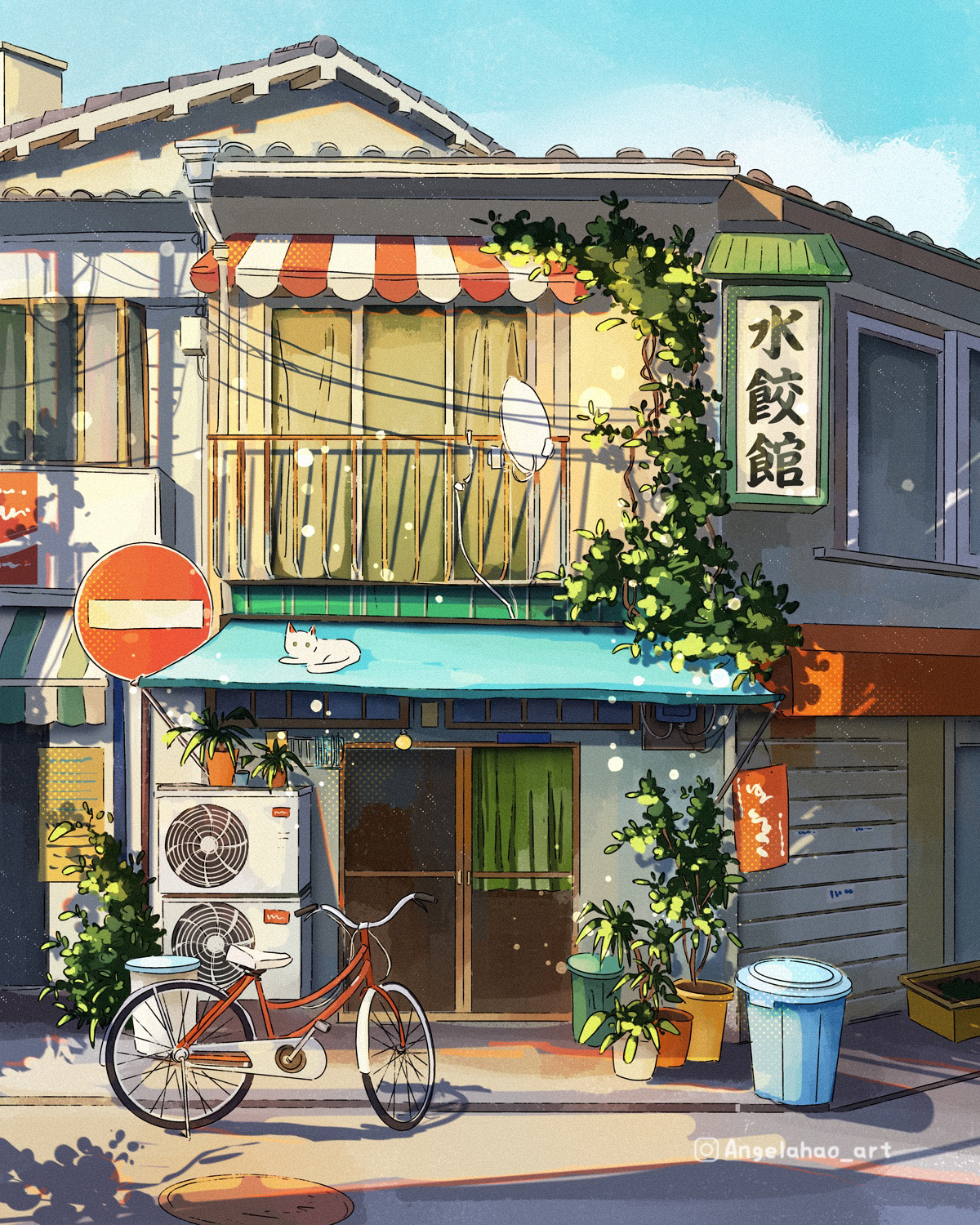