Nearly a decade before masks became a ubiquitous part of our lives, artist Volker Hermes was fashioning lavish face coverings made of flowers, lace, and ornate baubles. In his ongoing series, Hidden Portraits, Hermes digs into the art historical archive and selects classical paintings that he then reinterprets. Elaborate accessories derived from elements in the original works become tools for obscuring the subjects’ faces, which subsequently draws attention to their garments, gestures, and surroundings.

Since he began the prescient series, Hermes has based his practice in painting even though he realizes each portrait digitally. Time has given him ample opportunities to delve into the original painters’ backgrounds, periods, and the symbolism of various fashions, an experience bolstered by his costuming work for opera productions.

Now fluent in historical significance, Hermes continues to parse questions of representation in the works and their current-day implications. “Each era has its own symbols,” he says. “I always like to mention the Chanel costume as a metaphor for today’s upper-class affiliation. There are of course more current, more specific ones, but this garment has something of a general visualization of an established elite.”

Other emblems—like the big, black hats made from beaver fur that many men don in works from the Dutch Golden Age to signify their rank—are more difficult to recognize today. Hermes says:

Whoever had such a hat, had himself painted with it. But today we don’t know that anymore. We simply see men with black hats, which no longer trigger anything in us. We look the sitters in the face as our natural approach. If I now exaggerate such a hat in my interventions, blocking the access via the face, the focus changes, the viewer is forced, so to speak, to look at the painting under new aspects, taking into account the meanings that determined the painting at that time.

From his studio in Düsseldorf, Hermes is preparing new pieces for a group show centered around a theme of clerical representation and pilgrimage, which you can keep up with on Instagram. Clusters of wooden spheres bubble up the fingertips and bodies of the children in Willy Verginer’s poetic sculptures. The Italian artist (previously) contrasts realistic carvings of adolescent figures with elements of whimsy and imagination. Alongside the forms that evoke childhood games are thick stripes of monochromatic paint, which wrap around the sculptures and bisect them in unusual places.

Whether a pastel, neutral tone, or black, the color is symbolic and used to convey subtle messages. Verginer’s works often stem from what he sees as the absurdity of ecological issues or larger societal problems, like the U.S. banking collapse. “My largest effort and research focus on not tying myself to the naturalistic representation of figures, but on giving something more through a dreamlike study, or better an absurd one, and not an imaginary one,” he says. “This world and the whole connected system were so absurd that they made me reproduce an equally absurd situation.” Many of the sculptures shown here are part of Verginer’s most recent series, Rayuela, which is the Spanish term for hopscotch and the title of Julio Cortázar’s counter-novel that can be read from front to back or vice versa. Written in a stream-of-consciousness style, the book produces varying endings and meanings depending on the reader’s sequence. Cortázar’s adventurous format combined with the imaginative nature of the game informed Vreginer’s approach to the series, which the artist explains:

(In rayuela), kids outline an ideal map on the ground, which starts from the earth and reaches the sky, through intermediate stages marked with numbered squares, on which they jump according to where a pebble is thrown. I can see a metaphor of life in this game; our existence is full of these jumps and obstacles. Each of us aims to reach a sort of sky.

In June, Toronto’s Gallery LeRoyer will have an exhibition of Verginer’s precisely carved works, and the artist has another slated for September at the Zemack Contemporary Art in Tel Aviv. Until then, find more of his sculptures on Instagram. The Wound: JR's New Anamorphic Artwork Appears to Carve Out the Facade of Florence's Palazzo Strozzi 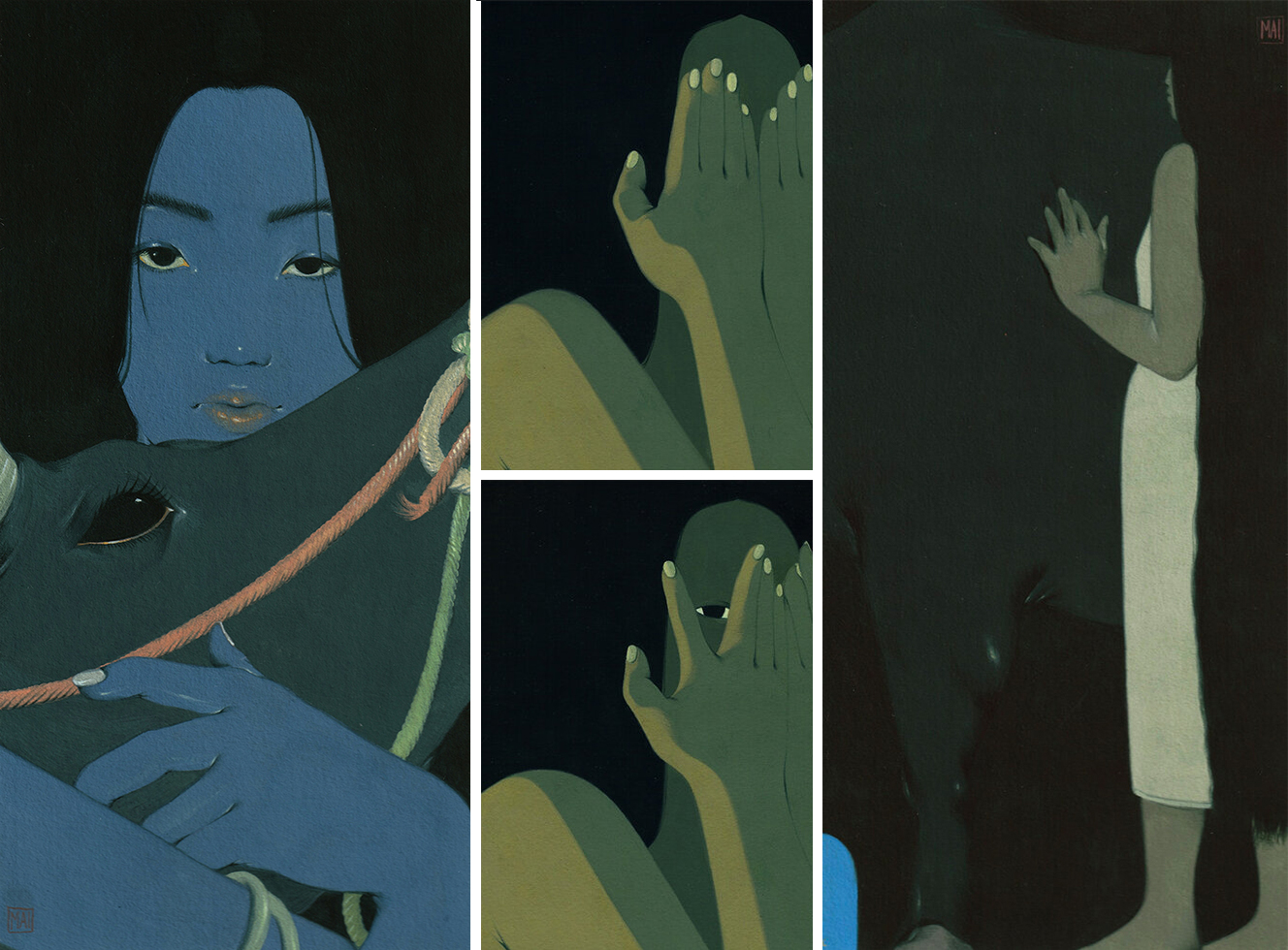 Saigon-based artist Mai Ta veils the subjects of her nuanced paintings with leaves, long locks of hair, splayed hands, and dim lighting. Utilizing muted tones and saturation, she works primarily in gouache to render lone women in domestic settings, creating introspective scenes that question what’s visible.  “Obscurity in my work represents my own inability to be confident about who I am,” the artist tells Colossal. “It’s easier to hide behind my hair (shadows, plants, anything) than to honestly express how I really feel.”

Many of the pieces stem from Ta’s background, although she strives to connect her experiences and the viewers’. I Set the Moon on Fire Because She Wouldn’t Wake Up, a series comprised of many of the paintings shown here, was transformative in helping her realize that “exploring my own personal narrative and emotions can be both therapeutic and visually exciting,” she says. “I made work about how my friends’ and (my) rooftop moon-watching sessions moved me. I made work about my own heartbreak. I made work about missing and loving Vietnam.”

Explore a larger collection of Ta’s paintings that examine the relationship between interior emotions and outward expressions on her site and Instagram. (via Juxtapoz) 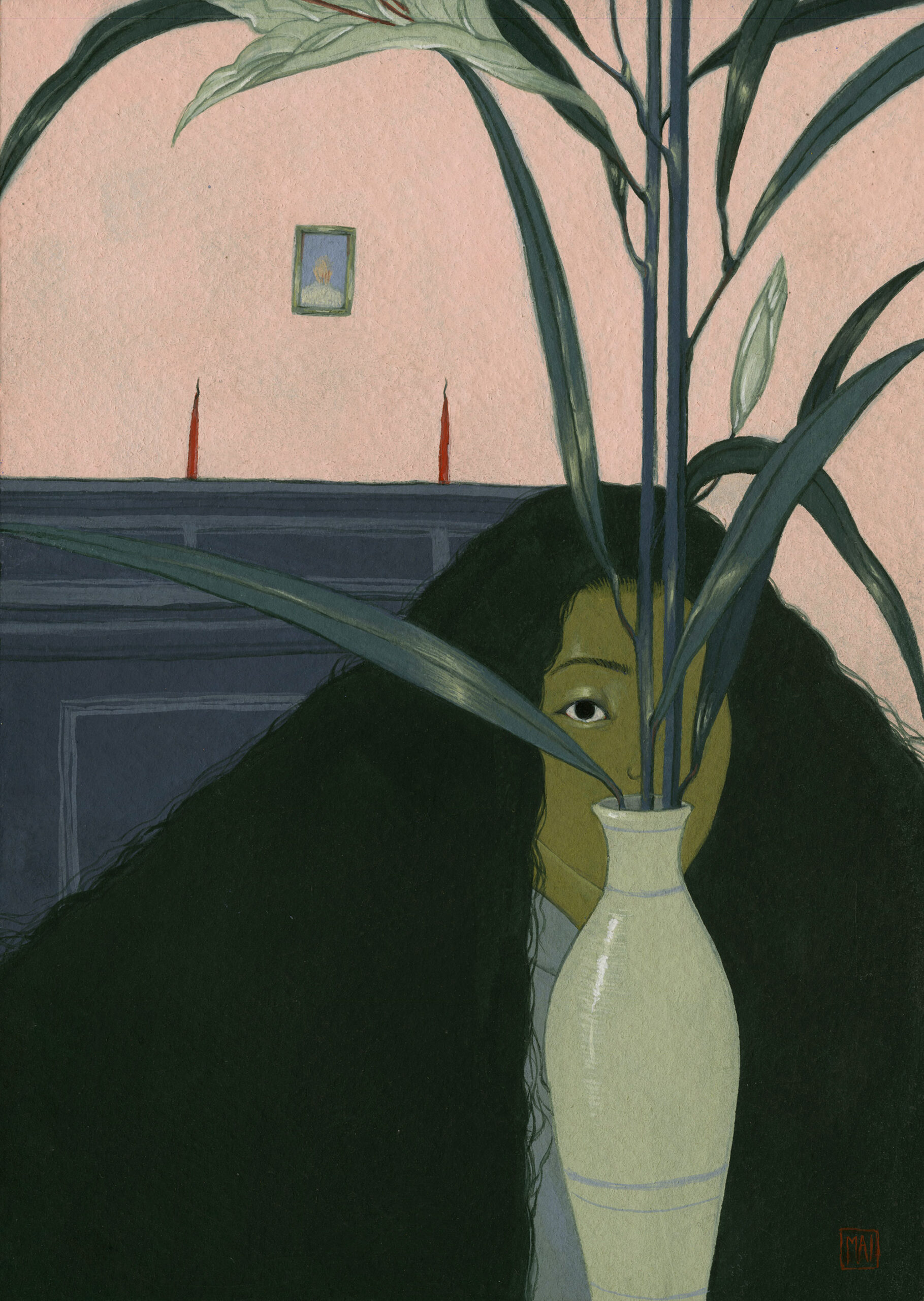 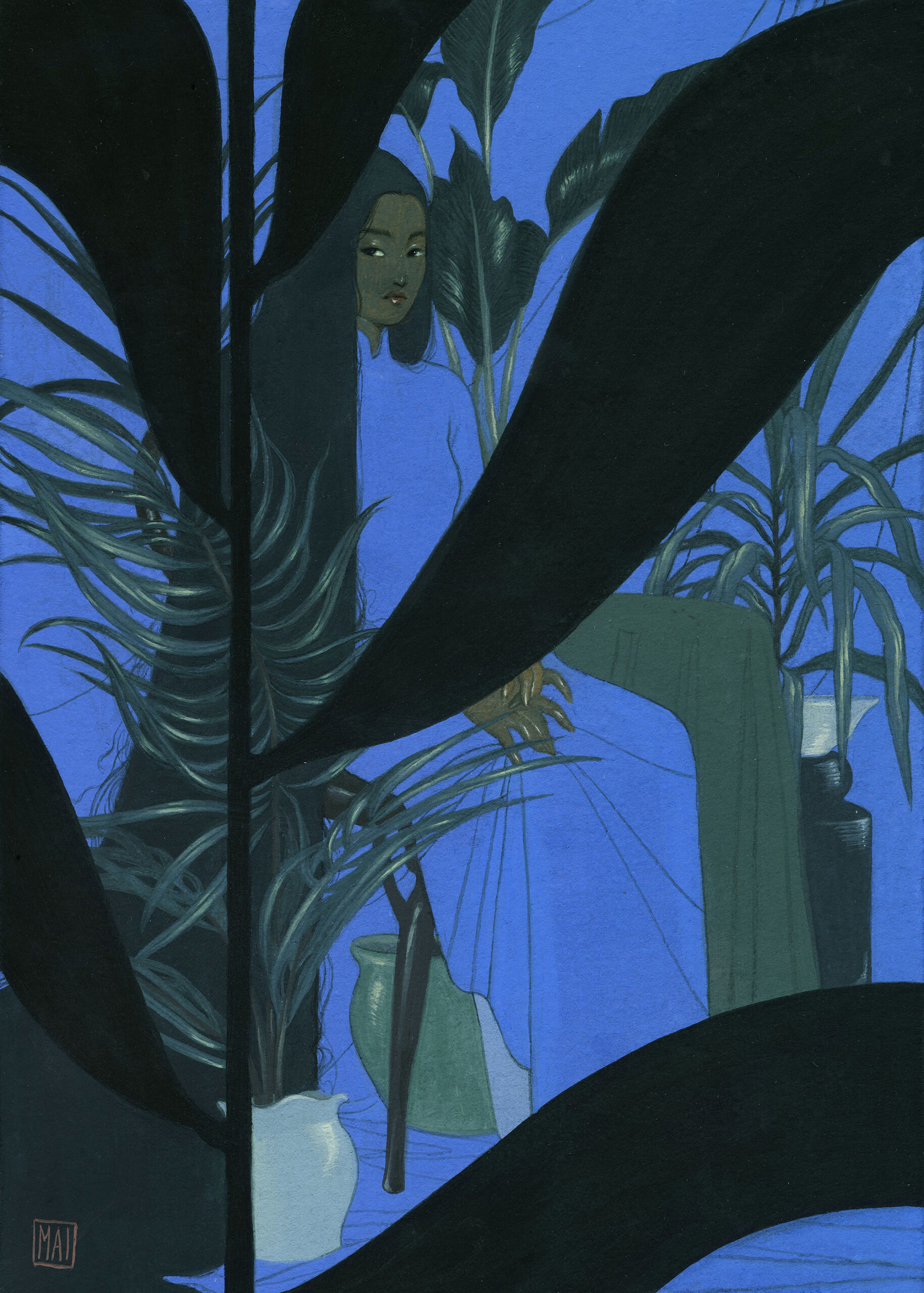 From hunks of beechwood or maple, artist Ariele Alasko carves sculptural works that take the shape of smooth curves, ruffles, and squiggled lines. The elegant pieces play with contrast and negative space and are assembled into abstract compositions, whether as a smaller wall object or expansive mobile-style suspension. In a note to Colossal, Alasko shares that she strives to sustainably source all of her materials, whether from local lumber yards or her own property in Washington State. The artist holds a BFA in sculpture from Pratt Institute, and you can follow her carvings on Instagram. 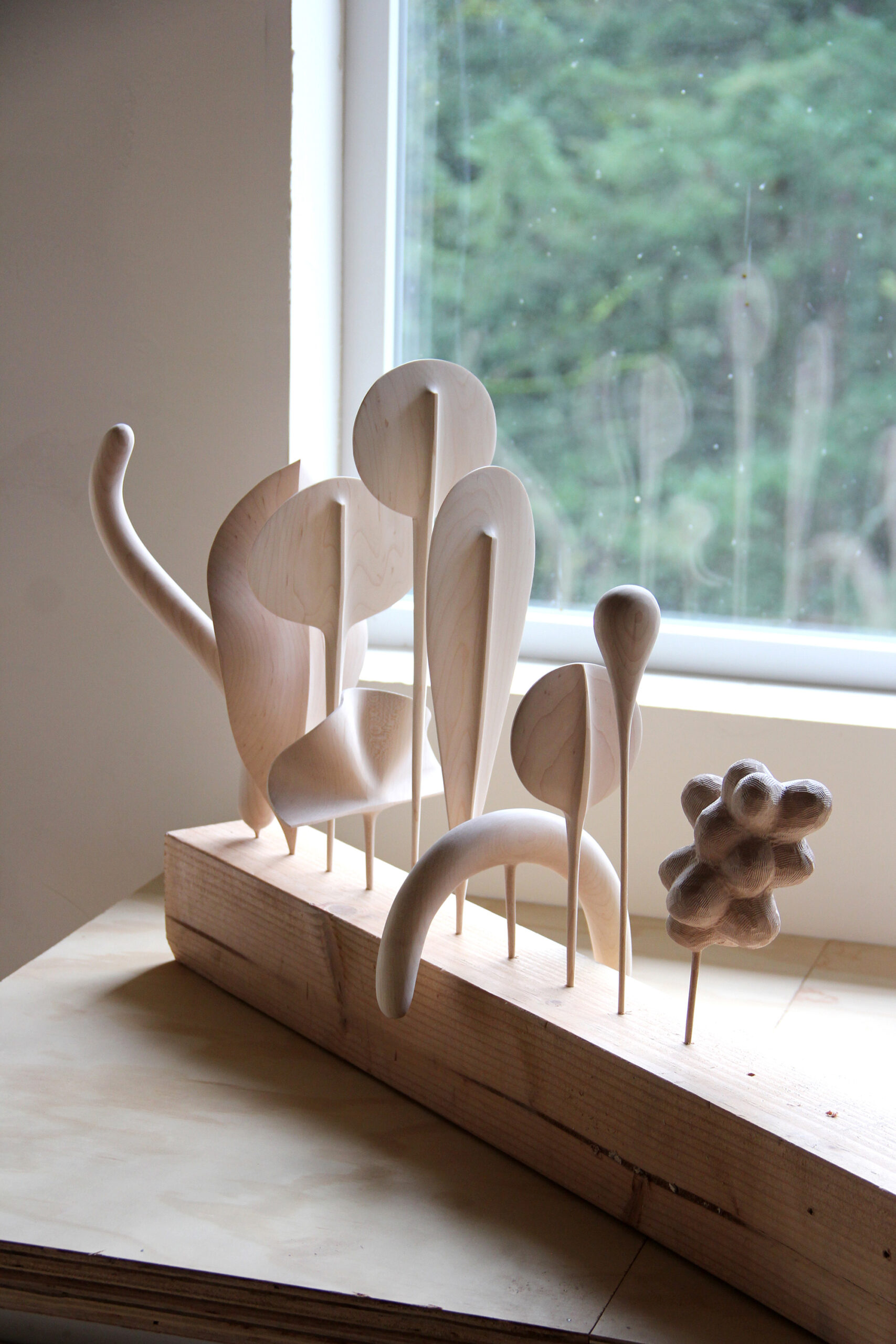