‘Girl with a Pierced Eardrum’ by Banksy …Banksy just published photos of a new piece titled Girl with a Pierced Eardrum, a take on Vermeer’s famous Girl with a Pearl Earring, replacing the girl’s earring with an outdoor security alarm. The mural appears in his hometown of Bristol, UK where he last painted the Mobile Lovers piece earlier this year…. Re-Photo by Jaime Rojo for Brooklyn Street Art If you enjoyed Banksy’s wild romp through the streets of New York last year as part of his ‘Better Out than In’ residency, the entire 31 days is now meticulously documented in this new book from photographer Ray Mock. Available now from Carnage, Banksy in New York features over 120 photographs and illustrations organized day by day during the course of the artist’s New York escapade. Only 2,000 copie… After a brief hiatus from his whirlwind New York residency last October, Banksy emerged with at least two new pieces over the weekend. The first depicts a trio of shady government officials crowding around a phone booth using analog recording devices to eavesdrop on conversations. That piece popped up in Cheltenham, a borough of Gloucestershire, England which is not coincidentally home of the Government Communications Headquarters (GCHQ). The se… 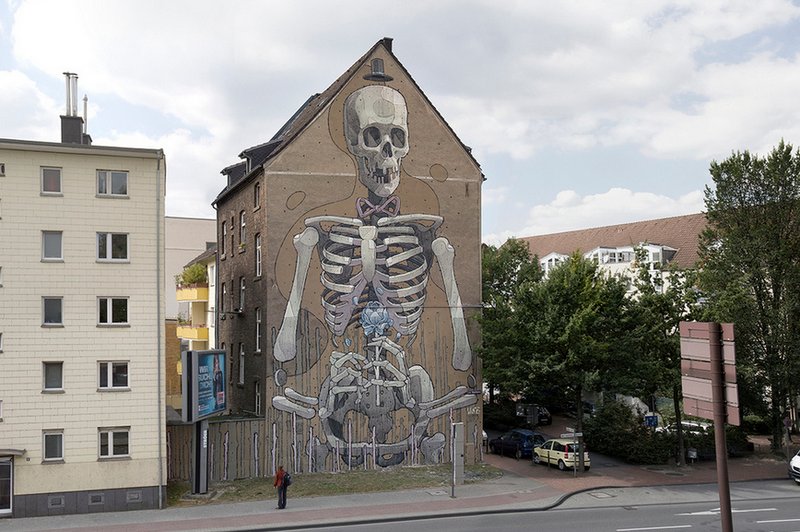 …as risen to be amongst the top ranks of world-renowned street artists like Banksy and ROA. Aryz was born in Palo Alto but moved back to Spain when he was just three. He began painting (in the form of graffiti) as a teenager, and his style evolved – in part, from his art studies in college – to what it is today. Bones are a recurring motif in the artist’s work, and so are skin-like muted colors. “I feel it’s really aggressive when you paint in a pu… …Banksy paid a visit to the Upper West Side for the 20th day in his Better Out than In residency in New York. The plain black stencil depicts a small boy holding a giant hammer, effectively turning an outdoor fire alarm into an impromptu high striker game…. …hicago just won the lottery and unknowingly walked away with four original Banksys. But don’t get your hopes up, according to the artist’s website this was a one day affair. “This was a one off. The stall will not be there again today.” Watch the video to see it all unfold. For those of you following along the past few weeks via Instagram, Banksy’s website (or perhaps following his tracks around New York), the artist has been creating a new artwor…

Better Out Than In: Banksy to Descend on NYC for an Outdoor “Residency” in October …tirical message that completely skewers typical audio tours found in museums and galleries and pokes fun of the artist as well, referring to him repeatedly as “Ban Sky”. Do you think he’ll make a new piece every day? That seems pretty grueling. Stay tuned to www.banksyny.com to find out. Nearly 14 months have passed since Banksy’s last (known) foray outdoors prior to the 2012 Olympics in London. Update: It appears Banksy is posting photos of new w…