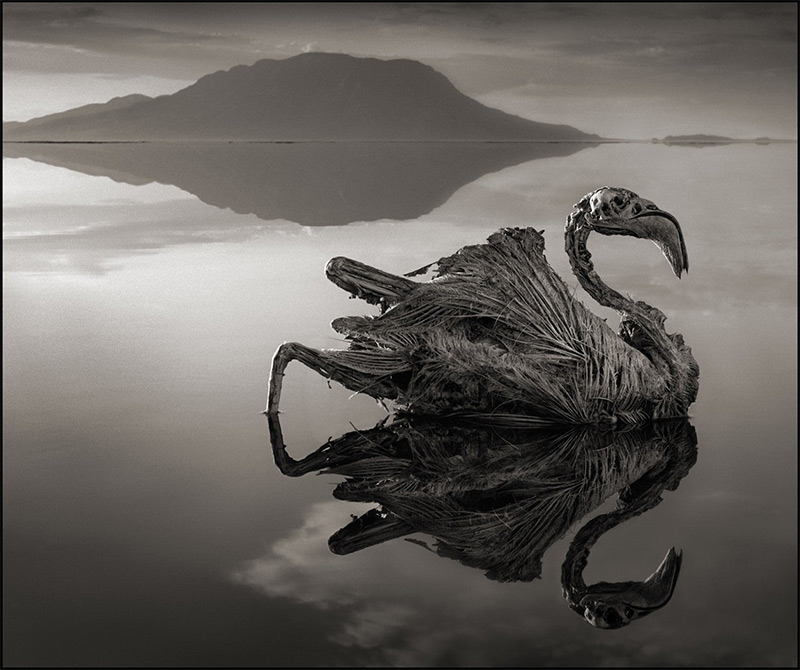 Lake Natron in northern Tanzania is one of the harshest environments on Earth. Temperatures in the lake can rise to 140 °F (60 °C) and the alkalinity is between pH 9 and pH 10.5, almost as alkaline as ammonia. Animals who enter the water are almost certainly doomed, save certain kinds of fish that have evolved to survive in such a caustic environment.

While working Africa photographer Nick Brandt stopped by the lake to discover several dead animals on the shoreline. Birds and other small mammals that end up in the water gradually become calcified, turned to stone in the deadly water. Brandt tells NewScientist, “I could not help but photograph them. No one knows for certain exactly how they die, but it appears that the extreme reflective nature of the lake’s surface confuses them, and like birds crashing into plate glass windows, they crash into the lake.” These photos and many more are included in Brandt’s new book, Across the Ravaged Land, a third and final volume of photography documenting the disappearance of animals in Eastern Africa. All photos copyright Nick Brandt, courtesy of Hasted Kraeutler Gallery. (via My Modern Met)