Packed within a 6,000-square-foot space on Chicago’s south side is a fictional universe teeming with pinned up newspaper clippings, towers of retro electronics, and tons of vintage advertising from McDonald’s to Vienna Hot Dogs. It’s the world of Hebru Brantley’s iconic characters, Lil Mama and Flyboy, whose enlarged head rests on the floor in one room of the immersive installation, titled Nevermore Park. Moving through the pathways lined with plastic toys and paint-spattered pallets, visitors pass a downed spaceship and a brick wall of street art, elements that structure Brantley’s narrative for the surreal environment.

The Los Angeles-based artist cites the tales of the superheroes and comic books he engaged with during his childhood living in Chicago as directly impacting his current projects. “I’m in love with creating and I have so many stories I want to tell,” he tells Colossal. “I want my work to create a narrative that hasn’t been told before, in ways others haven’t seen expressed. I’m working to create the things I wished existed.”

Although Brantley created many of the objects specifically for Nevermore Park, he also amassed thousands of pieces of real ephemera that create a strong undercurrent of Chicago’s history as expressed through pop culture, toys, magazines, and found objects. The periodicals lining the newsstand, for example, belonged to his grandmother. “She had saved a number of them and it created a unique opportunity for me to incorporate these real historical artifacts into my body of work for visitors to experience. Everything weaves together with the goal of staying authentic to the stories I wanted to tell,” he says.

Nevermore Park, though, is intended “to be a total sensory experience,” inspiring Brantley to collaborate with WILLS on the audio component, offering a soundtrack that he says visitors always ask about. “Bringing people into a space they wouldn’t normally occupy with sounds that are familiar, amplify the story and culture even more,” he writes. “Sight is an important aspect of the experience but so is the sound piped into each section.”

If you’re in Chicago, there are tickets available to visit Nevermore Park through May 3. Otherwise, head to Instagram to keep up with Brantley and see what’s next for Flyboy, Lil Mama, and Nevermore Park. Artist and musician Steve Parker’s latest interactive projects invite viewers to feel the music⁠—literally. Activated by touch, “Ghost Box” plays randomized audio segments on a loop, including the ticks of Morse Code, the chorus of spirituals, and the blows of the shofar and Iron Age Celtic carnyx. Each time someone makes contact with a part of the wall sculpture, a new noise emits. Inspired by WWII era short wave radio, the mounted piece is constructed from a mix of salvaged brass, tactical maps, paper musical scores, wires, map pins, electronics, audio components, and an instrument case. The name even references the paranormal tool sometimes employed when people try to communicate with those who have died.

In line with “Ghost Box,” Parker created “Ghost Scores,” which is an ink on paper, pins, and electrical wire combination that mimics a music staff and markings, or visual language. In a statement about the project, the artist links the audio-visual work more explicitly to its history.

The Ghost Army was an Allied Army tactical deception unit during World War II. Their mission was to impersonate other Allied Army units to deceive the enemy. From a few weeks before D-Day, when they landed in France, until the end of the war, they put on a “traveling road show” utilizing inflatable tanks, sound trucks, fake radio transmissions, scripts, and sound projections.

“ASMR Étude #1” depends on the viewer having an auto sensory meridian response, a phenomenon during which a tone causes a tingling sensation in the listener’s body. Using a pair of headphones with two brass bells attached to each side, the wearer moves near small speakers mounted on a wall, generating the sounds, and hopefully, the prickly feeling.

A group of Parker’s projects are on view at CUE Art Foundation in New York City through February 12, and you stay up to date with his work on Twitter. (via Design Milk) 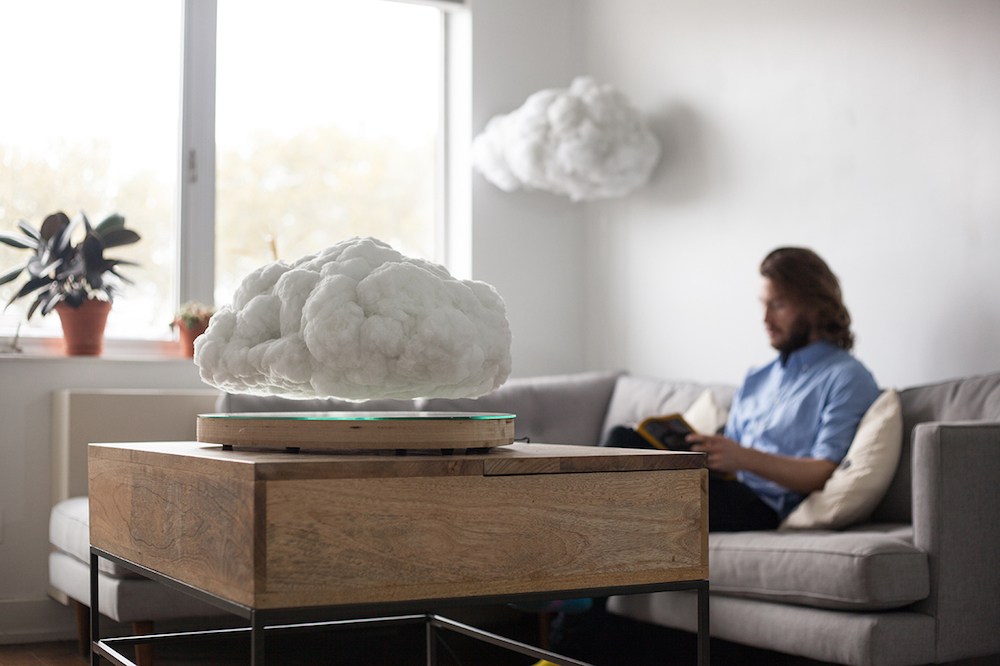 Richard Clarkson Studio (previously) has teamed up with Crealev (previously) to produce a miniature floating cloud, one that hovers indoors while both playing your favorite music and lighting up in tune to the beat to replicate a storm. The design, called Making Weather, is formed from polyester fibers which hide a Bluetooth speaker, LED lights, and a magnet. This magnet allows the form to float above the piece’s mirrored base in opposite polarity with another magnet, seeming to organically hover and sway to the music that is pumped through it.

Currently in prototype form, the indoor cloud will be hopefully become available for living room use in the near future. (via My Modern Met) The Essence of Sound: Lycopodium Powder on a Subwoofer

In her second experimental clip exploring the effect of sound waves on lycopodium powder, filmmaker Susie Sie just released this new promotional video for high-end audio system manufacturer Burkhardtsmaier. The super fine (and super flammable) powder made of clubmoss spores creates fascinating patterns and forms as it vibrates due to a subwoofer positioned just below the surface. If you liked this you’ll also like her previous short Cymatics.

Directed and produced by Susie Sie in conjunction with CypherAudio, this short clip titled Cymatics shows what happens when when lycopodium powder (a highly flammable substance composed of clubmoss spores) sits on top of a vibrating stereo speaker. Shot at various angles with a 100mm macro lens it’s easy to mistake the footage for something digital, something the artist has explored previously with other materials in her videos Silk and Emergence. Recommend full-screen for this one.