Artist Juan Fontanive (previously) constructs perpetually looping flip book machines that depict flying birds lifted from Audubon guides and illustrations of butterflies. Part film and part sculpture, almost every aspect of the flip books are assembled by hand from the minutely toothed gears, clips, nuts, bolts, worm wheels and sprockets to the carefully screen printed imagery. Of the curious devices Gild Williams remarked, “Fontanive’s artworks seem strangely possessed, producing curiously moving animals that are neither living nor dead, or creating ghostly systems which seem to float mid-air and follow a pace and logic of their own.” You can see much more of his work over at Riflemaker.

Lost & Found: Inside the Bizarre Wonderland of Artist and Tinkerer Blair Somerville For the last decade, self-confessed tinkerer and “organic mechanic” Blair Somerville has owned and operated the Lost Gypsy Gallery, a sprawling menagerie of kinetic sculptures, automata, and electronic doohickies. Located in in a remote corner of New Zealand’s South Island, the gallery has become Somerville’s life work, a testament to artistic ingenuity, and an offbeat tourist attraction where visitors can experience first-hand his interactive “Fine Acts of Junk”.

Filmmaker Joey Bania takes us inside this enchanting yet totally bizarre wonderland in his new documentary short Lost & Found, funded in part by BBC Worldwide Young Producers’ grant. NSFW-ish language here and there.

If you liked this, you might also want to take a step inside the UFO Welcome Center or learn more about the Junk King. 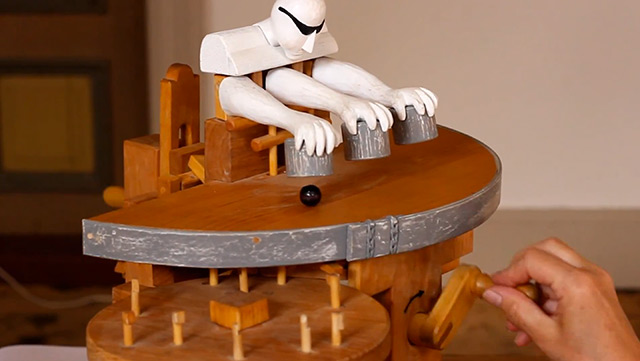 Designed by Swedish artist Per Helldorff, this amazing little wooden automata performs magic with three cups and a ball that seems to teleport before your very eyes with the wind of simple crank. I guess it’s somewhat obvious a few cleverly placed magnets are causing everything to happen, but that doesn’t make it any less fun to watch. (via colossal submissions)