A Suspended Boat of 8,000 Sheets of Rice Paper Draped on Bamboo by Zhu Jinshi Constructed from 8,000 sheets of rice paper, 800 bamboo shafts, and suspended by untold lengths of cotton thread, this beautiful installation by Chinese abstract artist Zhu Jinshi was recently on display at ART13 London. Titled Boat, the piece is meant as a sort of metaphor regarding the artist’s journey from east to west, while simultaneously honoring the dead’s passage from living into the afterlife. You can read more about its significance over at this website by Pearl Lam Galleries. (via collabcubed)

Voyage: A Fleet of 300 Illuminated Boats in Canary Wharf by Aether & Hemera 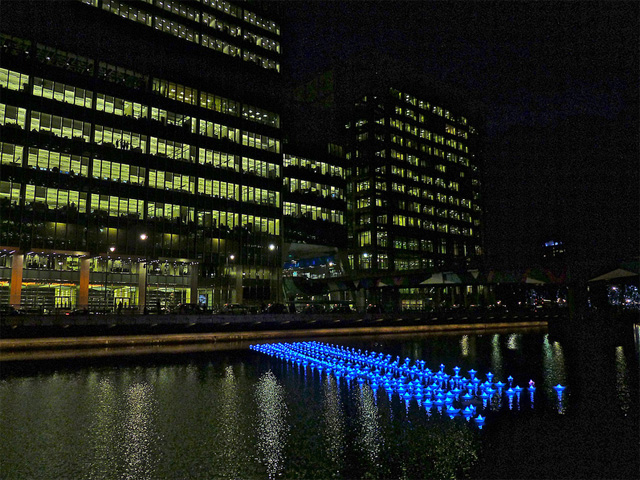 Media architect Claudio Benghi and light artist Gloria Ronchi joined together in 2006 to form Aether & Hemera, an interdisciplinary collaboration that seeks “to research the aesthetic challenges of light and its power to trigger emotions and response, creating a sense of identity or setting a mood.” Their latest installation in London’s Canary Wharf is this beautiful fleet of 300 illuminated boats called Voyage. Each floating light is reminiscent of a paper-folded origami boat that is illuminated from within, and I’m told there is a wireless network in the vicinity that allows you to join with your mobile device and somehow alter the color of the entire installation.

Voyage will be up through February 15th, 2013, and while the lights are on during the day, the viewing is probably best at night. I want to thank photographers Sean Batten and Ian Docwra for providing the images for this post.

I love the subtle effect of this installation by Patrick Bérubé. At a distance it looks simply like a white toy container ship resting on the gallery floor. On closer inspection you realize the entire gallery floor has been modified, the gaps between the wooden floorboards mimicking the ocean wake behind the lumbering toy vessel. The piece is part of the Fenêtre sur cour exposition at Gallerie SAS in Montréal that runs through January 12.

A Sterographic Projection Made with Individual Photos

I love a good stereographic projection but they seem to be everywhere these days so it’s hard to find somebody doing something truly unique with the method. Buenos Aires-based art student Adrian Felipe Pera managed to do it though with this wonderful boat capture. Instead of skewing the image digitally he used some 40+ large photographs placed in the sand on a beach to create a projection of an old wooden boat. See some more of his planeticas. (via the colossal flickr pool)

Chicago by boat: A timelapse journey

A gorgeous timelapse of a day long trip on Lake Michigan and through the Chicago canal system by director Philip Bloom. Music by Nine Inch Nails, 14 Ghosts II.

Armada is the latest exhibition by Jacob Hashimoto currently at Studio La Città in Verona. Hashimoto frequently uses acrylic, paper, bamboo, and nylon to create densely layered installations of translucent discs and other geometric shapes that are mounted on walls. Some of his much larger works fill entire gallery rooms or ceiling spaces. Unique to this exhibition he installed a large-scale kinetic sculpture of suspended sailboats affixed to three gently rolling lever mechanisms that cause the ships to roll gently along invisible waves. I hope dearly somebody shoots a video of this in action. (via wowgreat)