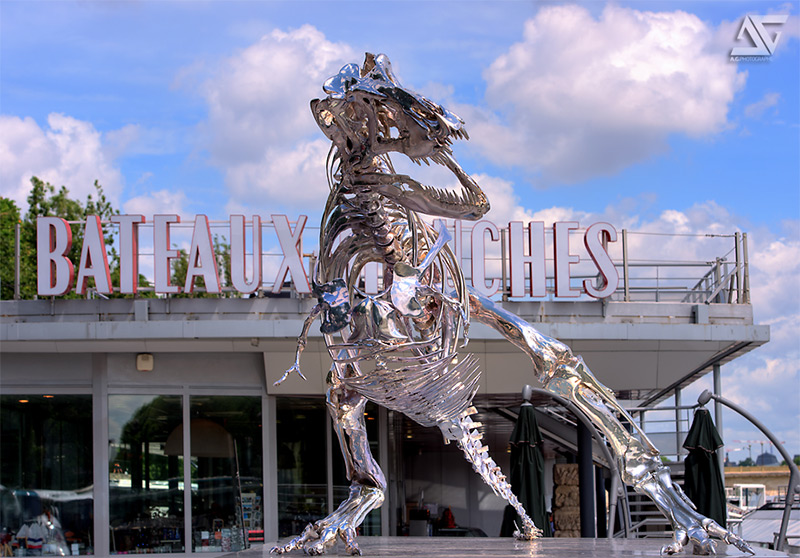 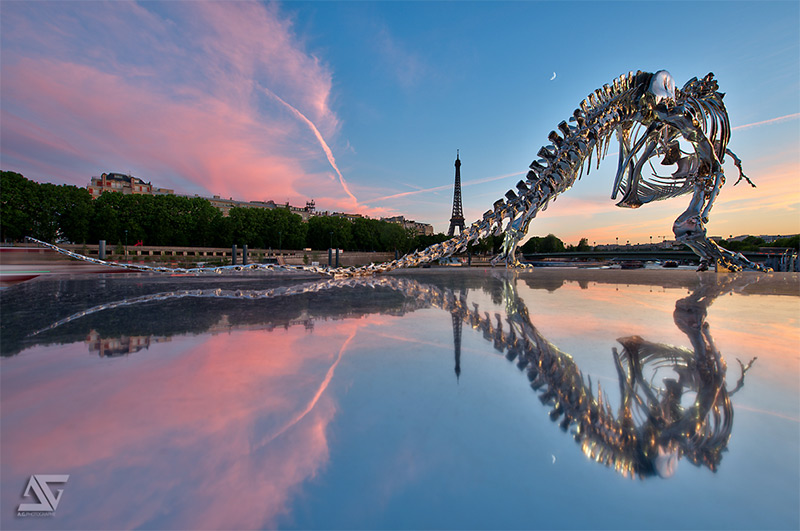 Artist Philippe Pasqua recently completed installation of an impressive Tyrannosaurus Rex skeleton that now stands watch over the Seine river in Paris. The structure is made from 350 chrome molded bones and measures a full 21′ x 12′ (3m by 6m). Photographs above courtesy Anthony Gelot. If you liked this, also check out Huang Yong Ping’s stainless steel snake skeleton, Ressort. Currently on view at the Queensland Art Gallery is Ressort, a 174-foot (53 meter) aluminum and stainless steel snake skeleton by French/Chinese contemporary artist Huang Yong Ping. The twisting metal sculpture was commissioned for the Asia Pacific Triennial of Contemporary Art at QAGOMA which is the only major exhibition that focuses exclusively on contemporary art from Asia, the Pacific and Australia. The snake plays a prominent role in much of Ping’s artwork, as the symbol of the serpent is generally considered a good omen in Chinese culture. You can see much more of the artist’s work over at Kamel Mennour gallery. (via my modern met)

The founder of design firm Thirst/Chicago, Rick Valicenti recently art directed this incredible book using the photography of Francois Robert from his series Stop the Violence. Each spread features an individual letter from the alphabet—compositions made of human bones arranged by Robert—in juxtaposition with a page from President Barack Obama’s Nobel Peace Prize Acceptance Speech from 2009. I just got my copy in the mail and the book is truly stunning. It’s 36 pages and over a foot tall. How much would you be willing to pay for such a killer publication? It’s free. Whoops, looks like you folks snapped up the last few copies. Published by Classic Color.

Photos by Marc Da Cunha Lopes based in Paris. (via 500 photographers)