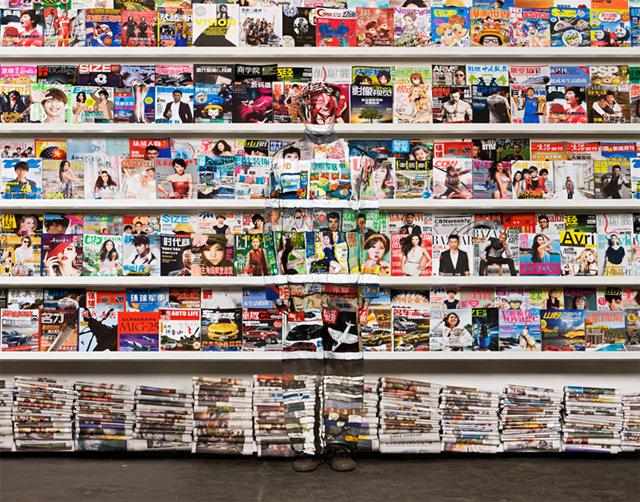 Artist and camouflage extraordinaire Liu Bolin just opened a new exhibition at Galerie Paris-Beijing in Paris featuring a number of new works that depict the artist perfectly hidden amongst urban backdrops. Remarkably the effect is achieved without the use of special effects or Photoshop, rather Bolin is painstakingly painted head-to-toe by a group of assistants using photographs of the area behind him as a guide. “My intention was not to disappear in the environment but instead to let the environment take possession of me”, he says. Bolin’s intent is not to simply hide himself as an individual but suggests the works are statement regarding damage caused by economic and urban development. The show runs through March 10th. (via designboom)

I’ve been meaning to post this for a while ever since seeing it on Graphic Hug a while back but it kinda fell off the radar. Dazzle camouflage was a technique used during both WWI and WWII to obscure aspects war ships.

At first glance Dazzle seems unlikely camouflage, drawing attention to the ship rather than hiding it, but this technique was developed after the Allied Navies were unable to develop effective means to disguise ships in all weather.

Dazzle did not conceal the ship but made it difficult for the enemy to estimate its type, size, speed and heading. The idea was to disrupt the visual rangefinders used for naval artillery. Its purpose was confusion rather than concealment. An observer would find it difficult to know exactly whether the stern or the bow is in view; and it would be equally difficult to estimate whether the observed vessel is moving towards or away from the observer’s position.

RISD also has a super cool online gallery on the topic. Great stuff. On a related note, and from a different war, see also Quaker Guns. (via graphic hug)