Material Properties: Celebrating the Art of Craftsmanship in a Group Exhibition at Paradigm Gallery + Studio Colossal is proud to announce Material Properties, a forthcoming group exhibition curated by our Founder and Editor-in-chief Christopher Jobson. The show, which opens on September 27 and runs through October 19, 2019, is at Paradigm Gallery + Studio in Philadelphia, PA. Material Properties examines the intertwined histories of fine art and craft through the work of six artists from around the world.

Please join us for an opening reception on September 27 from 5:30 to 10pm. Artist James McNabb and Christopher Jobson will be present at the opening and you can RSVP on Facebook. Colossal is thrilled to announce a joint fundraiser exhibition in New York with Sugarlift this July. Mother & Child Vol. II will raise funds for three non-profits helping with direct assistance and legal defense for families and children caught in the humanitarian crisis at the US/Mexico border. All proceeds from the sale of artworks donated by this outstanding group of contributing artists will be split between Kids in Need of Defense, The Young Center, and The Florence Project.

Please come join us on Monday, July 15th from 6-9pm (one night only) for drinks, light food, and a phenomenal collection of art at the 198 Allen Street pop-up space. If you can’t make it to New York, works will eventually be made available online, stay tuned. Mother & Child Vol. II is co-curated and produced by Sugarlift and Colossal.

We invite you to please RSVP and bring your friends, family, neighbors, and coworkers. Stay tuned for further updates on Instagram. Still from Other Side of the Woods by Anu-Laura Tuttelberg.

Colossal is hosting a short-film program this Saturday night in Chicago at Lost Arts as part of a new series called Track Shorts. Echoing Lost Arts’ role as a laboratory and workshop for creatives working with their hands, Colossal brings together a collection of stop-motion short films that celebrate the physical labor of bringing stories to life on screen. This Track Shorts event is an hour-long program featuring over a dozen films by animators from nine countries. The screening is outdoors on an old railway loading dock at Lost Arts.

Shorts by PES, Laura Stewart, Kirsten Lepore, Norman McLaren, Anu-Laura Tuttelberg, Timothy Reckart, Gemma Green-Hope, and many others. We have just a few seats left, tickets are only $5. 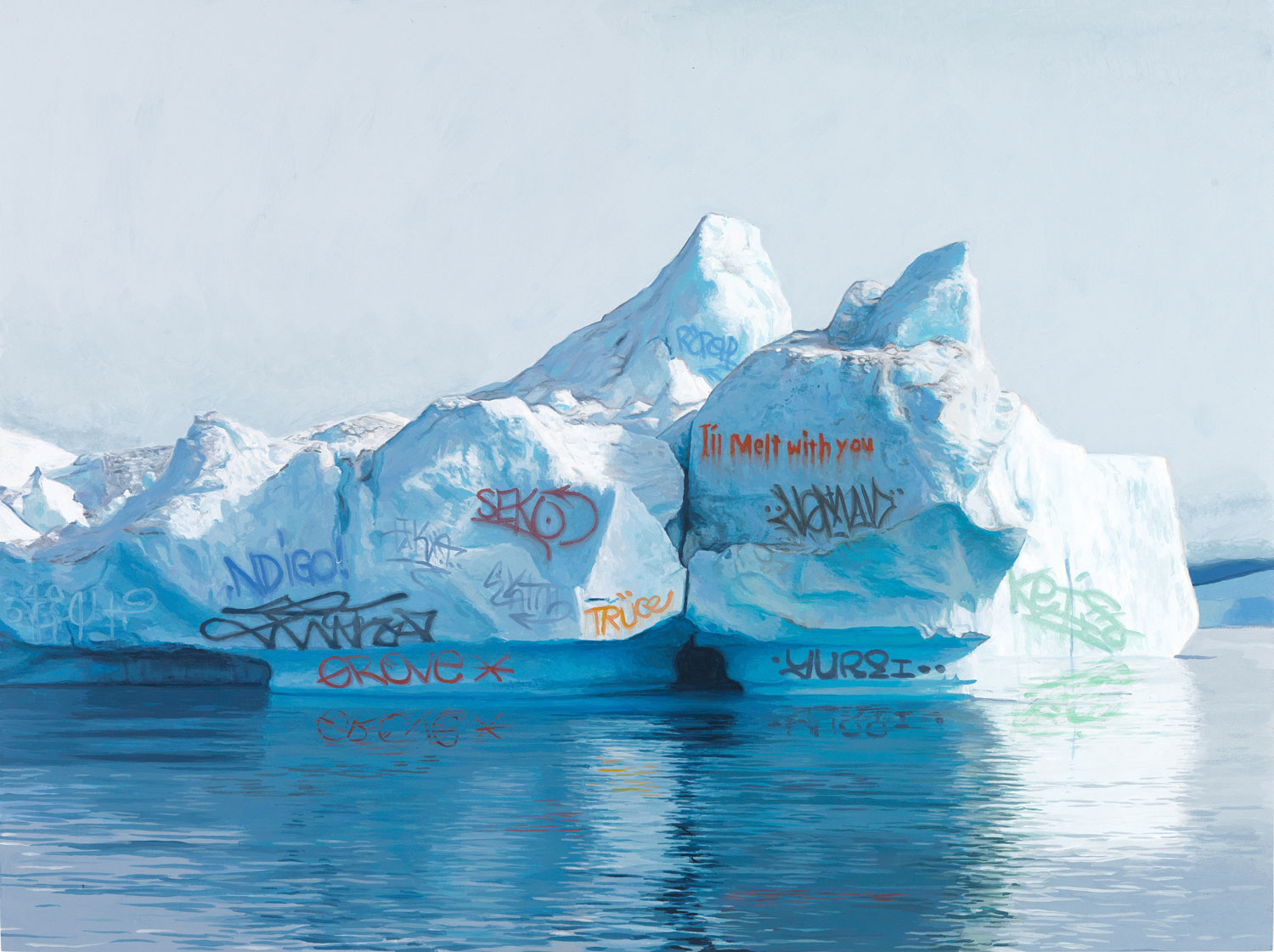 We are honored to have worked with Portland-based painter Josh Keyes on an exclusive release of the print edition of his 2016 painting, “I’ll Melt With You,” available now in The Colossal Shop.

Keyes’ ability to paint realistic renderings of our world becomes uncanny when he wields his brush in the name of environmental issues. Animals, rocket ships, and icebergs fall prey to graffiti, leaving the viewer uncomfortably wondering whether this is a painting of the future or a photograph of the present.

“I’ll Melt With You,” originally painted in acrylic on a 12 x 16 inch panel is translated to print form in its full dimensions, with an additional white border for convenient framing, for a final size of 16 x 20 inches. Printed by our friends at ioLabs in Rhode Island on Epson Hot Press Bright 300 gsm archival paper and available exclusively in The Colossal Shop. 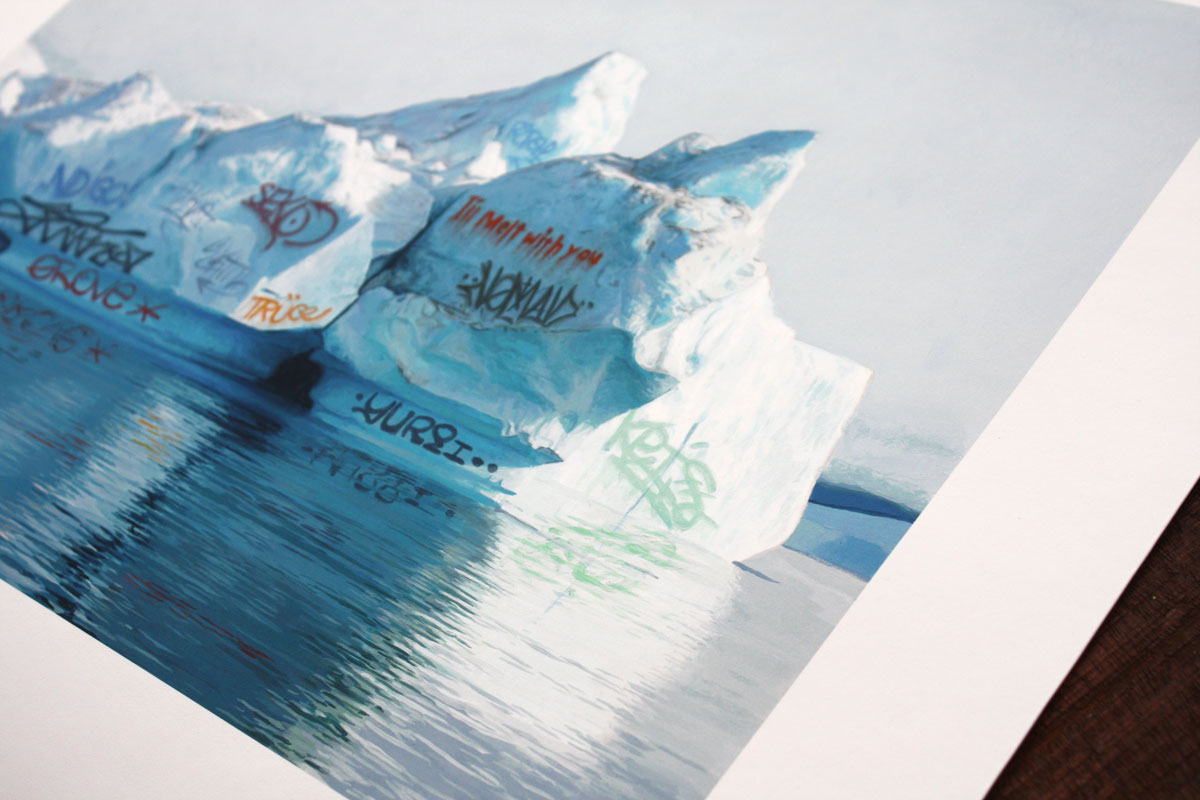 I had such an absurd amount of fun working with the Sketchbook Project to curate their first mobile sketchbook tour in 2012 that they asked if we might partner again for their hugely expanded 2014 tour that will stop at some 20+ cities in the U.S. and Canada. Colossal will be along for the ride as part of their Central Tour making stops in Brookyln, Chicago, Madison, and Minneapolis. If you’ve never participated or haven’t heard of the Sketchbook Project you can watch the video above to learn more about the world’s only mobile library of art sketchbooks from the Brooklyn Art Library based in Williamsburg, Brooklyn, NY that’s now home to 27,000 sketchbooks from around the world. Last year I had the honor of viewing some 3-4,000 books and I didn’t even get a paper cut, though my brain hemorrhaged several hundred times while I discovered incredible sketches, paintings, collages, poems and even paper sculptures.

So let’s make the Central Tour the BEST TOUR, signup for your blank sketchbook and have your work travel around the midwest—it might even show up right here on Colossal.

Today is an incredible day.

For the past two years Colossal has been written and published in coffee shops, at dining room tables, on couches, in restaurants or hotels, and once from a fishing boat in the Gulf of Alaska. I’ve written a handful of articles from the passenger seat of a car, one from a CTA train car, and few while in flight. Because of my full-time job, work on Colossal started hours before the sun rose, as I poured entire pots of coffee on myself with barely enough consciousness to muster the thought: LOOK AT THIS THING. For 30 months Colossal was never edited from a normal desk during “business” hours.

As of now, that changes. I’m stupidly excited to announce that Colossal has grown enough that it now supports my family. Today, for the first time, I begin editing full-time. This abundance of time will let me focus on regular daily updates as well as a clogged pipeline of new projects and collaborations that will roll out over the next few months. Thanks to everyone who has clicked, tweeted, bookmarked, emailed or otherwise shared links from this blog, it’s because of you this is all possible.

OF NOTE: One of the main reasons Colossal exists is through limited advertising in partnership with Nectar Ads, an ad network for the visual arts. If you’re at all interested in getting your company, gallery, or event in front of millions of artists, photographers, and designers, please get in touch.