Electric Objects: A Dedicated Computer for the Display of Digital Artwork Currently funding over on Kickstarter, the E01 is a computer designed specifically for the display of art. The device was created by New York-based Electronic Objects who aims to simplify the display of digital art with the help of a dedicated system. The E01 can be wall-mounted or used with a stand and is controlled completely with your phone so you can swap out art, videos, GIFs, and even code-based projects that are executed in real time.

While there are several online services involving the sale and/or display of digital artworks (Sedition comes to mind), Electronic Objects is one of the first to offer the complete package of a digital display, distribution system, and artwork itself, not to mention a developer SDK which opens the door for untold applications in the future. They’ve also announced content partnerships with the New York Public Library, Behance, Giphy, and the Museum of the Moving Image. Several of their demos include artwork by artists seen right here on Colossal including David Szakaly and Zach Dougherty. The E01 is $300 over on Kickstarter. (via Kottke) 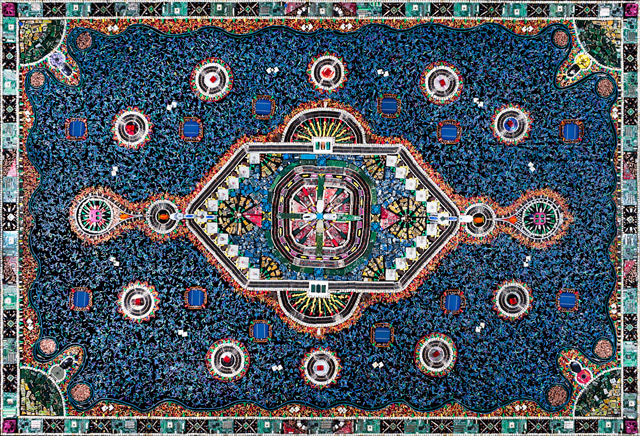 Although we just covered the work of Federico Uribe a few days ago in this space, the artist also shared with me this additional work which I thought warranted its own post. Titled Tapete (Carpet) the work is a large carpet made from thousands of perfectly placed computer components: fans, cables, keyboard keys, motherboards, mice, and other parts. I recommend not wiping your feet here. Photography by Pipe Yanguas.