Lisa Nilsson (previously) has spent years perfecting a technique known as quilling in which thin strips of paper are rolled into coils and then pinched and nudged into shape in a process she likens to completing a puzzle. With a history thought to extend back to Ancient Egypt, the practice rose to more recent popularity in 18th century Europe. Narrow edges of gilt book pages were a popular material, creating metallic surfaces when rolled into place. In her most recent work, “Grand Jardin,” Nilsson has expanded upon this traditional method by building up more dense applications of the medium and assembling on a much bigger scale. Combining shimmering gold pieces with vivid hues of Japanese mulberry paper across the surface, the ubiquitous material transforms into a remarkable topography.

Taking several years to complete, she paid painstaking attention to the complexities and details of the design, balancing intricate organic shapes with precise geometric patterns, all while preserving the composition’s overall symmetry. “The phases of my creative process—as it progressed from the initial spark of inspiration to settling in to work, to decision-making and problem solving, to finding flow, losing flow and finding it again, to commitment and renewal of commitment—were repeated many times over the six years and within the context of widely varying moods,” she tells Colossal.

Brimming with floral motifs and butterflies and contained within an ornate border, the lush details of “Grand Jardin” emerge in the textures of each group of coils and in the intricate shapes of the flowers and foliage. Inspired by the patterns and process of making Persian rugs, Nilsson sees parallels between weaving and quilling, and is amused by the nature of improvisation in a process that is so slow-moving and meticulous. “Having a working relationship with one piece for such a long period of time brought novel thoughts and emotions and required new things of me as an artist and as a person,” she says. 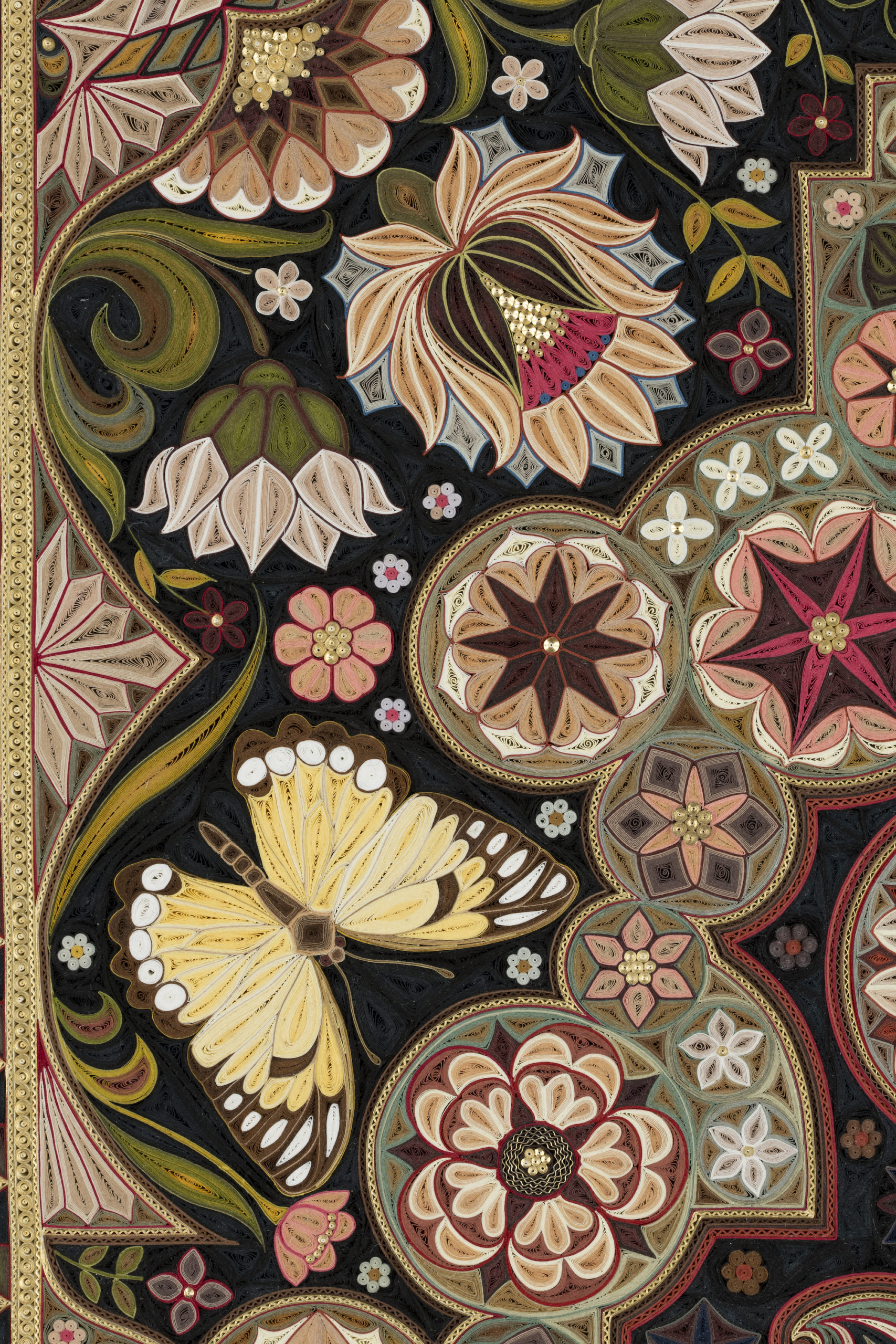 Musgor, an angular green monster, roams a futuristic paper world in “Urban Mutations.” The exhibit, which originally was on view at the Museo del Humor in Buenos Aires in November 2018, showcased work from 17 artists—including Estudio Guardabosques (previously), a Buenos Aires design studio by Caro Silvero and Juan Elizalde. The artists reinterpreted historical components of La Plata and presented them in futuristic terms. The series depicts Musgor, its world of origin, and a few of the fictional space’s other creatures, including a beetle whose face appears on its body and a ten-legged insect that resembles a leaf.

With a focus on the Natural Museum of La Plata, the artists say they wanted to maintain the influence of a science museum, which included incorporating the research and speculation central to interpreting unknown beings. Combining this idea with the large monsters of Japanese kaiju films brought the group to these paper figures. Explore more of Estudio Guardabosques’s geometric paper creations on Instagram. In designer Olga Prinku’s floral wreaths, hundreds of dried plants and flowers are sewn into the shape of large capital letters. Flower heads spring out of the tulle as if magically sprouting from planted seeds Prinku had scattered weeks before. Although a graphic designer by trade, her project has sparked a love affair with weaving and craft, and encouraged her to experiment with several different mediums.

“This particular technique of weaving flowers on tulle actually came to me in a dream,” Prinku tells Colossal. At first she began placing dried flowers on a sieve, which resembled the net structure of tulle. Once she began using the new medium, she looked to her garden for fresh flowers. She initially used fresh flowers for her works, but the natural objects began to shrink as they dried, which left gaps in her designs.

“Now I use dry flowers,” she explains. “Some I buy readily dried, and some I pick from fresh and dry myself using silica gel. I also collect seed pods at the end of the season, which I use as they are.”  Prinku alters what flowers and plants she uses depending on the season. “I’m still learning a lot through experimenting about what flowers are the best – I’m basically looking for ones that are good at holding their color when dry and that have thin stems that I can use on the tulle.”

Prinku’s artistic process has fostered her appreciation of beauty and intricate details that exist in nature. “I’ve become much more observant about the plants that are growing all around where I live, and that fuels my creativity too,” she says. To learn more about Prinku’s work visit her website and her Instagram. 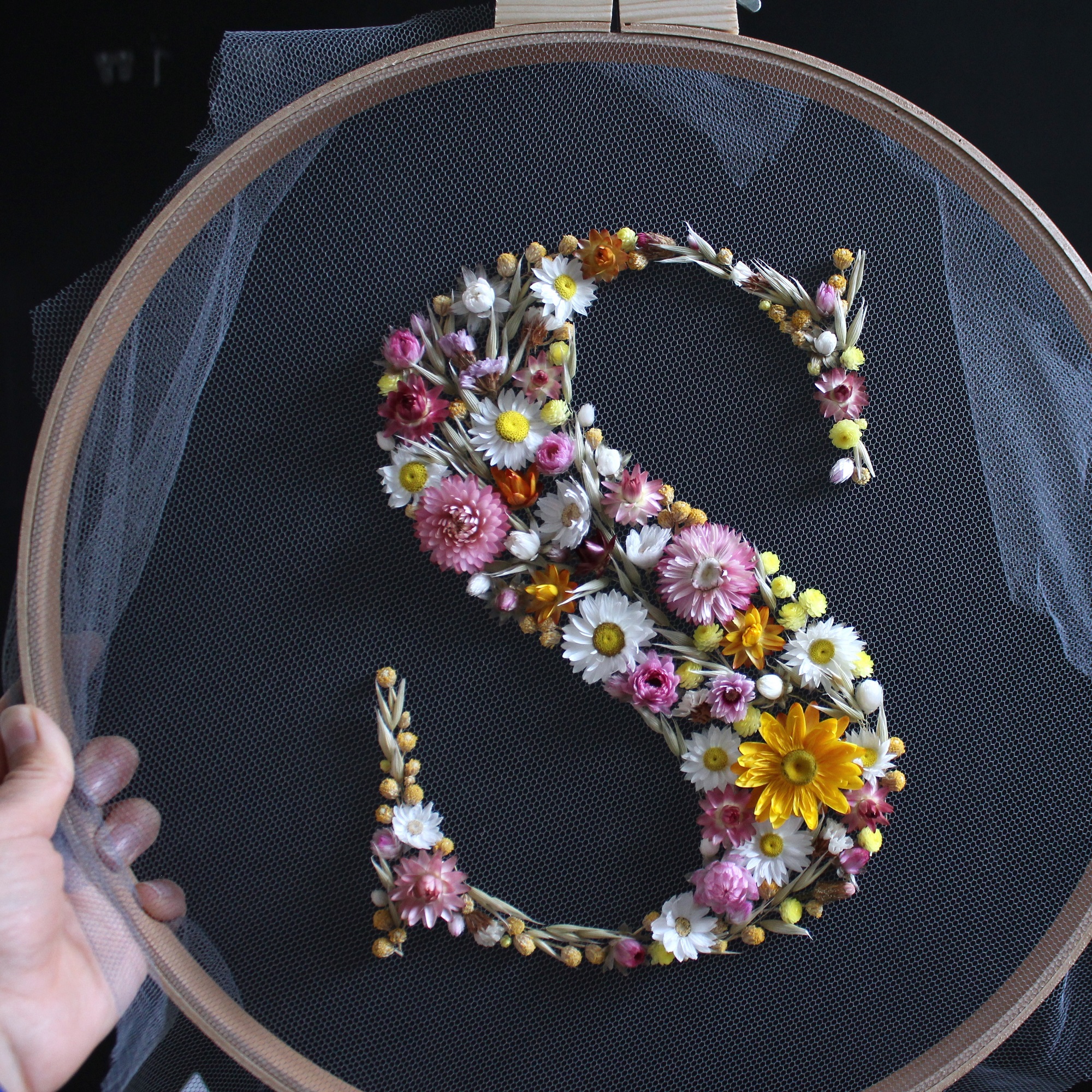