Archaeologists Discover What May Be the World’s Oldest Crayon

The first blue pigment to have been created in over 200 years will serve as the newest Crayola crayon. “YlnMn blue” was not developed within an arts context, but rather accidentally discovered in in an Oregon State University (OSU) chemistry lab in 2009. Graduate student Andrew Smith made the discovery alongside Mas Subramanian after combining manganese oxide, yttrium, and indium, elements which also serve as the inspiration for the pigment’s name.

“Most pigments are discovered by chance,” Subramanian explained in a statement. “The reason is because the origin of the color of a material depends not only on the chemical composition, but also on the intricate arrangement of atoms in the crystal structure. So someone has to make the material first, then study its crystal structure thoroughly to explain the color.”

YlnMn blue has a unique elemental structure which allows its manganese ions to absorb red and green wavelengths of light, only reflecting back a deep blue. This color is so durable that even when placed in oil or water it does not fade which makes it an attractive and versatile commercial product.

Shepherd Color Company, which received exclusive licensing to YlnMn blue in 2015, has since partnered with Crayola to launch its newest crayon. YlnMn blue’s name will be replaced this summer after a public rebranding contest by Crayola which ends June 2. The vibrant blue will take the place of Crayola’s yellow Dandelion crayon, which is being retired after a 27-year-run. (via Hyperallergic)

Professor Mas Subramanian gazes at YInMn blue which was discovered in his lab in 2009. (Photo courtesy of Karl Maasdam/Oregon State University) 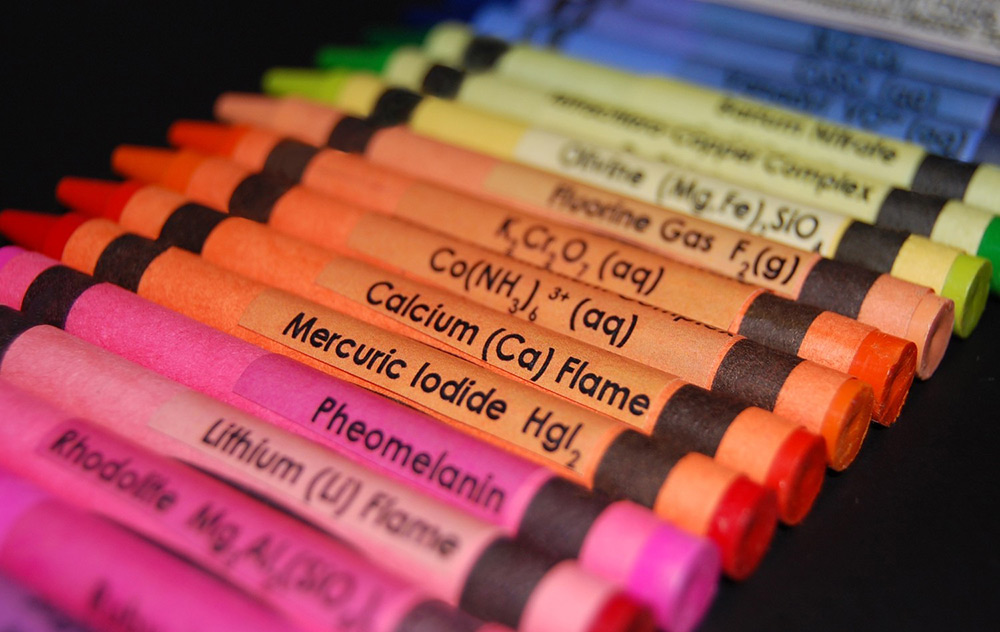 The folks over at Que Interesante created this clever sticker pack for crayons, effectively turning color names into the chemical compounds that correlate with each hue. The sets seem like a fun way to learn for a science-minded family and are available in number of different packs or in bulk for schools. (via Laughing Squid) For spring 2015, Bloomingdale’s reached out to several designers to create pieces that both matched and were constructed by iconic Crayola colors. The pieces are designed with playful colors, yet have a sharp edge, the points of the crayons adding 3D elements to many of the elaborate pieces. The most dynamic, a bright yellow dress designed by Nanette Lepore, showcases a bustier of organized pinwheel crayon segments extending from the ornate neckline.

Other designers chosen were Rebecca Taylor, Clover Canyon, Rebecca Minkoff, Torn by Ronny Kobo, and Parker. Parker added a creative spin to the project, incorporating the Jungle Green crayon wrappers as faux-fabric within their designed romper. Designers Derek Farrar and Laurieanne Gilner explained that not only was the piece environmentally sound, but also gave them a serious case of spring fever.

The pieces, photographed by Matthew Carasella, are currently on display at the 59th Street Bloomingdale’s location in New York City, and more detailed shots can be found on Carasella’s portfolio site here. (via Laughing Squid)

Update: It should also be noted that another artist, Herb Williams (previously), has been creating similar Crayon fashions since 2007. “Bittersweet” by Torn by Ronny Kobo