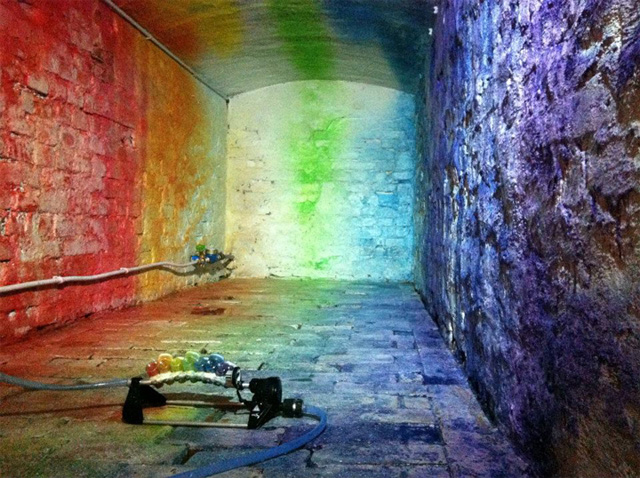 House of the Rising Sun Covered by Legacy Computer Equipment

Although this has been making the rounds here and there it’s taken me a few weeks to actually sit down and appreciate this cover of The Animals House of the Rising Sun covered entirely using audio samples recorded from legacy computer equipment and diagnostic machines. The piece uses four primary “instruments” including an HP Scanjet 3P, an Atari 800XL with an EiCO Oscilloscope as the organ, a Texas instrument Ti-99/4A with a Tektronix Oscilloscope as the guitar and a hard-drive powered by a PiC16F84A microcontroller as the bass drum and cymbal. Video and music by PURETUNE.

The Chromatic Typewriter Types in Color

Washington-based painter Tyree Callahan modified a 1937 Underwood Standard typewriter, replacing the letters and keys with color pads and hued labels to create a functional “painting” device called the Chromatic Typewriter. Callahan submitted the beautiful typewriter as part of the 2012 West Prize competition, an annual art prize that’s determined by popular vote. I don’t know how practical painting an image with a color typewriter is, but if it is, Keira Rathbone can do it.

File this under archaic devices I had no idea existed. Here’s a once in a lifetime opportunity to own a mint-condition Keaton Music Typewriter. Patented in the early 1930s, there are only a dozen or so in existence. What does it do? Exactly what you think it does. Via musicprintinghistory.org:

The Keaton Music Typewriter was first patented in 1936 (14 keys) by Robert H. Keaton from San Francisco, California. Another patent was taken out in 1953 (33 keys) which included improvements to the machine. The machine types on a sheet of paper lying flat under the typing mechanism. There are several Keaton music typewriters thought to be in existence in museums and private collections. It was marketed in the 1950s and sold for around $225. The typewriter made it easier for publishers, educators, and other musicians to produce music copies in quantity. Composers, however, preferred to write the music out by hand.