An Elephant Appears to Emerge from a Cliff Face in Iceland Apropos of nothing, here’s a few photos of a natural rock formation off the coast of Iceland that looks like an imposing elephant with its trunk dipped in the Atlantic. Located on the island of Heimaey, the mountainous shape appears to be formed mostly from basalt rock that has the uncanny appearance of wrinkled elephant skin. You can see few more shots over on Flickr. (thnx, Amber!) All photos by Philipp Schmidli

Following a successful campaign on Indiegogo which raised nearly $26,000, artist Sipho Mabona followed through on his promise to fold a life-sized elephant from a single giant sheet of paper. The piece stands over 10 feet tall (3 meters) and took a team of nearly a dozen people over four weeks to fold. The final sculpture is on view at KKLB in Beromünster, Switzerland. Photos by Philipp Schmidli. (via My Modern Met) 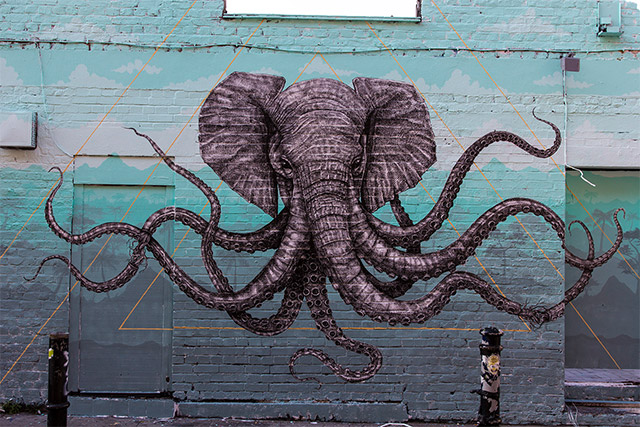 This awesome hybrid elephant-octopus was just completed this week by Puerto Rican artist Alexis Diaz. Comprised of thousands of tiny brushstrokes, the mural took a week to paint and you can see it yourself on Hanbury Street off Brick Lane. Chicago artist Phineas X. Jones also conceived of an “octophant” which has had numerous incarnations over the years. (via StreetArtNews)