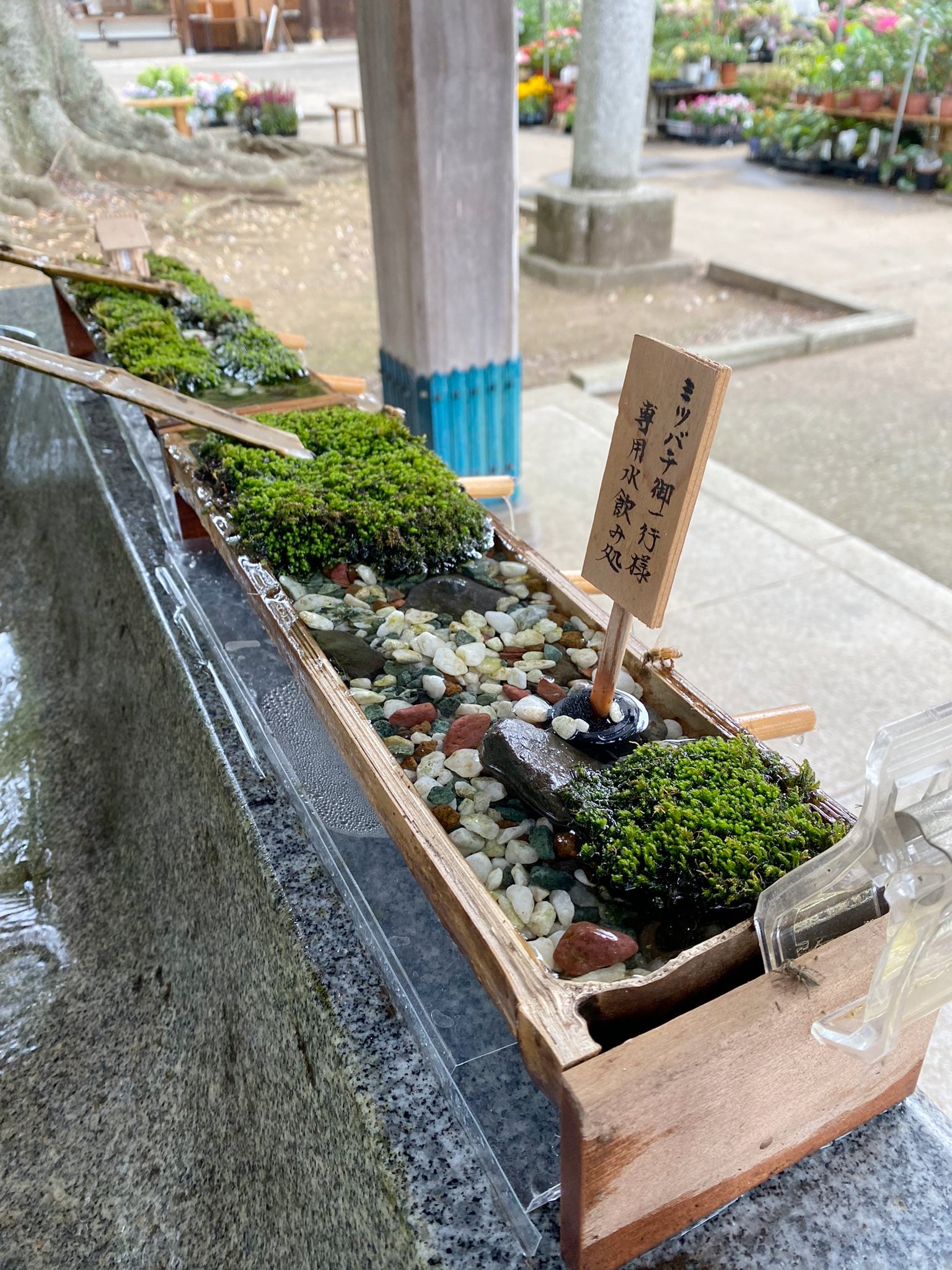 All images courtesy of Hitokotonushi Shrine

Established more than 1,200 years ago in 809, the historic Hitokotonushi Shrine just outside of Tokyo becomes a secondary sanctuary for local pollinators each summer. The on-site water basins, which are designed to hydrate humans, undergo a miniature makeover complete with moss, tiny architecture, and climbing surfaces so that the spaces are hospitable to the region’s bee population, offering a clean source used for drinking, feeding their offspring, diluting honey, and helping to stabilize the hive’s temperature. Just like humans and other animals, bees sometimes struggle to find clean water in hot weather, and when they do, they risk drowning if there aren’t enough spots to land. According to the shrine’s Twitter, this year’s oasis is already buzzing with visitors, which you can see in the video below. (via Spoon & Tamago) In collaboration with master beekeeper Mylee Nordin and swarms of the honey-producing insects, artist Ava Roth develops elaborate encaustic works that literally visualize the interaction between humans and the environment. The Toronto-based artist stitches small collages with leaves, twigs, rose quartz, porcupine quills, and other organic matter before handing control over to her six-legged counterparts, who faithfully build hexagonal cells around the original piece. Once complete, the waxy inter-species works are brimming with texture and color variances that highlight the inherent beauty and unpredictability of nature.

Whereas previous iterations of Roth’s embroideries used stock hoops at the center, she now enlists the help of woodworker Bernoel Dela Vega, who custom-makes inner and outer frames in the same dimensions that are typical in Langstroth hives. “Each piece requires some kind of border that separates my work from the bees’ work,” she says. “This (change) has allowed me to experiment with different sizes and shapes and has helped to make every aspect of my work hand (or bee) crafted.” 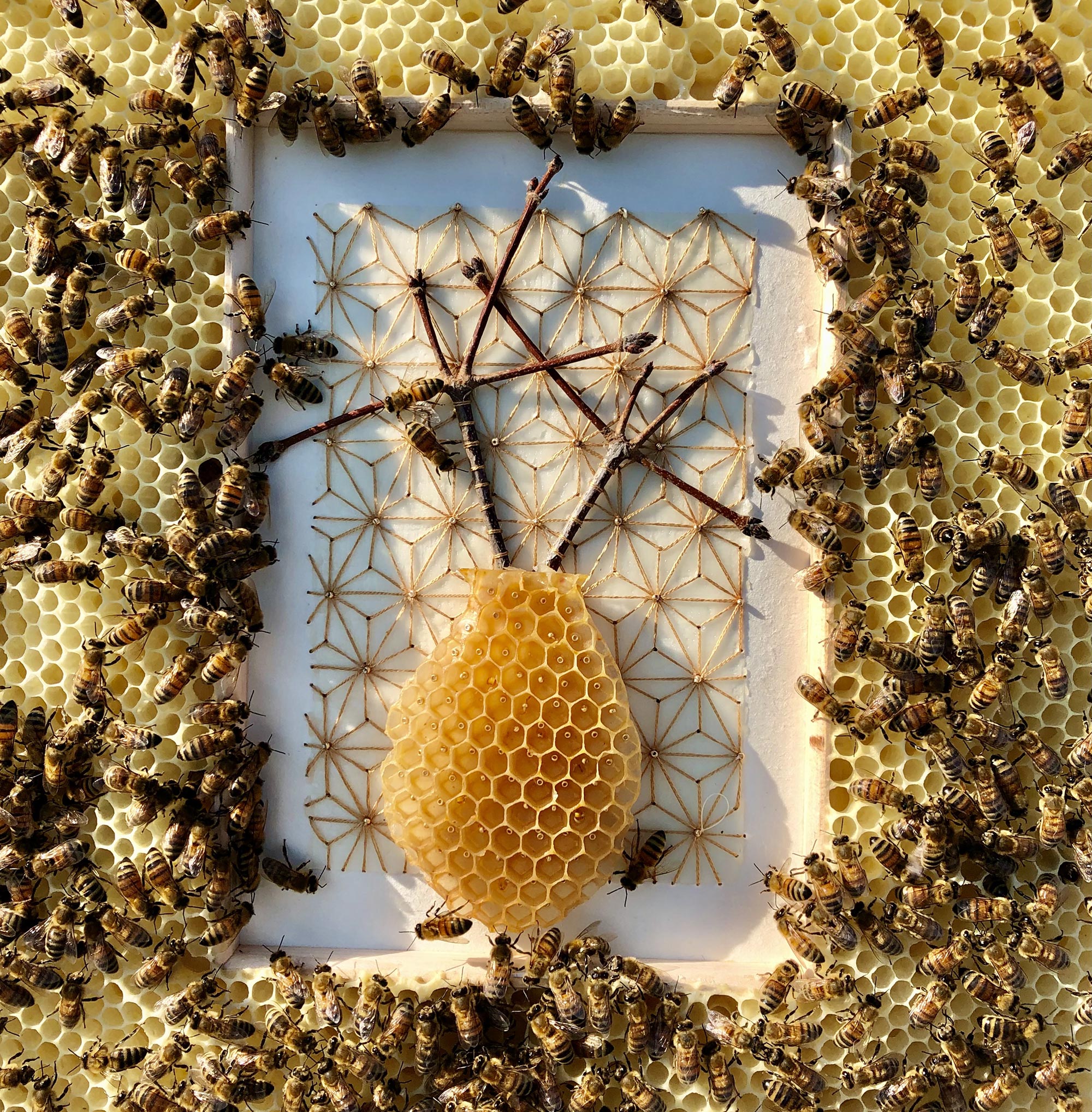 Roth tells Colossal that although it’s possible to manipulate the hive conditions to produce a 3D honeycomb or work with artificial elements, she creates self-imposed limits to use only organic materials and engender environments that mimic those bees would gravitate toward naturally. She explains:

I recognize that Langstroth hives are not a natural habitat for bees, but neither are most of the spaces that humans find themselves occupying right now. Ultimately, this project is about exploring the ways in which humans collide with the natural environment today and finding ways to make making something beautiful from this specific time and place. This means working in cities, in manufactured hives, in the midst of enormous environmental and political despair.

Roth will be pulling multiple pieces from her hives in the next few weeks, and you can follow that progress on Instagram. She also has a few works on paper currently available at Wallspace Gallery in Ottawa. 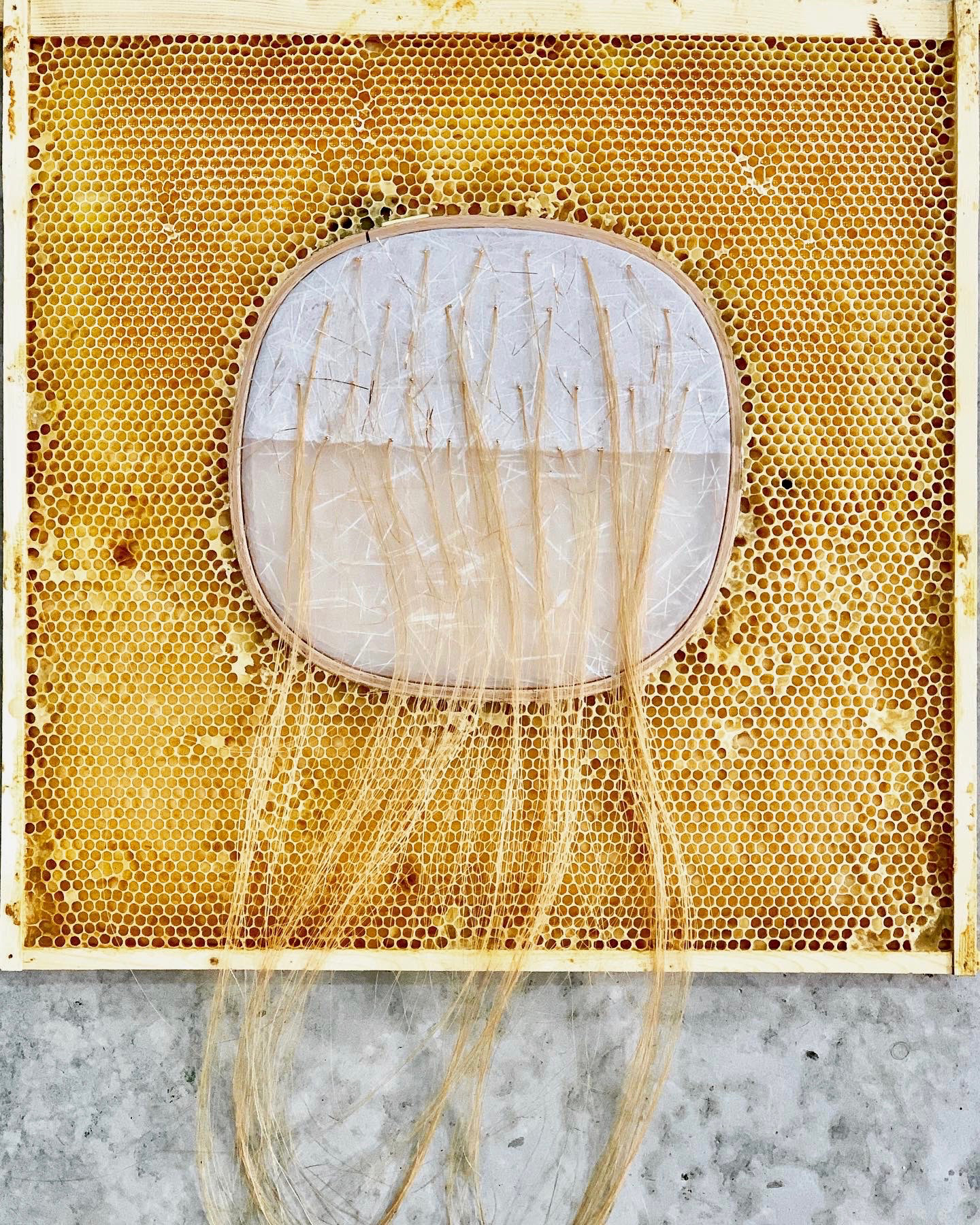 Phoenix-based artist Lesley Green (previously), of Bespoke Glass, merges natural pigments and geometric shapes in her stained-glass pieces. Some of her recent work includes a trio of translucent birds that mimic paper cranes and circular pieces patterned with multi-hued rounds. Green’s yellow honeycomb drops, though, were one of her first completely hand-cut designs and are created in single hexagons and groupings of two, three, and four.

The artist said on Etsy that her light-refracting projects are the result of “considering (the) ways stained glass could be reimagined to be flexible, customizable and portable,” rather than a permanent feature fixed in a house or building. To see the delicate formations Green has available, check out her shop or Instagram. 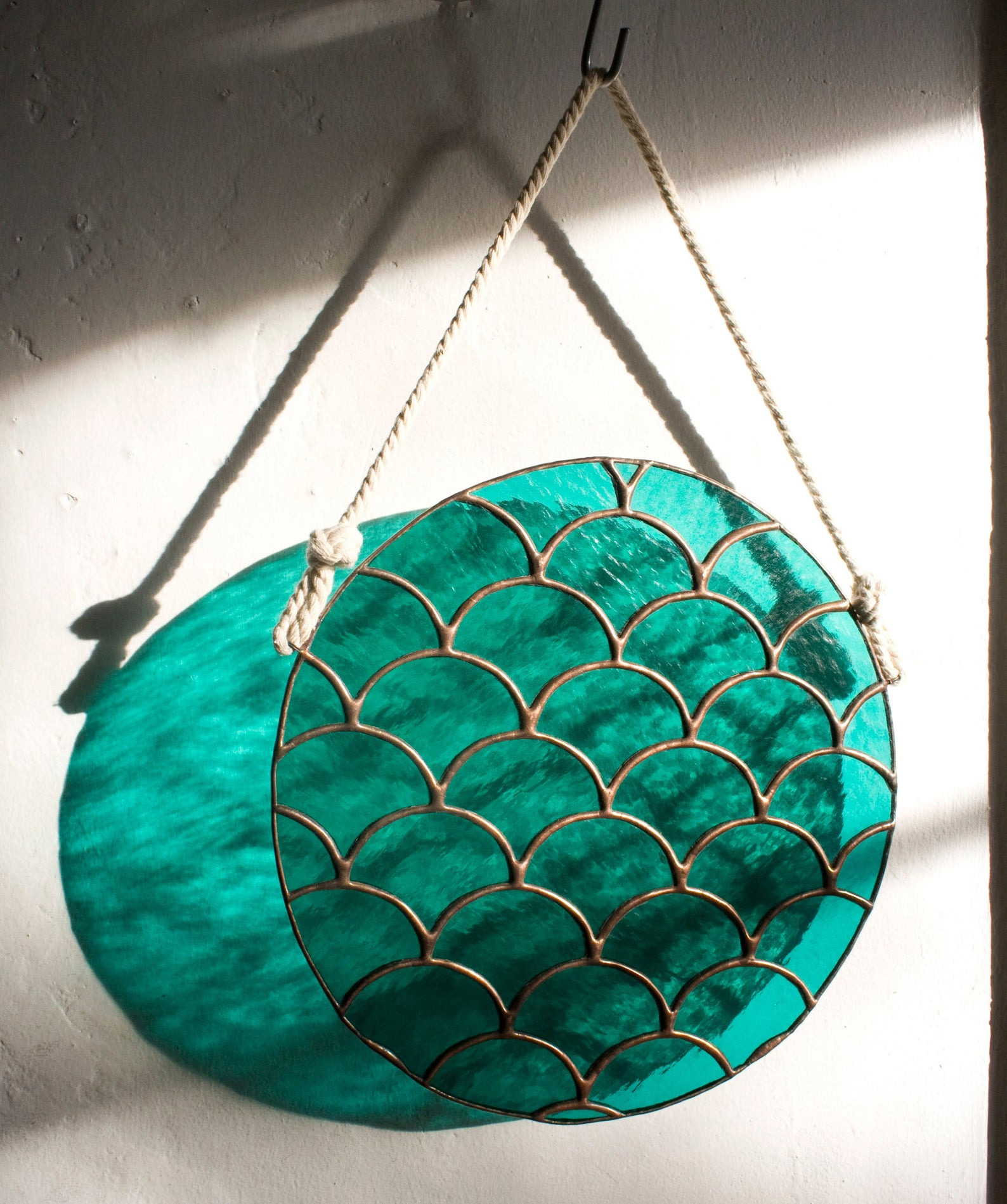 The Last Honey Hunter: One Man’s Quest to Gather Honey From the Cliffs of Rural Nepal

The Last Honey Hunter was released in 2017, but is new to us at Colossal and is a powerful story worth a watch at any point. Set in rural Nepal, the half hour documentary chronicles the Kulung culture’s traditions of honey collection. Using precarious methods to scale treacherous cliffs, the Kulung seek to harvest a particular type of psychotropic honey that has spiritual significance to the community. We won’t seek to paraphrase the intricacies of the tradition; when you have some time, go into full screen mode and sink in to the story.

Written and directed by Ben Knight, The Last Honey Hunter is a co-production of Camp4 Collective and Felt Soul Media, in association with National Geographic and with the community expertise of dZi Foundation. You can also read about the Kulung honey rituals in a National Geographic article. Gone are the days of full coverage beekeeping suits and padded gloves with the invention of a radical new hive by Italian company Beeing, which was founded by a third-generation bee keeper. B-box is the very first system designed for homes and urban environments, with a small footprint that can fit on even the tiniest of balconies or backyards. Not only does the simplified hive makes raising bees and harvesting honey easy for novices, it benefits the bees as well. A seven-foot-tall chimney ensures that bees remain out of range when coming in and out of the hive, while uniquely designed chambers present only small sections of the honeycomb so users are not disturbing or impacting the health of the hive by extracting a large sheet.

With 80% of the world’s food supply needing the help of bees, coupled with major threats to a declining bee population, it is more crucial than ever that solutions to this crisis are discovered and put into action. You can learn more about B-box in the video below, and contribute to their campaign by visiting IndieGoGo. (via designboom)