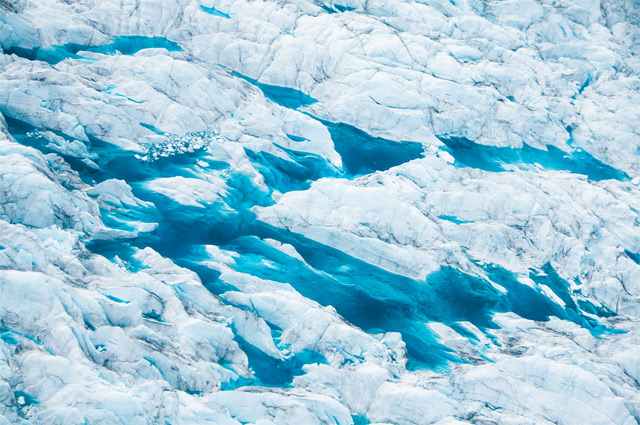 Nuremberg-based graphic designer and photographer Jan Erik Waider has traveled on numerous expeditions north to Greenland, Iceland, Scotland, and the Faroe Islands off Denmark where he shot these beautifully surreal landscapes of icebergs, glaciers and cliffs. I first stumbled onto his Icebergs in Fog series shot earlier this year in Ilulissat and Disko Bay in Greeland and then found his website where you can see all of these photographs in much higher resolution, really, go look, just incredible work. Despite the foreboding, harsh climate depicted in these photographs Waider seems to transform the landscapes into something strangely peaceful and idyllic. If you’re interested he has prints available on request and you can also follow him on Facebook. (via behance) We’re all familiar with the most common shapes of ice: snow flakes, icicles, snowmen, cookie dough ice cream. But break out the macro lens and suddenly we’re in unfamiliar territory as ice branches out, curls in on itself, and grows in shapes that look more like the delicate leaves of ferns than solid cold water. Russian photographer Andrew Osokin has done a phenomenal job of capturing such bizarre ice formations, you can explore hundreds more photos over in his LensArt profile. (via the curious brain) The Australasian Antarctic Expedition team explored Antarctica from 1911 through 1914, studying geology, meteorology, and mapping unknown lands. Here, a photograph by Frank Hurley shows the team meteorologist C.T. Madigan with an incredibly thick ice mask after a day of weathering the elements. Here’s another more extreme example. The photo is from the National Library of Australia Commons which recently made several hundred historical images available online.

Cameron Zotter, a design student at the Maryland Institute College of Art, made this typeface by photographing uppercase letters made of ice at specific points during the process of melting. The final image of melting letterforms is really striking, would make a nice print. See also: snow typography.(via found by james)

Incredibly beautiful capture of a frozen statue. Spent twenty minutes trying to find the photographer with no luck. Anyone? (via fasels suppe)

Update: It’s by photographer Miika Järvinen, as part of this series. Unfortunately there’s not an easy way to browse it, but if you like barren icescapes, there’s some real gems. (thnx, william!)