The Enchanting Echoes of the Cristal Baschet, a Rare Organ Made of Glass Rods, Metal, and Wood

Invented in 1952 by Bernard and François Baschet, the Cristal Baschet (also called a Crystal Organ) is a unique instrument that outputs an even more unique and artful sound. In the video above, multi-instrumentalist and film composer Marc Chouarain explains how it works and demonstrates techniques for turning finger rubs and drags into deep melodic echoes.

According to musician and rare instrument performer Thomas Bloch, models of the crystal organs range from 3.5 to 6 octaves and are made of 56 chromatically tuned glass rods. To play it, musicians rub the rods with wet fingertips. “The vibration of the glass is passed on to the heavy block of metal by a metal stem whose variable length determines the frequency,” Bloch explains. “Amplification is obtained by fiberglass cones fixed on wood and by a tall cut out metal part, in the shape of a flame. ‘Whiskers’ (moustaches), placed under the instrument, to the right, increase the sound power of high-pitched sounds in vibrating by sympathy.”

Ravi Shankar, Damon Albarn (Gorillaz), Daft Punk, Radiohead, Tom Waits, and Manu Dibango are among the musical acts who have used the Cristal Baschet, according to an official Baschet Sound Structures Association brochure. For more from Chouarain, check out his Facebook page. (via Twisted Sifter) Wolfram Kampffmeyer (previously) loves to play with paper. The German artist uses the seemingly simple material to create three-dimensional shapes and figures, often designing products that users can assemble themselves. His newest project, PAPERorgan, is a fully functioning modular organ that is fueled by an inflated balloon. The instrument can run for approximately 40 seconds on one balloon’s-worth of air, and plays a range of notes depending on how each user chooses to tune and expand their organ. For paper organ aficionados, Kampffmeyer clarifies that he has spoken with fellow instrument designer Aliaksei Zholner (previously) to ensure that his design and commercial product are not derivative or competitive. 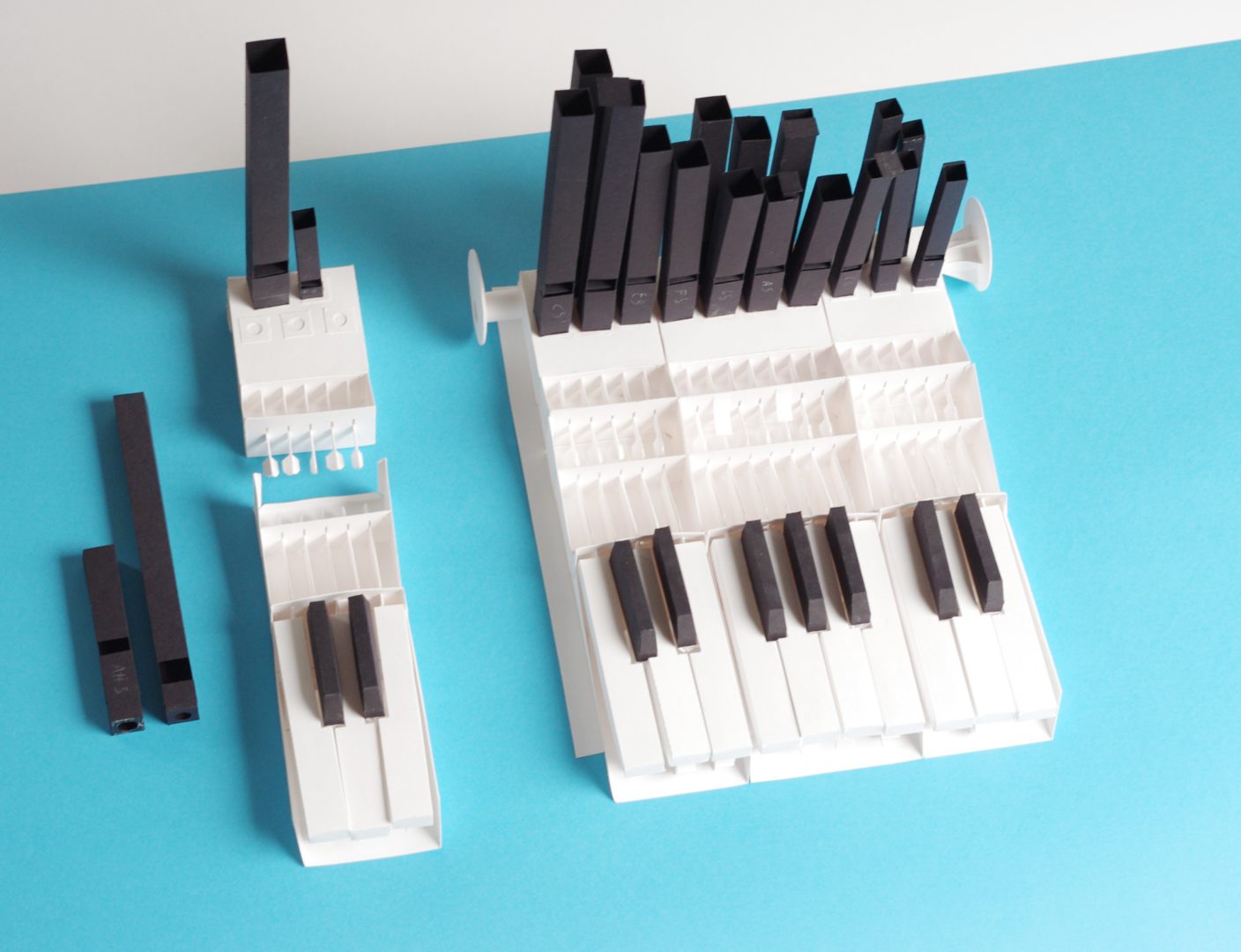 The Unsettling Timbre Produced by a 7-Foot-Wide Gong

Paiste Gong Master Sven Meier demonstrates how to strike and a seven-foot-wide gong for maximum impact in a Youtube video by Wind Chimes Australia. After a few light taps to the middle of the instrument it bellows out with a dark and unsettling timbre that seems to resonate with doom. During the short demonstration Meier uses a few different techniques, extracting a range of sounds from the massive 80″ nickel silver gong. For more explorations into the sounds and vibrations produced by XXL gong check out these videos posted on Kottke.

Aliaksei Zholner (previously) is known for making fully functioning models from cardboard and paper. His latest piece is a miniature 18-key piano that is tuned to play popular and classical pieces such as Fryderyk Chopin’s Polonez b-moll, Ludwig van Beethoven’s Für Elise, and Scott Joplin’s The Entertainer. The “strings” of the piano are created from paper strips connected to a tension mechanism similar to a guitar and struck by hammers made from paper and cardboard. The black cardboard body is branded with Zholner’s name above the keys in the style of popular piano makers such as Bösendorfer and Bechstein. A more detailed explanation of the construction (in Russian) is available on the Only Paper forum, and you can view more of his paper demonstrations on his Youtube channel.