Responsive ‘Hexi’ Wall Ripples and Wobbles Based on Nearby Motion Based in Canada, designer Thibault Sld explores the realm where “geometry, light, mechanisms and interaction collide,” by creating interactive displays and lights that respond to exterior input. One of his most captivating ideas is Hexi, an interactive array of 60 hexagonal modules embedded with mechanical servos that use data from a nearby depth camera to physically respond to nearby motion. It would be amazing to see an entire room or hallway covered in something like this. You can learn more over on his website, or watch the video above to see it in motion. (via Designboom) Features on interior design here on Colossal are few and far between, there are times when a space is so wholly original it’s just too hard to pass up. Case in point: Truth Coffee Shop in Cape Town, South Africa. This radically designed steampunk-themed coffee shop was created by Heldane Martin who considered the form factor of espresso machines and coffee roasters to be somewhat similar to the Victorian futuristic fantasy style found in the aesthetic of steampunk. The hope was also to personify Truth’s attempt at roasting the very best coffee by offering a perfectly executed space.

Every inch of the coffee shop is packed with visual candy from large saw-blade tabletops to beautiful overstuffed booths and an ornate array of coffee making equipment that looks absurdly complex, almost like interior of a World War 2 submarine. If that wasn’t enough, Martin also crammed the space with vintage typewriters, Singer sewing machines, and old candlestick telephones. The design even extends to the restrooms which have exposed copper pipes, old extending mirrors and victorian tap levers.

You can see many more photos over on Heldane Martin. All photos above courtesy Shanna Jones. (via Yatzer) 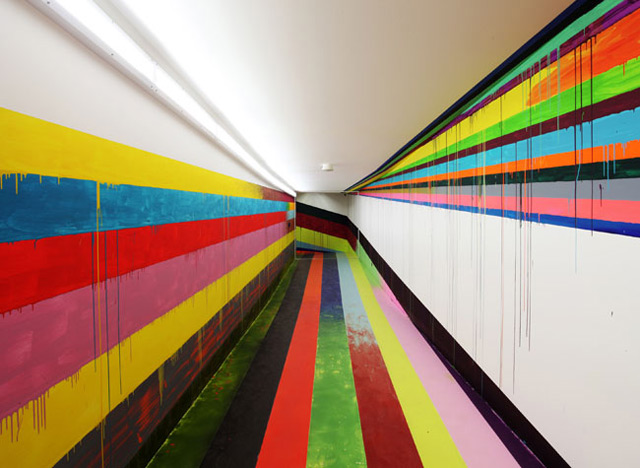 Custom Lighting Made from Paper Cups, Spoons and Coffee Filters by Christian DuCharme

The folks over at CollabCubed spotted these great custom lights by Christian DuCharme installed at the Lafayette Espresso Bar and Market in New York. The first is the 300 Cups Lamp made from, yes, 300 paper coffee cups while the others are made from plastic spoons and coffee filters. A really striking use of materials. See more photos here.