“Plate No. 371.” All images © Johanna Goodman, shared with permission

Known for her vivid collages of female figures whose billowing garments embody an array of landscapes, architecture, flora, fauna, artworks, and symbolic objects, Johanna Goodman continues to celebrate the dynamism and diversity of women throughout the ages. Sourcing photographs and motifs from the public domain in addition to her own photographs, her ongoing Catalogue of Imaginary Beings series (previously) encompasses a broad spectrum of historical and contemporary imagery.

Monumental women confront the edges of these works, some of which are life-size at six feet tall, and their towering presence and voluminous dresses are ripe for messages and portraits of influential figures. Goodman’s response to the U.S. Supreme Court’s decision to overturn Roe v. Wade in June of this year spurred a series of collages that contain dozens of protest posters and slogans supporting the right to bodily autonomy. Many of the artist’s pieces are titled as numbered plates, such as “Plate No. 337, Ruth Bader Ginsburg,” referencing tipped-in color plates in old history and art books that were printed separately from the rest of the volume and often glued into place.

Goodman’s work will be included in the exhibition Drawings You’ve Never Seen at Egg Collective in Tribeca, which opens September 1. You can find more of her work on her website and Instagram. “In Us We Trust,” poster design for Persisticon V Towering female figures fill the frame in large-scale collages by Johanna Goodman (previously). Using a range of contemporary and historic materials and visual motifs, ranging from bright red glitter to greyscale photos of classical sculptures, Goodman builds powerful protagonists from disparate materials. Elongated torsos are with clipped vintage photos, contemporary model shots, and even sculptures and paintings. Goodman places each figure in an imagined landscape—often oceanside or celestial—with the open horizon adding to the grandiosity of each “Imaginary Being”.

The multidisciplinary artist uses a combination of her own photographs of everyday objects and places combined with found images. Goodman noted in an interview with Create that she is fastidious about using images that are in the public domain, though it can be limiting particularly when sourcing historical images of diverse women. Goodman has created almost 400 plates in the “Imaginary Beings” which started nearly four years ago. “It is still going strong, and no one is more surprised than I am!” the artist tells Colossal. “At its inception I had no idea that what I was doing was inventing my own language, or a template, wherein I could endlessly experiment, explore, and process everything in my world.”

She continues to draw inspiration from a disparate range of sources: “I’m inspired by fashion, nature, science, politics, painting, sculpture, traveling, signage, tag sales, architecture, textiles, bugs, outer space, you name it. And the beauty is that there are no rules, no boundaries; I get to play with all of it.” Goodman also touches on current events, particularly stories and issues that center women. She explains to Colossal that in 2018 she created a piece based on Christine Blasey Ford, as well as all the women elected to Congress. More recently, a trip to Los Angeles inspired a series using the photos she took there. “The possibilities are endless and I still feel as inspired and hungry as I felt when the project began,” Goodman says.

See if you measure up to Goodman’s figures—some of which measure six feet tall—at her upcoming solo show. “Selections from the Catalogue” is on view November 21, 2019 through January 17, 2020 at David Weeks Studio in New York City. Goodman also offers prints of her work in an online store, and shares recent projects and artistic inspirations on Instagram. Taller than trees and towering over buildings, Johanna Goodman‘s pieced together female forms appear to stretch far above the landscapes before them. The collaged works, which combine elements of art, design, and architecture, are a part of Goodman’s series titled The Catalogue of Imaginary Beings, which aims to explore the individual’s role in history and popular culture.

“[The Catalogue of Imaginary Beings] draws its inspiration from a wide spectrum of sources—including magical realism, surrealism, and symbolism—and more specific references such cultural artifacts as talismans, idols, totems, and all of the material detritus that surrounds all of us all the time,” Goodman told Ms. “These characters are composites embodying notions of ‘the warrior,’ vulnerability, industry, the universal and the personal. They reference these identities as they’ve been depicted historically through art, literature, and commerce.”

Recently Goodman has created works that commemorate the strong women involved in the Women’s March on Washington and its sister marches across the globe. She has also created work inspired by the Climate March that occurred this past April (like the figure seen erupting from a smokestack below). You can view more of Goodman’s elongated collages on her Instagram and Tumblr. 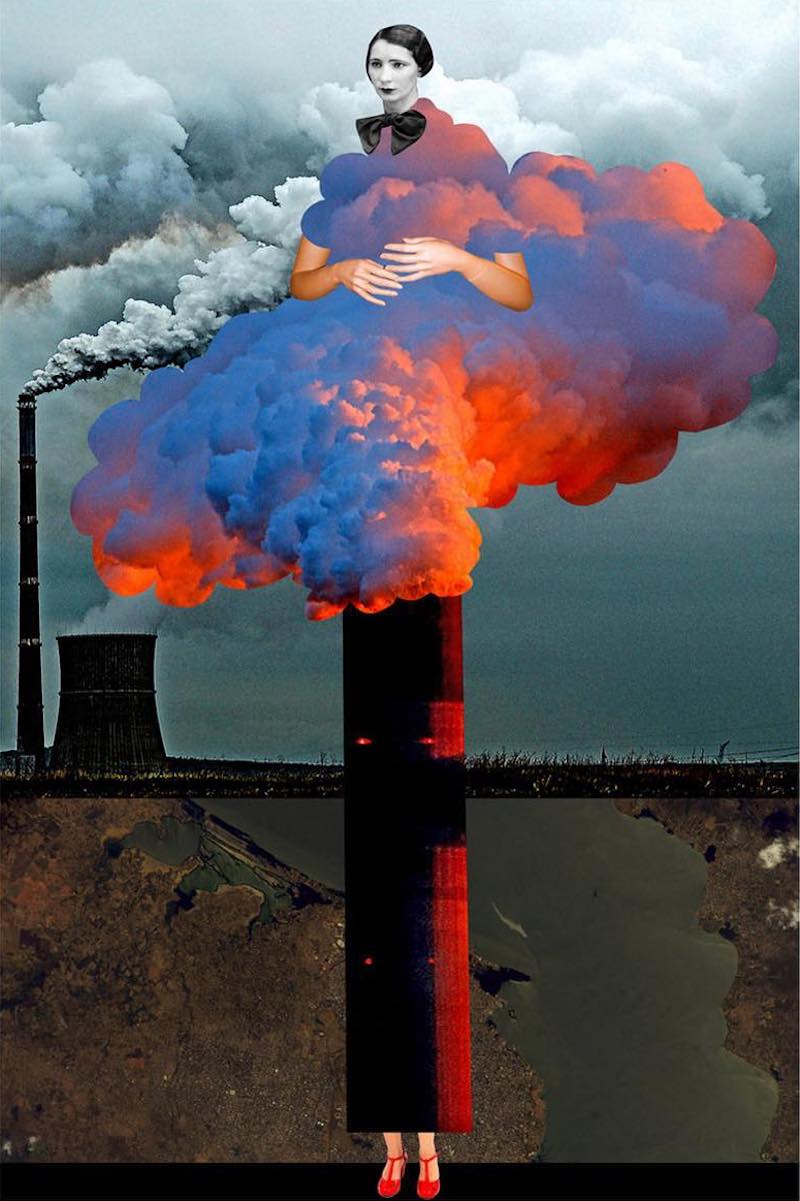