Houston-based artist Kevin Peterson (previously) continues to translate the uncertainty of today’s world into dystopian works with equal amounts despair and optimism. Scenes brimming with waste material and urban decay find boundless confidence and life in children, who unflinchingly nuzzle up to polar bears or balance atop a crumbling brick wall. Offering hope in the face of climate catastrophe and economic collapse, Peterson’s oil paintings are deeply personal, sometimes reflecting his own son and daughter as subjects. The artists tells Colossal:

I hope the coming generations are wiser, more empathetic, more courageous.  When I’m watching my kids, I’m always projecting my own insecurities and fears onto them, assuming they will suffer from my own deficiencies. I can not tell you how excited I feel when I see them diverge from those characteristics, and I realize they are not me. They are better than me in so many ways, and that is what anchors my hope for them and the future.

Many of Peterson’s works shown here are on view through September 24 at Thinkspace Projects in Los Angeles, which also has a couple of prints available. You can also follow his forward-looking practice on Instagram. 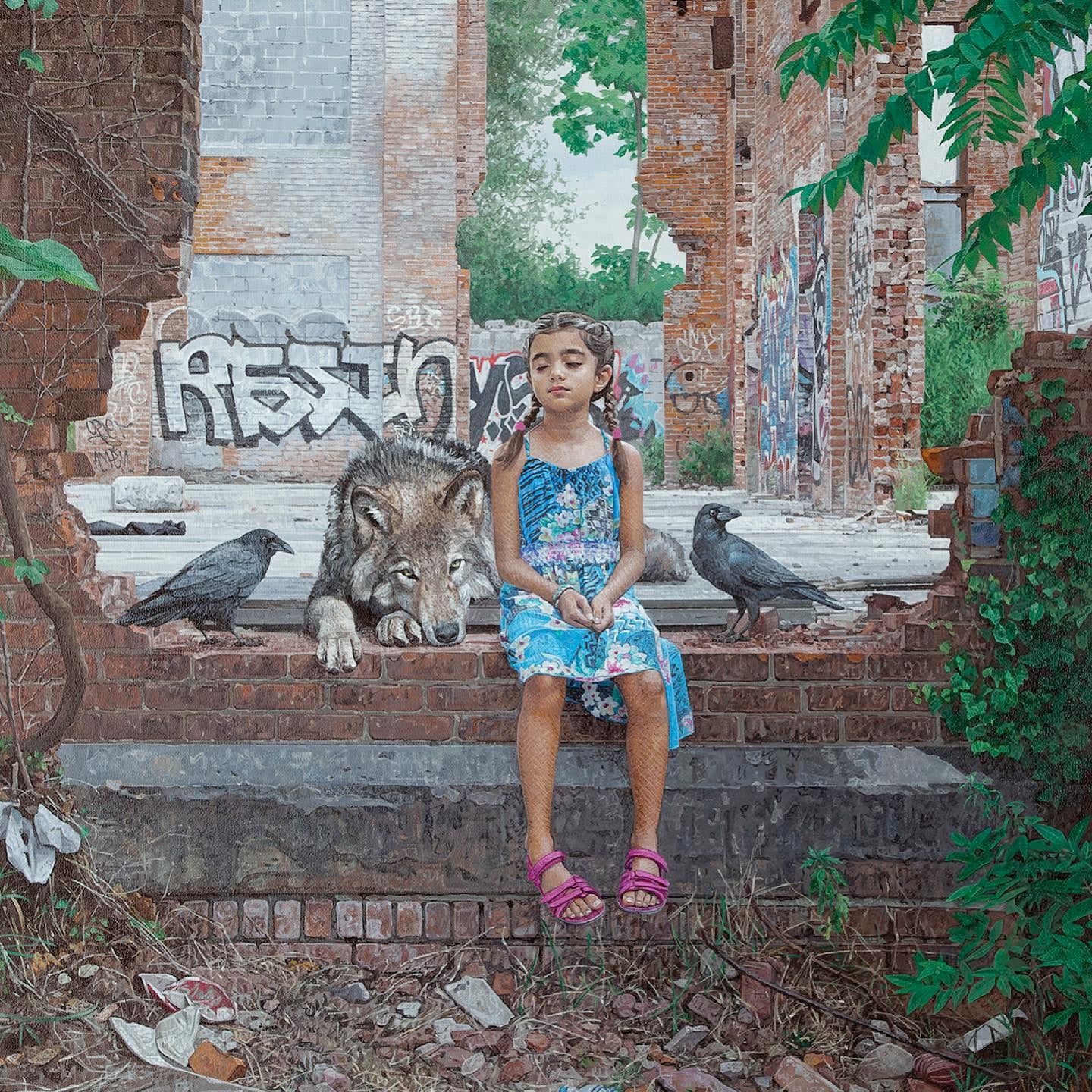 Interview: Kevin Peterson Shares His Fascination with Graffiti and How Optimism Informs His Paintings Known for his scenes of urban decay, artist Kevin Peterson (previously) is profoundly optimistic, a vision he shares in a recent interview with managing editor Grace Ebert. The Houston-based artist often positions lone children alongside wild animals, an inter-species mix that offers an escape from the destruction and hope for the imagined future.

I suppose the kids in my paintings are a reflection of a hope that I have that people will learn from past mistakes and face the future with a sense of calm reason. Part of that is re-prioritizing what we value. The work is a vision of a new generation of kids that will not rule the world like tyrants but will respect nature, other people, and the world we have.

In this conversation, Peterson explores the effects the current moment is having on his artistic practice, how his fascination with graffiti has evolved, and his understanding of change. Thanks to the generous support of Colossal Members, this interview is available to all readers. For several years artist Kevin Peterson (previously) has created paintings that occupy the same fictionalized world. His imagined environments are occupied by children and animals— individuals band together as they navigate depleted urban environments. The works pair the innocence of its subjects against a broken and crumbling world, addressing the various journeys we each take through life.

Recently, Peterson has begun to paint just the animals in these scenes, rather than pairing them exclusively with children. “In my head, it’s the same world,” the Houston-based painter tells Colossal, “the animals and kids just haven’t met up yet. Maybe they’re searching for each other.” His solo exhibition Wild opens at Thinkspace Projects in Culver City, California on March 2, 2019 and continues through March 23, 2019. You can see more of his paintings on his website and Instagram. (via booooooom) 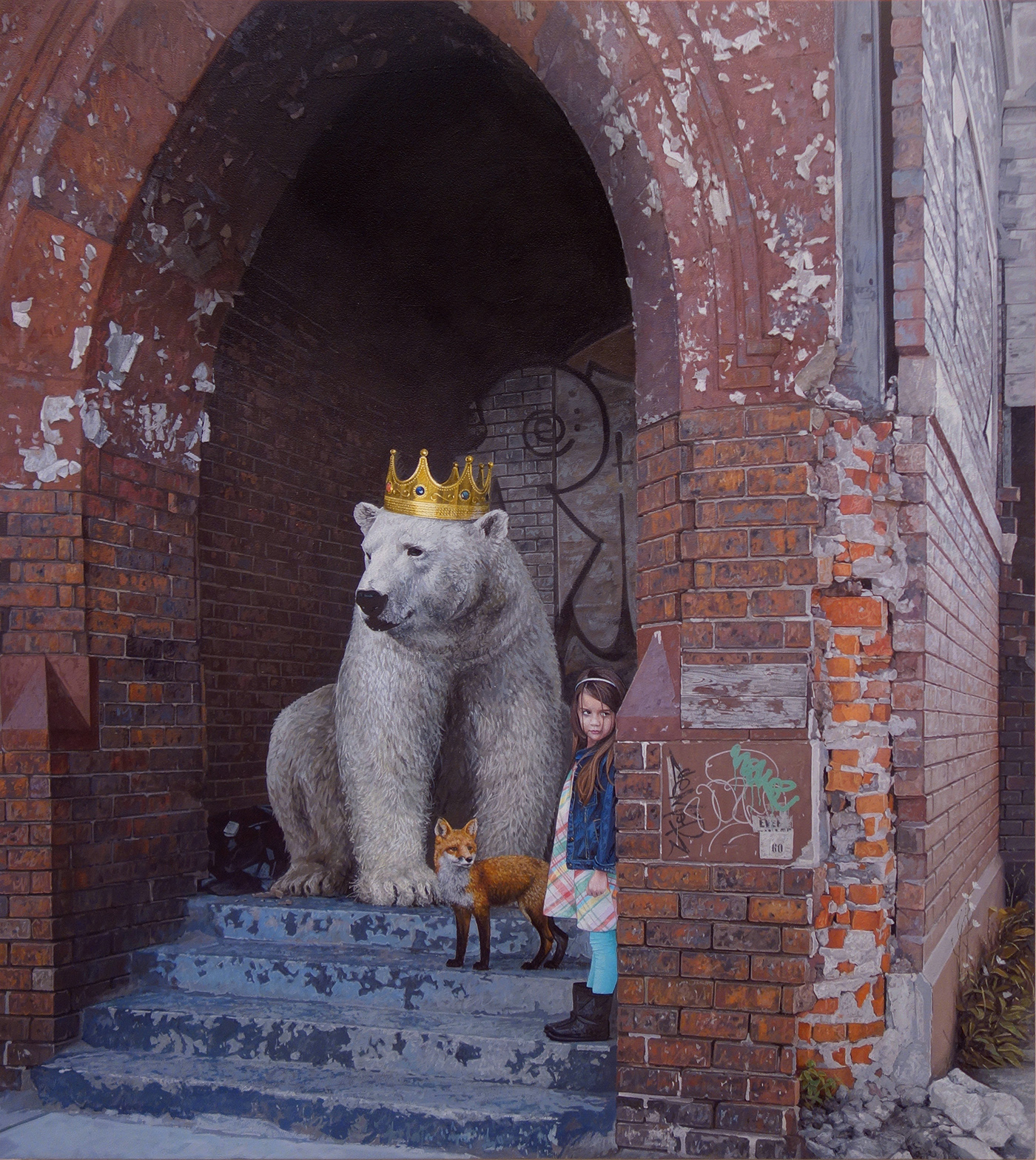 Kevin Peterson (previously) continues to paint detailed tableaux of young children and animals juxtaposed against dystopian urban environments. Solo kids, accompanied only by wild allies of polar bears, lions, and raccoons, are at the center of each painting surrounded by abandoned, decaying buildings. Whereas his earlier paintings showed the children striding forward and exploring, more recently his young subjects have been paused, seeming to be in moments of reflection or defiance.

Peterson studied fine art alongside psychology in college and his varied career included a graduate degree in social work and a job as a corrections officer before he returned to his art practice in 2005. The artist’s interest in psychology and societal dynamics helps inform the intention behind his works, which Peterson describes as dealing “with isolation, loneliness and longing teamed with a level of optimistic hope. Issues of race and the division of wealth have arisen in my recent work. This work deals with the idea of rigid boundaries, the hopeful breakdown of such restrictions, as well as questions about the forces that orchestrate our behavior.”

Peterson is based in Houston, Texas and is represented by Thinkspace Gallery in Culver City, California. He shares his works in progress and finished paintings on Instagram. Hyperrealist painter Kevin Peterson paints fairytale-like interactions of children and wolves, birds, and bears in scenes much different than the pastoral worlds of storybooks. Instead Peterson places the unlikely packs in distressed cities filled with decaying buildings and urban detritus. Despite the worn surroundings, the young girls in the paintings maintain a sense of innocence while they bravely explore the streets with their powerful compatriots.

“My work is about the varied journeys that we take through life,” explains Peterson in his artist statement. “It’s about growing up and living in a world that is broken. These paintings are about trauma, fear and loneliness and the strength that it takes to survive and thrive. They each contain the contrast of the untainted, young and innocent against a backdrop of a worn, ragged, and defiled world.”

The Houston-based artist studied at Austin College in Sherman, Texas where he received his BFA in 2001. Peterson is represented by Thinkspace Gallery in Culver City, California. You can see more of his work on their website and his Instagram. (via This Isn’t Happiness, Faith is Torment)