Seattle-based artist Casey Curran (previously) builds sculpture environments from wire, laser cut acrylic, aluminum, sculpted brass. His works appear in a constant state of growth and bloom, opening and closing with the assistance of motors or hand-cranked systems. These interactive systems invite the audience to not only watch his sculptures, but participate in their movement.

The works are inspired by complex systems in nature, yet aren’t obvious imitations of any particular  source plant or natural object. “When conceiving my pieces I center on a hidden narrative and begin to assign visual elements that aline with the concept of the piece, often utilizing ornate structures and simple construction methods to further highlight my interests in foundation and form,” Curran explains on his website. “In the process of creating I look for patterns in nature and symmetry in ecosystems. I look for how innovation shapes itself into our ever expanding systems of complexity and knowledge.”

You can see more of Curran’s kinetic sculptures in motion on Instagram and Vimeo.

A recently launched Kickstarter campaign introduces a five-dimensional sculpture said to be inspired by mathematics and the Fibonacci sequence. Square Wave, the first in a collection from artist Ivan Black (previously) and Atellani, is an object constructed out of 21 precisely bent and connected metal rods with no hidden mechanical components. The toy fluidly transitions into various shapes and patterns based on the amount of kinetic energy applied and the way it is held and turned.

According to the campaign, Black’s work is inspired by natural forms and the mathematical patterns found in nature. Designed in the UK and built in Italy, the optical illusion creating the Square Wave sculpture is a hypnotic amalgam of those two elements. It is meant to be handled and observed often. The sculptures are available in three finishes (lunar gold, metallic silver, and eclipse bronze) and are currently only available to those who back the campaign with a pledge. To see more of Ivan Black’s work, check out his Instagram. Taiwanese artist Shih Chieh Huang (previously) produces day-glow sculptures that illuminate, expand, and deflate—creating a whirling light show that both excites and relaxes the mind. His kinetic sculptures are powered by computer cooling fans and circuit breakers which are prominently incorporated into the works. Dozens of transparent plastic tentacles, LED lights, glowing liquids, and mechanical features give the pieces the appearance of bioluminescent underwater creatures who have adapted to survive in the far corners of the sea.

Huang told Colossal that his current solo exhibition Incubate at Ronald Feldman Gallery in New York addresses chaos, order, growth, and pattern, and uses brand new materials such as continuous wire, a peristaltic pump for neon liquids, and a urethane belt. His work will be included in the upcoming group exhibition Useless: Machines for Dreaming, Thinking, and Seeing at the Bronx Museum starting this upcoming Wednesday, March 27 and running through September 1, 2019. You can see more of Huang’s glowing sculptural works on his website and Instagram. A tour of his current exhibition at Ronald Feldman Gallery, which closes April 13, 2019, can be seen in the video below. 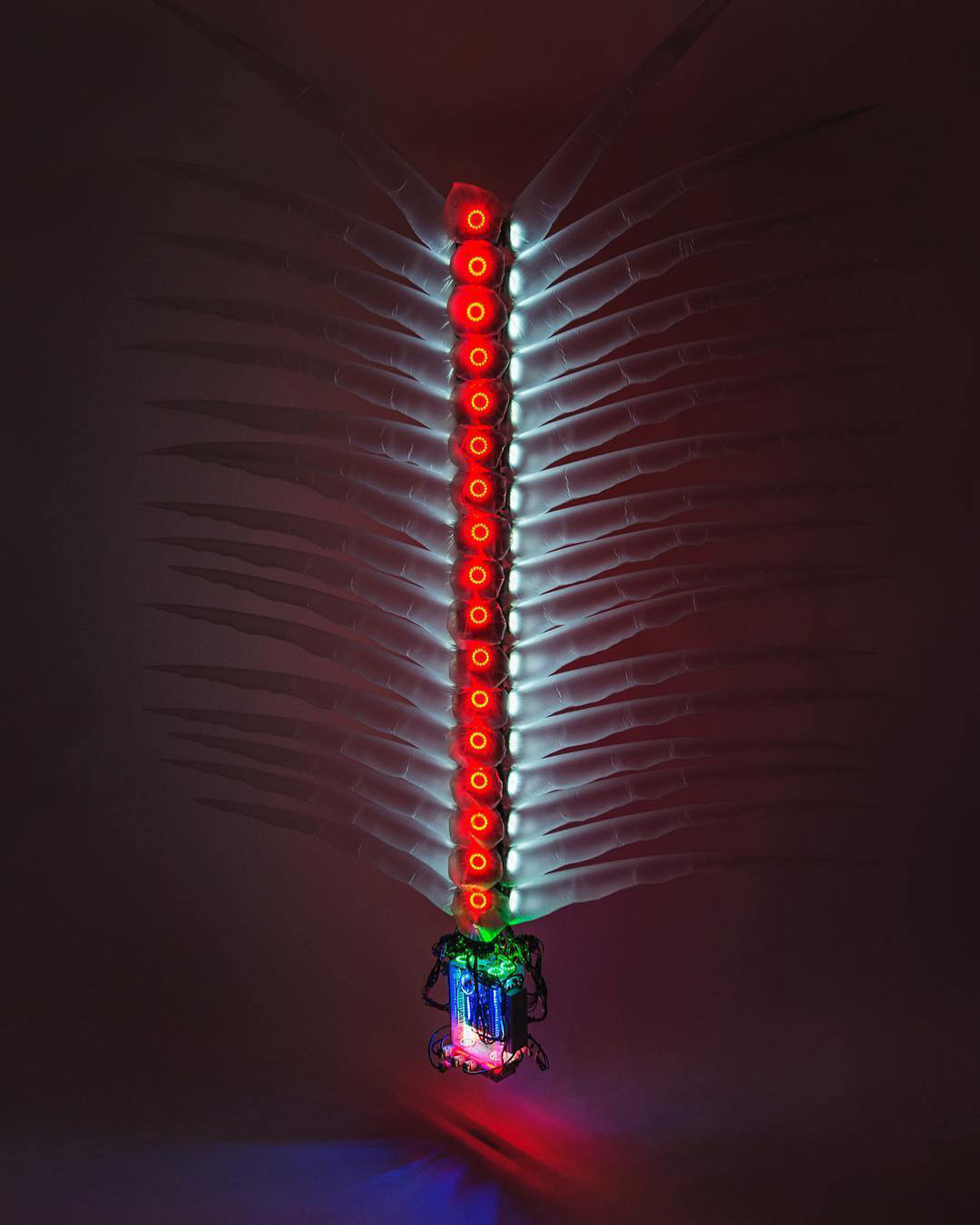 MINIMALS is a new short film by Helsinki-based animator and director Lucas Zanotto (previously) composed of fictionalized kinetic sculptures based on real animals. The series of short animations catch each simplified creature in a repetitive loop that imitates the extension of an elephant’s trunk, a crab’s sideways walk, or the incessant pecking of chickens. The animals appear to be formed from children’s blocks with colors that hint at their actual breed. Pink spheres with snouts are an easy give-away for pigs, while other configurations, like a flat mauve disk rolling across a slender beige cylinder, are a little bit harder to place. Zanotto’s second book, EVERIMAL, was published earlier this year. You can see more of his short animations on his Instagram and Vimeo.

The French creative company La Machine recently premiered their latest creation, a nearly 50-foot-tall robotic Minotaur, in Toulouse, France. The beast marched through the labyrinthine streets of the city’s old town accompanied by a 42-foot spider for the group’s latest production The Guardian of the Temple. The pair of machines performed an operatic interpretation of the myth of Ariadne, a Cretan princess who helped Theseus overcome the Minotaur, to live music. These impressive kinetic sculptures are La Machine’s latest project from their oeuvre of mechanical bestiary which has operating worldwide since 1999. Bringing together artists, technicians, and show decorators, this unique group of enthusiasts and experts construct atypical show objects, and movement is the key factor for their awe-inspiring performances and creations. La Machine’s animal-like works turn the cities into dream worlds. “We always work on movement,” La Machine’s head of marketing, Frédette Lampre tells Colossal. “It’s our artistic line and we always use the fine material such as wood, leather, copper, or glass, and never use plastics.”

The mechanical spider was constructed over the course of two years by a team of around 60 people. The mythical Minotaur machine is half electric and half combustion, and moves around the city with the help of 17 operators. Although this technical beast weighs over 10,000 pounds, it still has the capacity to move smoothly and realistically between the city’s large buildings and blast steam out of its large nostrils.

The performance was organized as an introduction of the newly repurposed Toulouse Aerospace district. After presenting their creations and projects throughout Germany, Belgium, Italy, Argentina, Chile, Japan, China, and Canada, their upcoming shows are scheduled for Nantes and Calais in France. You can see a portion of the Toulouse-based performance in the video below and view past productions on La Machine’s website, Instagram, and Youtube.  (via Dioniso Punk) 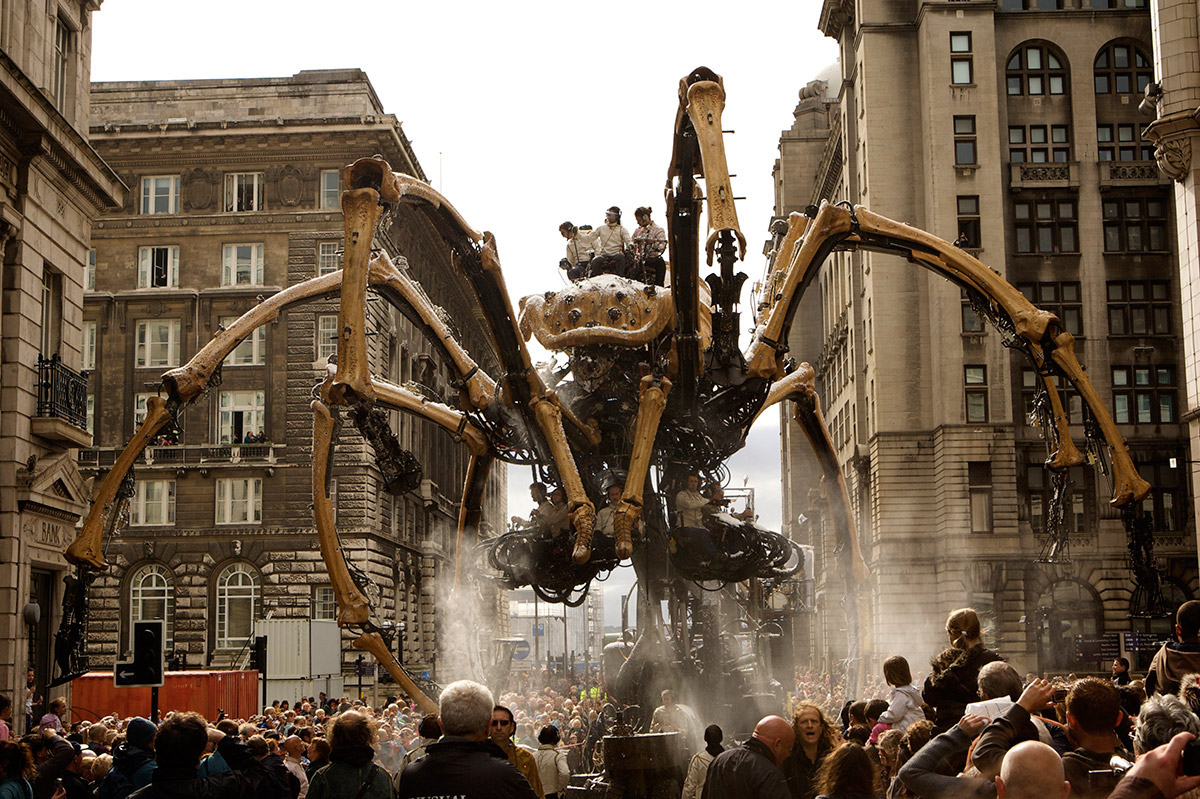