EYES is a short film by Lucas Zanotto (previously) showcasing several kinetic sculptures both built and filmed by the Helsinki-based director. Each installation is composed of simple parts that subtly imitate an action associated with one’s eyes. In one piece, two transparent globes slowly leak streams of water onto the floor below. In another, two black balls swing back and forth above an open book, slowly scanning the pages below. You can watch more of Zanotto’s videos on his Instagram and Vimeo, and take a look at all nine of his optical installations in the short piece above. Sound design by David Kamp. For the final iteration of his performance series Organic Concept, artist Shih Chieh Huang filled the Renaissance Court of the Worcester Art Museum with a gigantic worm-like sculpture. The work loops its way around the room’s staircases and columns, pulsing with the pressure of several box fans that keep the structure alive. For the last 15 years he has filled gardens, roadways, and malls with similar pieces, allowing rolled painter’s plastic to flail its way through each space it inhabits.

This particular installation was created for his recent solo show at the museum titled Reusable Universes: Shih Chieh Huang. Similar to the intestine-shaped sculpture, the pieces within his exhibition are made from common materials. Huang transforms ubiquitous objects into novel and complex forms, creating kinetic works that whir, blink, and subtly change colors in the museum’s darkened gallery.

“Sometimes when I look at these pieces,” Huang explained to Artnet about his installation, “I just see trash bags and fans, controlled in a certain way so that they’re moving; it’s very straightforward. But sometimes, I think that’s a cell, heart, a lung, a sea creature. I don’t want to tell the viewer how they should be looking.”

The installation is his most ambitious yet, with over one hundred various components. Formed mostly from plastic, the sculptures are not a comment on sustainable practices, but rather an exploration of the mechanical properties of each of his sourced gadgets. He hopes his low-tech works inspired a curiosity for experimentation in his audience, one akin to tinkering with modes of early technology.

Reusable Universes: Shih Chieh Huang will run through November 12, 2017 at the Worcester Art Museum in Massachusetts. You can hear him speak more about the connections between his mechanical creations and undersea life in a TED talk below. (via Hyperallergic) We’ve long marveled at artist John Edmark‘s (previously) kinetic objects that function as a medium to express a variety of mathematical formulas and concepts. The spiral-like sculptures often defy description and even when looking at them it’s hard to understand how they work, something he refers to as “instruments that amplify our awareness of the sometimes tenuous relationship between facts and perception.” The folks at SciFri recently visited with Edmark in his studio to learn more about how he works and to catch a glimpse of some rather unusual sculptures he’s created over the last few years. 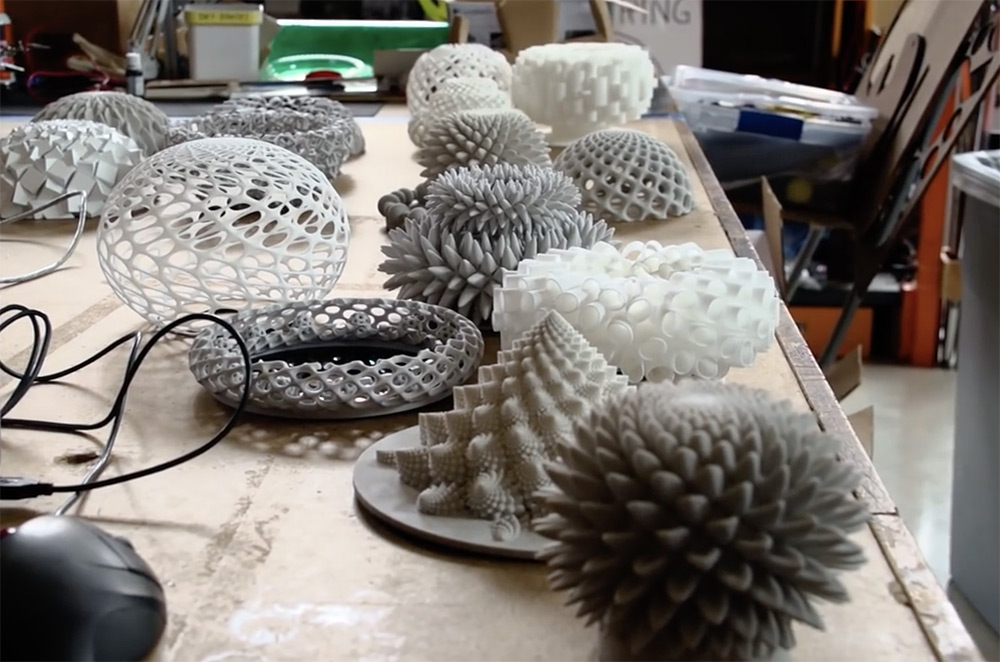 Seattle-based artist Casey Curran constructs elaborate kinetic sculptures primarily of brass wire that twist, bloom, flip, or wiggle depending on the subject. Some pieces rely on a motorized mechanism, but most of his artworks function with the help of a single hand crank that brings the piece to life. His latest piece titled “Bequeath these Seeds” was made for the 2016 Bellevue Arts Museum biennial show titled “Metalmorphosis”. Curran shares more of his latest kinetic works—including a kinetic cheetoh man—on Instagram.