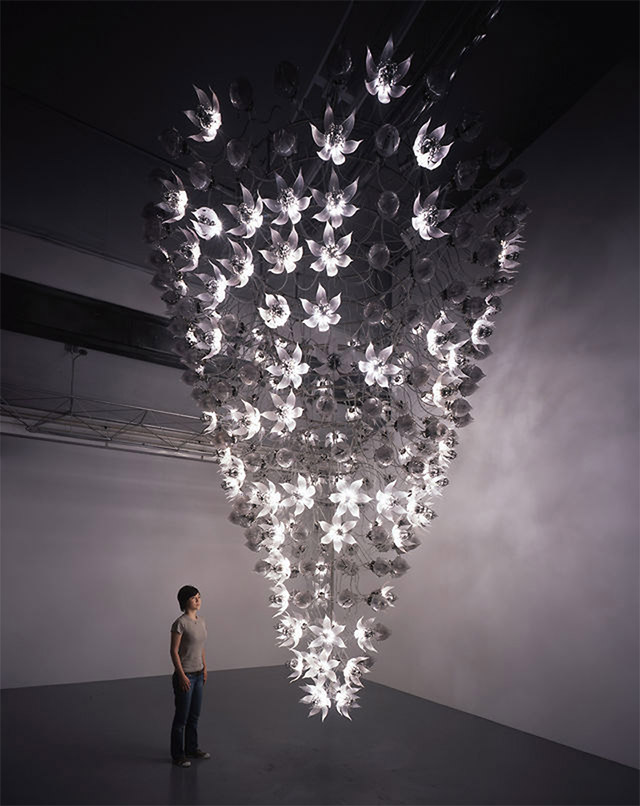 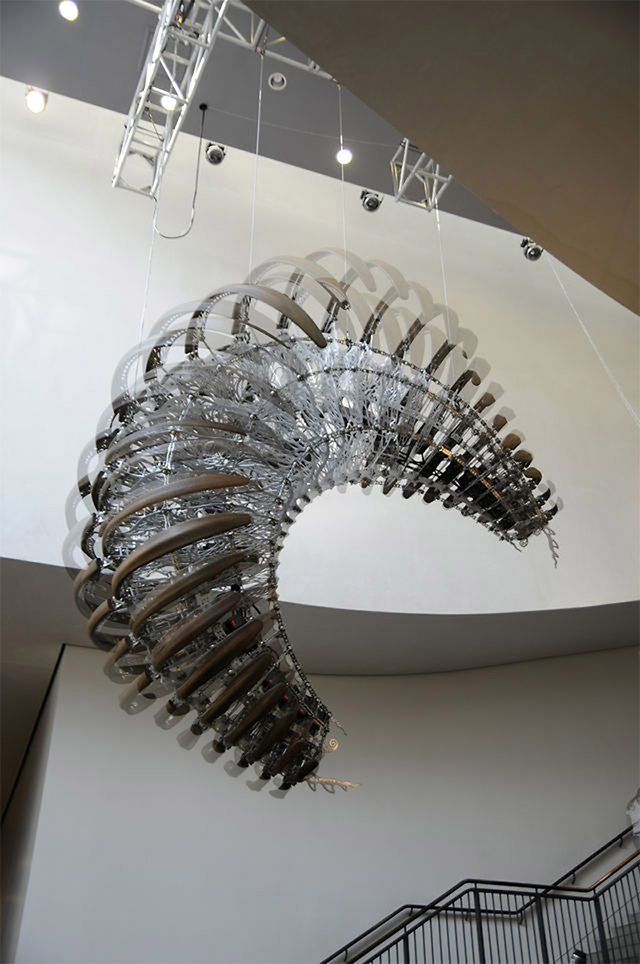 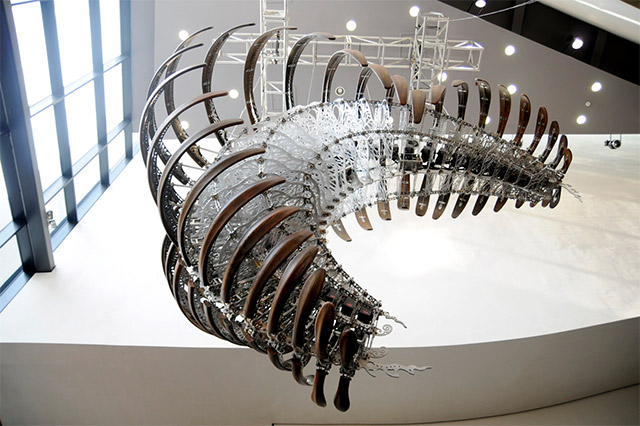 Korean artist U-Ram Choe lives and works in Seoul where he creates highly ornate kinetic sculptures that mimic forms and motions found in nature. Choe uses various metals, motors, gears, and custom CPU boards to control the precise motions of each sculpture that are at times perfectly synchronized and other times completely random. With names like “Unicus – cavum ad initium” and “Arbor Deus Pennatus” it’s clear the artist treats each new work like a brand new species.

The artworks are so complex each “organism” is shipped with a manual to show collectors and galleries how to maintain and fix various components. Choe tells the Creator’s Project in one of the videos above how some of the works in his studio live a complete lifecycle where they are at first born and put on display, but after time begin to degrade as certain parts stop working. Eventually he raids old artworks for parts and uses them to build new ones.

Watch the videos above to see a good sampling of his work both old and new, and he has a huge archive of videos for nearly 50 artworks over on Vimeo.

Kinetic sculptor Bob Potts creates beautiful kinetic sculptures that mimic the motions of flight and the oars of boats. Despite their intricacy the pieces are surprisingly minimal, Potts seems to use only the essential components needed to convey each motion without much ornamentation or flourish. There is very little information online about the artist, however blogger Daniel Busby managed to get a brief interview with the 70-year-old artist last year. If you liked this, also check the work of Dukno Yoon . Swiss designer and artist Paul Grundbacher makes incredible hand-cranked marble machines that he wrote about and filmed for Matthias Wandel’s Woodgears just this weekend. Grundbacher told Woodgears that he works mostly with firewood from a local factory and that he rarely sketches anything beforehand but has the ability to fashion each piece and try it as opposed to carefully measuring things out through any sort of blueprint. All the work here spans 2009-2012 and each piece is a mixture of his own ideas and tricks learned from watching videos of other artists creating similar wooden devices. You can read more about his inspiration and methodology behind each piece right here. (via mefi)

A Hovering Magnetic Cloud and Other Kinetic Sculptures by Laurent Debraux I’m really enjoying these kinetic sculptures by artist Laurent Debraux who works primarily with magnets, metallic objects and ferrofluid. The artist was just exhibiting at the Kinetica Art Fair in London and if you missed it head over to YouTube channel where you can catch over 30 videos of his work. As part of his senior thesis exhibition at Musashino Art University in Tokyo, art student Yasutoki Kariya re-imagined the ubiquitous desktop gadget, Newton’s Cradle, using a lovely sequence of light bulbs. Entitled Asobi (which translates roughly as “playing“) the 11-bulb installation creates a visual interpretation of the popular toy named after Sir Isaac Newton demonstrating his third law of motion regarding momentum: that for every action there is an equal and opposite reaction. However, instead of actual energy created by the kinetic force of steel balls, Kariya devised a method for using programmed light and two surreptitiously placed pistons to create this purely visual experience that’s arguably more mesmerizing than the original concept.

As an added super bonus, the team over at the Experiments in Motion blog created the animation above which easily contends for one of the most beautiful animated gifs I’ve ever seen, already racking up over 167,000 shares on Tumblr this weekend.

Asobi was nominated for the 2012 Mitsubishi Junior Designer Award. (via spoon & tamago)